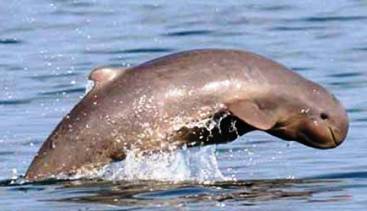 Pollution in the Mekong River has been blamed by an international conservation group for a downward trend in the river's population of Irrawaddy dolphins, which is rapidly approaching annihilation, according to an AFP report.

More than 50 dolphin calves that have died since 2003 have been found with toxic levels of pollutants including mercury and pesticides, The World Wide Fund for Nature (WWF) said in a press conference Wednesday.

At present there are between 64 and 76 Mekong Irrawaddy dolphins remaining in a 190 kilometer stretch of the Mekong shared by Cambodia and Laos.

A spokesman for the global environmental organization said the pollution could be coming from multiple sources upriver. Thailand, Laos, Myanmar and Yunnan are all upstream from the section of the Mekong inhabited by the dolphins.

The WWF said it is investigating the source of the contamination.

A report published by the United Nations said that plans to dam the Mekong in Yunnan, where it is known as the Lancang River, may pose the single greatest threat to the river's ecological survival. Yunnan is also a major exporter of fertilizers and pesticides to neighboring countries on the Mekong.

The announcement that the Mekong Irrawaddy dolphin was on the verge of becoming extinct illustrates how quickly fortunes can change for endangered species. As recently as 2007, when there were 160 Irrawaddy dolphins in the Mekong, there was optimism about the animal's survival chances, with some experts anticipating a population boom.

There goes another one! How long does it take before PC deference means we have another extinct animal? The greatest trick the devil ever pulled was convincing the world they were ignorant, and didn't know any better. Shameful.