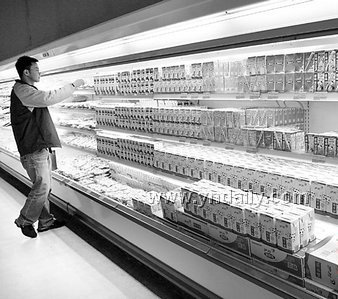 The Yunnan Provincial Quality and Technology Supervision Bureau recently announced that of the 43 licensed dairy producers in Yunnan, 19 have halted production either temporarily or permanently due to last year's melamine scandal, according to a Dushi Shibao report.

The Yunnan dairy industry is only beginning to recover from the scandal which broke last July when 16 infants in Gansu province were diagnosed with kidney stones caused by Sanlu milk powder containing melamine. In addition to Sanlu, dairy giants Mengniu, Yili, and Yashili were also found to be putting melamine in some of their products.

A spokesperson from Xingnong Dairy in Yingjiang, Dehong prefecture – located near Yunnan's border with Myanmar – said that the company had to halt production last year because all fresh milk sold in Yunnan had to be inspected, but there were only two official inspection stations, one in Kunming and one in Dali.

For Xingnong, this meant its milk took four days to get to market – a major problem for a product that relies upon freshness. The company has resumed production, but is no longer selling its products in Kunming. It is now only selling milk locally, with sales down one-third from before the melamine scandal.

Xingnong is not the only dairy company with sagging sales. An Yiliang Liziyuan Dairy Base spokesperson surnamed Li told Dushi Shibao that first quarter sales in 2009 have declined markedly when compared to the same period last year.

There was one undeniable bright spot for the Yunnan dairy industry during the melamine scandal – not one company's products tested positive for melamine content. The end result was local consumers trusting Yunnan milk products more than dairy products from other parts of the country. Perhaps the biggest winner from this confidence boost is Xuelan Dairy, one of Yunnan's largest milk producers.

According to government sources, the 19 Yunnan dairy companies that halted production were not only hurt by crumbling consumer confidence, but also by the onset of the global financial crisis. An official at the provincial Quality and Technology Supervision Bureau said that many local dairy companies provided milk powder for export-focused clients in China's coastal cities who experienced a dropoff in demand as a result of the crisis.

Overall, it seems that the bulk of Yunnan's dairy industry will survive the choppy waters of the last 10 months.

"Sales were the worst during the half year following the melamine scandal," Liziyuan's Li said. "Nowadays things have made a turn for the better."

there's one dairy that has great products like natural yogurt and cheese out of dali. it is owned by an american living there for many years - check them out.