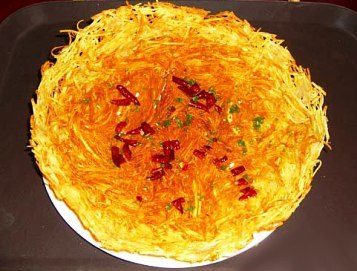 Yunnan-style hash brown - ganbei yangyusi
Whilst known as tudou (土豆, 'earth bean') elsewhere in China, in Yunnan it goes by the name yangyu (洋芋, 'foreign tuber'). The potato is popular in Yunnan, where it is featured number of classic local dishes. The Yunnanese take on the hash brown, known as ganbei yangyusi (干焙洋芋丝, 'dry baked potato strings') can be eaten any time of the day and goes well with most other dishes. It's also simple to make:

Method
Using a cleaver slice the potatoes into extremely thin slices. Cut the slices into equally thin strips as shown, then place in a bowl. Slice the chillies into a few pieces and put these along with the salt into the bowl and mix with the potato strips.

Heat a few tablespoons of oil in a wok, then dump the entire contents of the bowl into the wok in one go. Using a spatula press the mixture around the surface of the wok until you have formed a reasonably thin layer taking the shape of the wok. 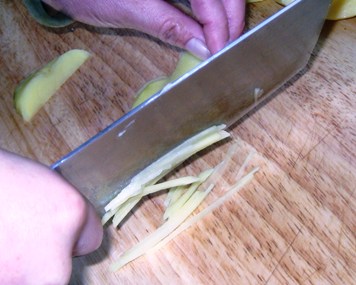 At this point it is time to get funky with your wok handling skills. In order to ensure you evenly cook the potato you should move the wok around, placing the flame directly below various points of your hash brown and frying for around 30 seconds at a time.

After a few minutes of this you need to turn your hash brown over so it is time to get even funkier with your wok. Remove it from the heat, hold it as far away from your body as you can and flip your hash brown – yes, flip that sucker just like a pancake. You can flip it more cautiously using your spatula if you wish. 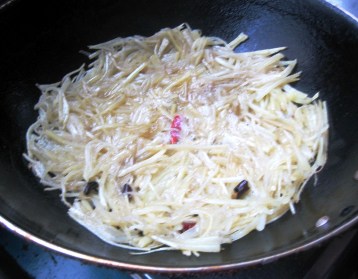 After flipping you need to cook the hash brown evenly around its circumference for another few minutes. When done remove the wok from the heat and drain the remaining oil into a bowl (for future use – nothing is wasted in a Yunnan kitchen). Transfer to a plate and serve.

This dish is served alongside the other dishes in a meal without any specific accompaniment. It is humbly suggested that serving with a small dish of soy sauce for dipping makes for improved eating.