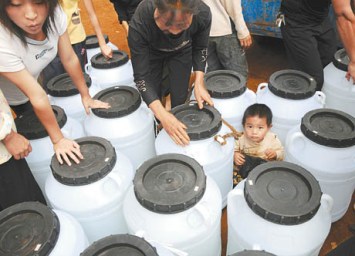 Kunming municipal officials intend to create a trial court which will only handle environment-related lawsuits, according to Chinese media reports.

Should the court be approved by the local government, it will handle criminal, civil and administration cases related to crimes against the environment. Defendants found guilty of such crimes will be "given severe punishments and must treat the areas they have polluted to clean them up," according to the reports.

The news comes shortly after reports of heavy arsenic contamination in Yangzonghai Lake. It is likely that a large percentage of the more than 26,000 people living around the lake had been ingesting arsenic-tainted water for years. Now the area is suffering a shortage of drinking water, with the government shipping in supplies (see image above).

Local officials in Kunming and the counties of Yiliang and Chengjiang are now engaged in finger-pointing and responsibility dodging, according to the website china.org.cn. According to reports:

According to a County official in charge of environmental protection, officials were unaware of the high levels of arsenic accumulation in Yangzonghai Lake until June 28, when they received calls from the Yunnan Provincial Government.

"We do not monitor Yangzonghai Lake, since Kunming City is responsible for that. They provide all our data. In the past, we knew little about arsenic pollution," he said.

However, an official from the Environmental Protection Bureau of Chengjiang County emphasized that they have been making efforts to monitor the Yunnan Chengjiang Jinye Corporation, but it refuses to abide by the relevant regulations. Between 2002 and 2008 the company has been fined six times for environmental pollution infringements. Although the maximum fine of 100,000 yuan (US$14,653.52) has been imposed several times, the sum is trivial in comparison to the company's profits.

Thus, this wasn't a case of turning a blind eye to polluters, it was a failure of the regulatory system to provide sufficient disincentives to pollution. In other words, the lake is polluted with arsenic because even maximum penalty amounts are so "trivial" that it makes economic sense to "pay to pollute."

Great coverage. There has been an increasing trend towards actual enforcement of environmental regs at the judicial level. Actually another local-level environmental court is being set up in Guiyang as well... I think Kunming's would only be the 2nd one in China, but I could be wrong.

It's great to see, after all these years of talk, that environmental policy might be starting to grow some teeth.
I've also read that a lot of Beijingers and city govt leaders are looking at how they can keep up the environmental improvements they made during the Olympics. Some good came out of those games after all.