British medical journal The Lancet has published a follow-up report in this week's issue about a man from Yunnan who successfully underwent facial transplant surgery in 2006, raising hopes that the difficult surgery will be more viable in the future. The man is the second person ever to have received a successful face transplant.

Farmer Li Guoxing of Yunnan's Lanping County was attacked by a bear in October 2004, resulting in major tissue damage on the right side of his face. Li reportedly had beat the bear with a stick after discovering it eating one of his sheep, leading to the bear disfiguring his face.

635The Nature Conservancy#http://www.gokunming.com/en/blog/item/581/the_nature_conservancy_working_with_china_to_protect_biodiversity#, which has operations in nearby Lijiang involving bear protection, that led to finding a suitable hospital for the operation he needed to re-enter society.

In an operation 18 months after his accident, the man underwent allograft tissue transplantation at Xijing Hospital and Fourth Military Medical University in the north Chinese city of Xi'an. He received an upper lip, nose, skin, muscle and even some facial bone from a 25-year-old donor who had died in a traffic accident. 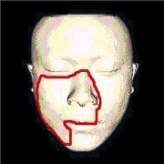 The man reportedly underwent treatments with four different drugs to modulate his immune system and minimize the risk that his body would reject the donated tissue. He was also given drugs to prevent infection.

Researchers in the Lancet hailed the transplant and treatment as a positive step forward for face transplant surgery, but emphasized the trickiness of such an operation.

"Facial transplantation could be successful in the short term, but the procedure is not without complications," the researchers wrote.

The Lancet report also reported another facial transplant after the Chinese man's, in which a French man with a massive facial tumor successfully received a new face in January 2007.

The two successful facial transplants follow the world's first face transplant, which took place in France in 2005. The recipient, Isabel Dinoire, had been attacked by a pet dog.

For more information about the transplants, The Lancet has produced a podcast on the subject.

The Nature Conservancy working with China to protect biodiversity