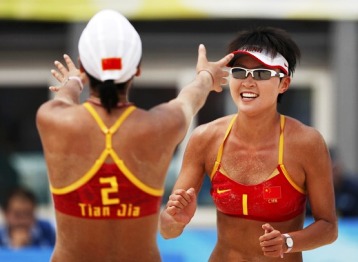 Since first appearing as an exhibition sport in the 1992 Barcelona Olympics and making its debut as a medal event in Atlanta four years later, the fast-paced sport of beach volleyball has quickly become one of the most popular Olympic events.

An easy-to-understand combination of power, speed and spandex, the sport pulled 3.5 billion viewing hours during the 2004 games in Athens and has already proven quite popular with Chinese audiences during this year's Beijing games, with spectators consistently packing the stands at the beach volleyball ground in Chaoyang Park.

As an Olympic sport, beach volleyball has been dominated by the triumvirate of Brazil, the US and Australia – no other countries have won gold medals in either men's or women's beach volleyball to date. Each country has won gold once in the women's event.

This year there may be a new world order in Olympic beach volleyball, as China has a good shot at joining the women's beach volleyball gold club. Fielding its best talent ever and enjoying a home-field advantage, China has two talented teams in the women's competition that are both considered serious medal contenders. 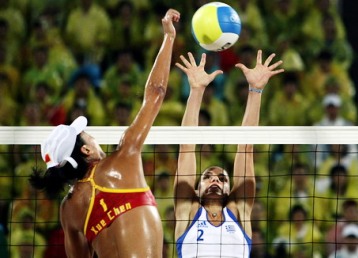 Tian Jia (田佳) and Wang Jie (王洁) – who beat Lea Schwer and Simone Kuhn of Switzerland 2:0 on Saturday – are top seeds in Pool A after placing second in the qualification round for the event. They are expected to advance beyond their group, which also includes Belgium and Norway.

China's other women's team, consisting of Zhang Xi (张希) and Xue Chen (薛晨), has also started off on the right foot in the Olympic tournament, beating Greece's Efthalia Koutroumanidou and Maria Tsiartsiani 2:1 in Chaoyang Park on Sunday. Zhang and Xue – who was named top rookie in 2006 by the International Federation of Volleyball - are playing in Pool D, which is rounded out by Germany and South Africa.

Zhang and Xue, both making their Olympic debut on Sunday, dropped one set to their Greek opponents, but according to Xue, who at 19 is the youngest beach volleyball player competing in Beijing, any Olympic jitters are behind them.

"We were a little bit strained in the game and the rivals are very strong, so we lost a set," Xue told Xinhua after the match, "But we'll be very confident in playing in the next matches," she said.