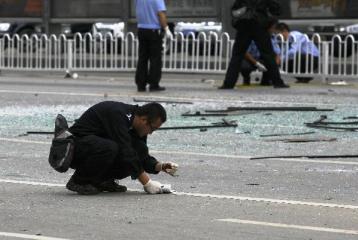 In the wake of yesterday's bomb attacks on two buses on Renmin Xi Lu, some new bits of information are trickling out through local media. Here are some of the latest developments:

Bomb material identified
A criminal investigation unit dispatched from Beijing arrived in Kunming yesterday afternoon. By 7:45 pm all on-site investigation for both explosions had basically concluded, with traffic returning to normal. Investigators have identified the explosive in both explosions as ammonium nitrate, a common fertilizer that is often used in homemade bombs.

Mysterious text message
As early as 5:00 am on Monday, some Kunming residents received what is being treated by police as possibly being a text message warning from the bomber(s), which reads: "I hope the city residents who receive this text message don't take the 54, 64 or 84 buses..." (希望收到此短信的市民,不要在明天早上乘坐54、64、及84路工[sic]交车......).

The sender, whose number displayed as anonymous, referred to him/herself as "the mobilizer of nobodies" (蝼蚁总动员). Police have confirmed that numerous people received this message the morning of the explosions.

Most injured recovering
Thirteen of the 14 injured in yesterday's explosion are in stable condition, with one victim, a woman, still in the intensive care unit at Kunming First Affiliated Hospital in critical condition.

One of the injured is a pregnant woman who herself is fine but her fetus is still undergoing tests. Most of the injured suffered at least one broken eardrum and some skin damage.

Update: The New York Times is reporting the first mentions of a possible suspect:

"Witnesses on one bus told Chinese newspapers that a short man in a black shirt and gray pants boarded the bus before the explosion and sat behind the driver. After the bus stopped and then prepared to get going again, the man jumped up and yelled for the driver to let him off, the witnesses said.

"Witnesses told a joint reporting team from the Yunnan Information Daily and the Southern Newspaper Group that the man had left a black leather bag on the bus. About 30 seconds later, the bus exploded. Witnesses on the second bus told Chinese journalists they had also seen a black bag."

Update: Kunming vice mayor Du Min has been quoted by Xinhua as saying that there was no text message prior to Monday's explosions, according to a Reuters report.

"In fact, there was no such message," Xinhua news agency quoted Du as saying on Tuesday, according to Reuters.

Here is the link to a collaborative google map. everyone can edit it:

(be careful, satellite view does not match the chinese map)

That was so terrible. Hope those injured people getting better soon......

cedricm1234, I think your placement of this ad here is tasteless and totally inappropriate. Are you trying to have a "terrorist victim fashion show" or something?

I think you need to update your UPDATE! Here is a photo image of the "ants" text message that Kunming police chief/deputy mayor Du Min somehow says does not exist. The link below is from Shanghai Oriental Morning Post news reporters who are now working in Kunming:

Let's hear what Mr. Du Min has to say about the text message at his next press conference!