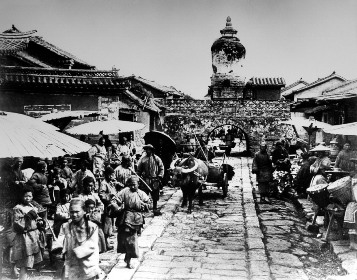 While much of present-day China was under the rule of the flourishing Tang Dynasty, Yunnan was part of the Nanzhao Kingdom (南诏), an upstart regional power whose territory at one point would stretch from Chengdu to northern Thailand and from northern Myanmar to Guizhou.

Kunming first began to emerge as a major settlement – it was originally known as Tuodong (拓东) – more than a millennium ago, during the height of the Nanzhao's reign in the Eighth and Ninth Centuries. Based in Dali, the Nanzhao is known for its penchant for pagodas, and it left its mark on Kunming with several structures, some of which are still standing, while others such as the White Pagoda (白塔, Baita) – succumbed to the pressures of urban development.

The White Pagoda, highlighted in the above photograph by Auguste François taken in 1901, has the unfortunate distinction of being one of the first important architectural structures in Kunming to be demolished to make way for increasing traffic. Back in 1901 there were no BMWs, SUVs or even QQs choking the streets – traffic tended to consist of pedestrians and the odd water buffalo cart.

By 1913, the Nanzhao had been nonexistent for 1,000 years and Tuodong had been going by its new name of Kunming for only one year. Five years before, the city was officially opened to foreign trade as an inland treaty port – a development which led to its first period of rapid growth. Kunming was highly coveted by France, which had three years earlier completed a railway linking the city with the port of Haiphong in present-day Vietnam.

As traffic flow reached new levels of congestion, it was decided by the city government that the White Pagoda, with its narrow tunnel and low overhead, would have to be demolished to make way for modernity. Today the sacrifice of the White Pagoda is commemorated by the name of the street that runs through where it once stood for more than 1,000 years – Baita Lu (白塔路).

The image below is a photograph taken in May, 2008 by GoKunming – 107 years after François preserved the White Pagoda on film. 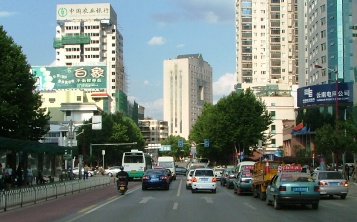 Construction of 'Turtle Back' throws Kunming traffic into chaos

nice article but kind of confused why you didn't take a picture of the new, reconstructed baita?