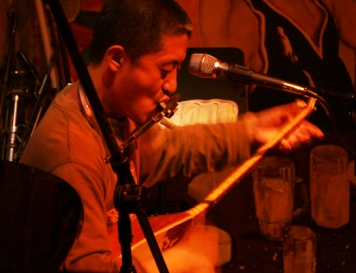 Gansu folk musician Zhang Quan (张佺) is to perform in Kunming this Saturday at Halfway House, his first performance in Kunming since January 2007.

Strongly influenced by Chinese northwestern folk music as he grew up, Zhang Quan joined the now-defunct Beijing folk band Wild Children in 1995 and until one of his bandmates passed away in 2003. Zhang was also the co-owner of the influential folk music venue River Bar in Beijing.

Zhang moved to Yunnan in 2004 and in 2006 he had a solo tour that passed through Sichuan, Yunnan, Gansu, Qinghai and Tibet. Currently Zhang Quan plays the dombra, a Kazakh instrument with a sound similar to a banjo or a lute, and harmonica.

This Saturday night's show is entitled Ballad of the Yellow River, which will include re-presentation of Zhang's earlier works, Chinese northwestern folk songs and his recent dombra and harmonica works. The performance will start at 9:30 pm, tickets to the show are 15 yuan.