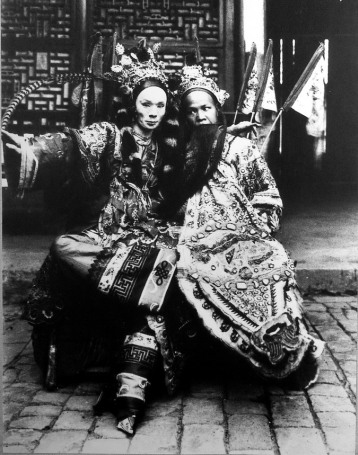 Year: 1902
Subject: Kunming opera performers at a tanghui
Location: In a courtyard home near Cuihu

Background:
The above photograph depicts performers at a 1902 Kunming tanghui (堂会) – a private party in which opera is performed.

These performers are some of the most famous opera performers in Kunming at the beginning of the 21st Century, invited to play at an engagement party for the second son of Yunnan's wealthiest banker at the time – Wang Zhi (王枳). Auguste François, who took the photo, as French consul in Kunming, was a rare foreign VIP for such an event.

Both of the performers in the photo are men – men typically played women's roles in Kunming opera as well as in other types of Chinese opera. Kunming opera, aka Dianxi (滇戏) traces its artistic roots to Kunqu (昆曲) a form of Chinese opera originating in Kunshan, in eastern China's Jiangsu province.

The female 'actress', or danjiao (旦角), on the left is a man named Li Shaobai (李少白), who was Kunming's most famous danjiao in 1902. At the time, footbinding was still a common practice, so danjiao such as Li would wear fake bound feet when performing, a factor which increased the already high level of difficulty of performing in an opera.

The photo below – also taken by François at the same tanghui - features an 'actress' (left), displaying fake bound feet, while a curious onlooker steps into the shot. 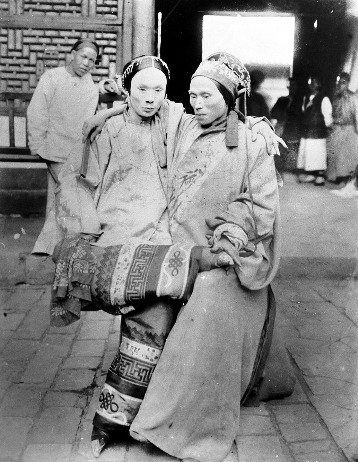 Ranbu Xiang: From cloth to potatoes