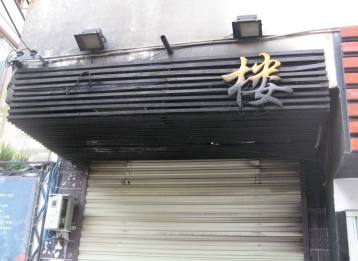 A branch of the popular Wenhua Xiang eatery Guozi Lou (锅子楼) sustained severe fire damage after a gas canister in the kitchen exploded at 9:10 pm last Friday night. Members of the kitchen staff suffered burns to their hair and clothes, though no serious injuries have been reported in local media coverage of the fire.

After unsuccessfully attempting to put out the fire with an in-house extinguisher, kitchen staff immediately notified local police who dispatched several fire trucks to the scene. According to eyewitness accounts, no customers were dining at the time, and the flames were extinguished before any further damage or injuries occurred.

Residents living above the restaurant reported that flames reached as high as the fourth story, damaging windowpanes and anti-theft window bars located on apartment balconies. At Guozi Lou itself, the front door became unhinged and the restaurant sign was almost completely destroyed with only one character remaining (see above image).

One observer noted that the damage would have been far worse had the local police not dispersed cars parked on Wenhua Xiang, thus allowing firemen unfettered access to the disaster site.

Friday's fire was the third to strike a Wenhua Xiang restaurant in the past two years. According to residents, all three were caused by gas canister explosions. A local resident surnamed Huang remarked, "Not only do we have to deal with loud noise and street lamps, but now we're under regular threat from restaurant fires."

There was no word from local authorities regarding whether measures will be implemented to prevent a repeat of Friday's near-disaster. As of this writing, all Wenhua Xiang Guozi Lou branches are closed indefinitely.

hey,tude, can i ask u a question? errrrrrr, I heard of there are some old French Cafes in Kunming, but where are they? thanx. By the way, I'm a local person lived here for 24 years, and wanna make friend with u, you can add me as friend in facebook: kmtrybhczucc@msn.com