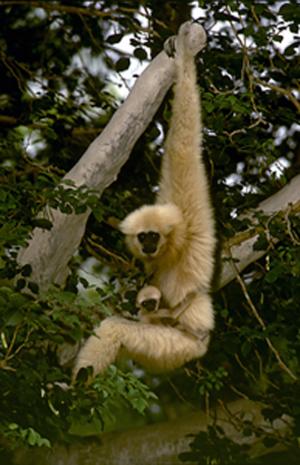 Following the chilling announcement by the World Wildlife Fund that world animal populations have dropped by roughly 25 percent since 1970, another animal native to China has been declared extinct.

A research team of anthropologists from Zurich University working in conjunction with the Kunming Institute of Zoology declared the Yunnan white-handed gibbon to be extinct. The ape was last seen in 1988 in Yunnan's Nangunhe Nature Reserve. Its loud, melodious calls were last heard by humans in 1992.

The Yunnan white-handed gibbon, aka Hylobates lar, is the most notable Chinese animal to go extinct since the Yangtze River's baiji dolphin, which was declared extinct by experts last year, only to have a Baiji dolphin spotted in the river shortly thereafter.

"This loss is particularly tragic", said anthropologist Thomas Geissmann, "because the extinct Chinese population was described as a distinct subspecies, the so-called Yunnan white-handed gibbon." Geissmann now hopes that the subspecies may have survived in neighbouring Myanmar, but so far, he has no evidence for this.

The loss of the Yunnan white-handed gibbon is being viewed by experts as a potential harbinger of doom for other Chinese apes. China is home to a unique diversity of apes, but most of them are currently endangered. China's native ape populations are disappearing at an alarming rate, primarily due to forest destruction, fragmentation and deterioration – as well as hunting.

"We hope that our research results will alarm the Chinese government as well as international conservation agencies and encourage them to initiate immediate efforts to save China's last surviving apes", says Geissmann.

This story, and its' accompanying 'related article' can only be described as extraordinary. Governments, at all levels, must have their attention drawn to the seriousness of the situation. But, as long as the restaurants have fish on the menu, everything may seem acceptable.
Sorry to be cynical - so easy in China.