After its arrival on Saturday in Sanya, Hainan province, the Olympic torch (奥运火炬) has begun its winding path through the Chinese mainland, with Beijing its final destination on August 8. The torch will pass through all of China's administrative regions, including Yunnan from June 7 to June 9, according to a report on Sohu.com.

The torch will make three appearances in Yunnan province, winding through the cities of Kunming, Lijiang and Shangri-la. Each city will feature 208 torch carriers, or 624 in total for the province, the Sohu report said, citing the Yunnan Provincial Athletic Bureau. Torchbearers were selected by the provincial government, city governments, China's Olympic committee plus corporate sponsors of the games. 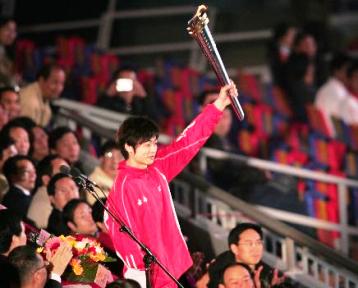 Torchbearers in Yunnan will range in age from 15 to 82 and will include nationally famous policeman Fang Hongxiao (方红霄), singer Zongyongzhuoma (宗庸卓玛) and gold medalist paralympian swimmer Wang Xiaofu (王晓福), pictured above.

Meanwhile, the third and final phase of Olympic ticket sales have commenced and will run through Friday. Initial reports suggest that this phase of ticket sales and distribution will be as trying as the previous two, with some purchasers luckier than others.

Olympic torch to pass through Yunnan