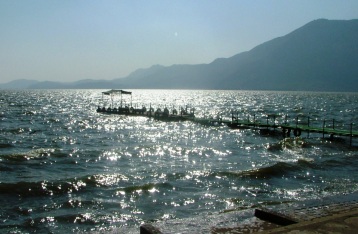 Yunnan province announced plans this week to spend 30 billion yuan (US$4.29 billion) over the next three years addressing the pollution of Dianchi Lake, China's sixth-largest freshwater lake and the largest lake on the Yunnan-Guizhou Plateau.

Qin Guangrong, governor of Yunnan, described the cleanup work on Dianchi as 'top priority' for building a modern Kunming – which borders the lake on its northeast - according to a Xinhua report. Qin said the project consists of six sub-programs, including pollution interception along the 29 rivers that feed into the lake, plus "ecological protection, dredging, and others". Several wastewater treatment plants will also be built under the project.

Also part of the plan is a scheme to resettle approximately 30,000 lakeside residents in an attempt to restore wetlands in the area by 2010, the report said. Yunnan has spent billions of dollars on reducing pollution in the 300-square-kilometer lake with little to show for it in terms of results. China's major lakes, including Dianchi, Taihu and Chaohu, are suffering from algae blooms that are destroying the lake ecosystems by depleting the water's oxygen content. The central government aims to return the lakes to their 'original state' by 2030.

The announcement by Governor Qin follows recent commercial interest in cleaning up Dianchi. Last year Hong Kong-listed property developer Shui On Land announced that it intended to "thoroughly restore" Dianchi as part of its Caohai Urban North Shore project. The project will dedicate 87 hectares to a mix of high-, medium- and low-density housing and 29 hectares to cultural infrastructure including museums, theaters, an amphitheater and an "artist's community".

According to a Shui On press release, the plan involves a short-term strategy of creating a lake "cell" isolated from the rest of the lake and filling it with clean water. Once the lake has reached a level of recreational cleanliness, the lake cell and the lake will be combined.

As one who left China fifty-two years ago, I yearn to see and live China again. Though I have made many trips in recent years, I have seen too little of this vast and diverse country, my home country.
I do urge the power that be to safeguard your tourism resources. They can never become obsolete, and learn from elsewhere, don't let the motor car rule your life.