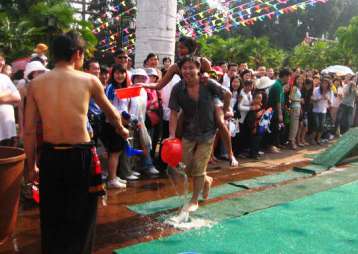 Kunming residents unable to make the 700km trip to Xishuangbanna's Water Splashing Festival (泼水节) can opt for a bucket of water poured down their collar – or a squirt gun to the face - at the Yunnan Nationalities Village (云南民族村) this week.

GoKunming joined a large number of visitors looking to get wet and celebrate the Water Splashing Festival on Sunday. A major part of the Dai minority's New Year celebrations, people splash each other with water to symbolise cleansing and blessing for the new year.

From 8:30am visitors entering the park from through the colourful paper umbrella archways were squirted by super soaker-wielding Dai ladies using their information office as a bunker.

The festival is one of the most important times of the year for Yunnan's Dai people, as well as Thais, Laotians, Burmese, Cambodians and even Sri Lankans.

Stalls located throughout the park were selling a variety of hydro-powered weapons, from 80-yuan jumbo soakers with a 35-foot firing range right down to the cheapest (and perhaps most effective) option: the humble five-yuan plastic basin.

One of the day's main events was a water-carrying relay race in the park's Tuanjie Square. Two teams comprised of audience members ran across balancing beams, carting water to the other side using wheelbarrows, bamboo pipes (gaosheng), clay pots suspended on a yoke or by piggy-backing a wet female team member.

The park was a mix of topless youths, well-armed children, older men, the occasional raincoat-wearing couple and staff dressed in minority costumes, guarding against attacks with umbrellas.

Another minority at the park was a group of foreign students who left the park saturated with the yellow water of Dianchi Lake after engaging in a torrid but good-natured water war with local visitors. Their antics drew a large crowd of spectators and the attention of the park's security officers who rushed to their defence after thinking they were being prevented from exiting the premises. 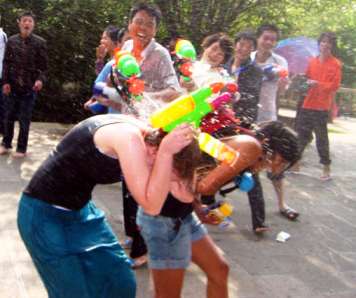 Yunnan Nationalities Village will celebrate Water Splashing Festival until Sunday 20 April, Tuesday the 15th (tomorrow) being Dai New Year. Other planned festivities include a large-scale song and dance show, water splashing games and relay races. Yunnan Nationalities Village is located in Kunming's southwest at 1310 Dianchi Lu and is open from 8:30 am to 10:00 pm. Entry is 70 yuan or 35 yuan for students with ID.

Celebrate Cantina's 6th Anniversary with us!

Synesthesia at The Turtle Bar!