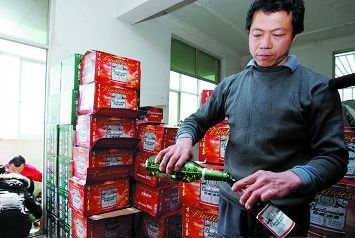 One of the more colorful old sayings in Chinese is "selling dog meat and hanging a sheep's head" (卖狗肉挂羊头) - an expression that conveys how pervasive counterfeit products have been throughout the country's history.

There is very little in China that cannot be counterfeited – that includes beer too, as the Xishan Bureau of Commerce confirmed on Tuesday when it raided a rented space behind a cement factory in the Majie area that contained more than 20,000 bottles of fake Budweiser and Carlsberg beers.

The secret behind the scam: taking a big, cheap bottle of Henan province's Kingstar Beer (金星啤酒), and splitting its contents between two smaller Budweiser or Carlsberg bottles and a bottle-capping machine to fix caps to the top of the bottles. The total time it takes to increase the Kingstar's value up to ten times – ten seconds.

A former worker at the facility who was asked by the government to demonstrate how to turn a 610 milliliter Kingstar Beer into two 300 milliliter Budweisers (see image above) said that experienced workers could make two fake beers in around five seconds – making as many as more than 1,000 fake Budweisers or Carlsbergs in one evening. 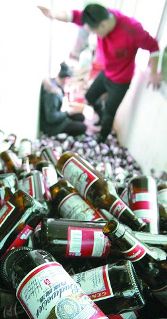 The repackaging of the Kingstar beer as smaller, more expensive imported beers is then followed by an arguably more crucial step in the counterfeiting process. Once sealed, the beers were placed in large woks connected to gas burners. Each wok used a thermometer to monitor temperature, with 80 degrees Celsius the ideal temperature to maintain.

'Cooking' the beer has two reasons behind it. Firstly, Kingstar beer tends to have more flavor than Budweiser or Carlsberg – raising its temperature rendered the beer's flavor less strong. Secondly, cooking the beers ensured that upon opening, the beers would bubble up and produce a foamy head.

During Tuesday's raid, six 'northeasterners' were arrested at the counterfeit beer operation, authorities say they suspect the leader of the ring is also from northeastern China.

An investigation by the municipal commerce bureau is underway and has already discovered that the operation would go to KTVs, nightclubs and bars to collect used Budweiser and Carlsberg bottles which were then refilled with Kingstar, cooked and sold back to Kunming's entertainment establishments.

Kingstar beer costs two to three yuan per bottle, after being repackaged as two smaller import beers, the same beer could be resold for 10 to 20 yuan – a respectable profit margin of up to 1,000 percent. It is estimated that the 20,000 bottles of beer seized and destroyed in the raid would have been sold as the genuine article for between 100,000 and 200,000 yuan.