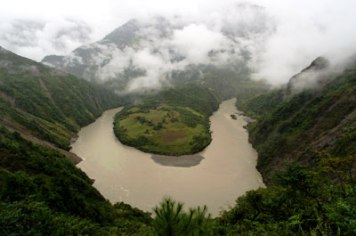 Little more than two months after the announcement that Tiger Leaping Gorge will not be dammed, plans for damming the Nu River (怒江) in western Yunnan near the border with Myanmar may become the focus of the next battle between Yunnan officials and environmentalists and scientists.

A plan to dam the upper reaches of the Nu, known as the Salween River after flowing out of Yunnan into Myanmar, was originally suspended in 2004 by Premier Wen Jiabao. Premier Wen's order to conduct an environmental impact study of damming the river was considered one of the first major victories for China's nascent environmental movement.

Yesterday in Beijing, during the annual meeting of the National People's Congress – China's Parliament – the Nu River came back into focus as Yunnan province's Communist Party chief and trained engineer Bai Enpei (白恩培) told reporters that the provincial government still intends to build dams and hydropower stations on the river, according to an International Herald Tribune report.

"We are actively pushing the development of hydropower plants, including on the Nu River," the IHT quoted Bai as saying. "But their construction must take into account those downstream. And the environment must be protected. The people must also benefit."

A section of the Nu River flowing parallel to the upper reaches of the Yangtze and Mekong rivers is included in the Three Parallel Rivers Protected Areas, which are inscribed on UNESCO's World Heritage List.

Bai also reportedly argued that impoverished local conditions along the Nu have led to environmental degradation, including rampant tree-cutting. He said that there was still work to do to convince Myanmar's ruling military junta that the dams would not be a problem for Myanmar, adding that he didn't think that would be a problem.

In a challenge to Chinese and international environmental groups – several of which have offices in Kunming – Bai said it was unfair to deny people living in the Nu River valley the chance at economic development.
"You cannot expect the people of the Nu River to keep wearing animal skins and bring in everyone to have a look in the name of ecotourism," the IHT quoted Bai as saying.

I loved this quote: "He said that there was still work to do to convince Myanmar's ruling military junta that the dams would not be a problem for Myanmar, adding that he didn't think that would be a problem." I wonder if it should have been highlighted? Additionally, I wonder, does the UNESCO's World Heritage List serve a purpose? :(