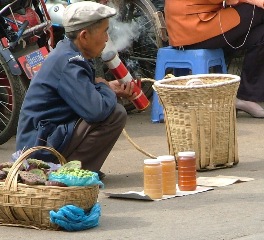 First-time visitors and new arrivals to Kunming typically have a lot of questions. One of the most common questions is: "Why are people smoking bongs everywhere?"

Throughout Yunnan province, many people spend quite a bit of their day smoking locally-grown tobacco — Yunnan is the main producer of China's tobacco — out of their yantong (烟筒), the Chinese name for the bong. And it's not just country folk doing this (although they dig it the most). Government officials and businesspeople also like to puff Yunnan's finest from their plastic bongs.

Even though Yunnan is somewhat famous for the loads of cannabis growing wild throughout the province, we've never seen locals do anything with their yantongs other than smoke lit ciggies or loose tobacco bought at local dry goods markets.

Bongs can be part of the guanxi process when doing business in Kunming. One source with a foreign-owned company in town said he once bonged some tobacco with a municipal official who was adamant that he try some Yunnan tobacco in the local way. An American businessman returning home after a business trip to Kunming last year had a bit of explaining to do at US Customs when they asked him about the large aluminum yantong he was carrying. It happened to be a gift from a provincial official and he was allowed to keep it.

The Yunnan bong phenomenon is good for a laugh, but if you're actually going to try and bong some tobacco, be forewarned: Yunnan tobacco is quite strong, and smoking it from a yantong will likely knock you on your ass.

nice shot of the honeyman. seriously, do a whole entry on him. he is a legend.