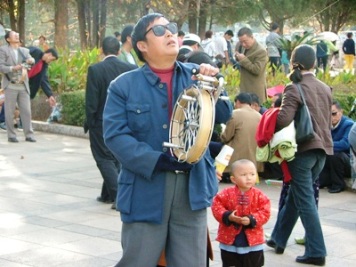 More than 60 percent of Kunming residents consider themselves "happy" or "well-off" according to a new Kunming Daily survey of 1,000 randomly selected people who have lived in Kunming at least three months. The survey also identified some of the biggest obstacles to happiness in the Spring City, with housing conditions topping the list of reasons that people are unhappy. 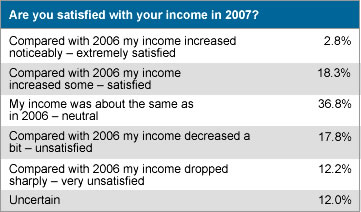 According to the survey, the biggest influences on happiness in Kunming were generally tied to one's economic situation. These factors include one's housing situation, income, medical condition and social environment. Respondents with income of less than 400 yuan per month reported the highest levels of dissatisfaction and unhappiness. Responses by people making between 1,000 and 10,000 yuan each month showed comparable levels of satisfaction and dissatisfaction with their lives in Kunming.

Retirees over the age of 60 reported the highest levels of happiness – a statistic that seems to validate Kunming's emergence as a popular place for wealthy mainland Chinese to buy their retirement homes. On the other side of things, many respondents aged 20 to 29 and 30 to 39 reported that they often suffer from low energy, feelings of stagnation and frustration. 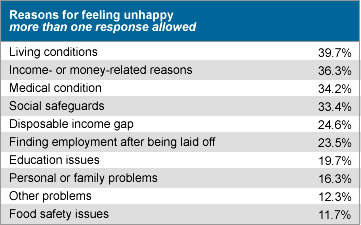 Perhaps the biggest surprise is that respondents under the age of 19 reported the lowest levels of satisfaction with their lives. Not surprisingly, academic pressures were cited as the primary factor for unhappiness among teenagers and children.

I think having a child in this day and age is insane. To put a child in school now is inhumane and borders on child abuse. Kids are in school all day, followed by evening classes such as english or piano or some other ridiculous thing, then homework till all hours of the night. Pressure from all directions and no time to be a kid. I would hate to be a kid now - anywhere!

My wife's classmate's
daughter jumped off their 15th floor hi-rise. She was 14 years old. The reason: Too much pressure from school and parents. That what she told me. They really do overdo it here. The plus side is that there's little time to cause trouble hanging out.

Surely you are only referring to Asia? I know the schools in Japan and South Korea are the same, if not worse than here when it comes to slave driving the students.

Primary schools in England are really laid back. At school from Monday to Friday 9 am til 3pm, little homework and plenty of long holidays. The kids there really have time to, well, just be kids.

@HFCAMPO
Rural schools. While there's a low probability of those kids ever making it to university, much less high school - they look genuinely happy to be at school.

Nobody cares about the happiness of children, people only want to say: Chinese students are the top MATH students in the world !

Too bad general culture has been declining and seems to have adhered to what Ernest Gombrich used to call "idola quantitatis", the worship of quantities and numbers.

@Spartans: I don't know Gombrich, but the concept sounds like what we've all been up to our ears in for a very long time - has to do with the nature of money and the profit system, gone viral.