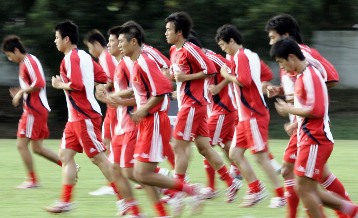 Kunming's Tuodong Stadium has been selected as the site of the March 26 World Cup qualifying match between China and Australia's national soccer (football) teams as they fight to advance through what has been dubbed the "group of death" – a qualifying group that also includes powerhouses Iraq and Qatar. Only the group winner and runner-up will advance to the World Cup.

Each team will bear its own unique burden going into the stadium, with the ultimate goal of qualifying for the 2010 World Cup in South Africa.

For China, the pressure to qualify for the World Cup is immense. China has only managed to qualify for the global soccer tournament once – in 2002, by beating Oman in the freezing weather of wintry Shenyang. After failing to qualify for the 2006 World Cup and with the country preparing to hold the Olympics this year, there is national pride at stake, but there is also a hefty bonus riding on the team's ability to qualify.

The China Football Association has pledged to give eight million yuan to the national team should it qualify for the 2010 World Cup. Furthermore, the team will receive 500,000 yuan for each victory over a nation ranked in the world top 50 and 300,000 yuan for defeating lesser-ranked teams.

Last week the Beijing Youth Daily reported that the Chinese team took a New Year's oath to qualify for the World Cup, reciting:

"I pledge to advance to the World Cup, which is the professional goal that we strive for... we swear by death to kill along the bloody road of defending the honor of the motherland and realize our youthful dreams."

For Australia, aside from having to play strong teams from Iraq and Qatar, the Socceroos will have to cope with Kunming's high altitude. At roughly 1,900 meters above sea level, Tuodong Stadium poses a major challenge to Australia, which has no high-altitude training facilities of its own.

Australia is now filtering through player files from 2005 to determine which of its players are best- and least-suited to playing at high altitude. Australian media is viewing China's selection of Kunming as a strategic move to disrupt the Australian side.

yeah but where do you buy tickets? :P

None of the articles I found about the game talk about where to buy tix. As the match is more than two-and-a-half months away it may be a while before they go on sale. If anyone learns of where to buy tix/how much they cost, please let us know.

I'm an Aussie living in Sydney and on Wednesday 6 Feb go to Melbourne to support our Socceroos vs Qatar - good luck to China in their away match vs Iraq on the same day. A lot of us are coming to Kunming to see our team play you on 26 March, so expect to see many more Aussies in your beautiful city around that time!

Anyone know how / where to get tickets? ;)

yeah mate, enjoy your trip and kunming and its a beautiful city where i grew up. but i don't think you Aussies will even get a point from that game. well, all the best! Go china

Based on the first round or matches, the China/Australia game should be close. I (a 68-year-old male) will be there supporting Australia. I would like the opportunity to meet up with some opposing supporters and see some of the City.

hello again - I will be in Kunming and want to come support my fellow Aussies... how do you get tickets?!?!?

i was just passing the tuodong stadium, so i dropped in to see what the score was with tickets. people weren't very sure, giving me both March 10 ("but this isn't for certain") and March 20 as the date ticket sales commence. the ticket office is by the main gate on dongfeng dong lu. i think i'll head back in early March and see if matters have clarified.

in other news, i have heard that tickets available to the public will be a rather small percentage of the total, with others available to sponsors, government and such like. however, i don't know the ultimate source of this information, or its veracity.

I am in Chengdu and would like to go the game, so i will not be able to go to the stadium to buy tickets, does anyone know if you can buy them on the internet?

tickets sale will be avilable from 10th March and you will need to provide your ID or Passport details too. Lucy, i'm just being curious. what do you do in kunming?

I have tickets for sale. Please see my classified entry.

All Grade A tickets have been sold out now and Grade B tickets are running out.

If you want tickets, please contact me asap as, after March 10th, I will be unable to procure more tickets. After that you have to try your luck with the ticket office.

you have tickets already to the game? do i have to send the money to Nigeria?

Thank you for your email regarding ticket sales for the China vs.. Australia World Cup qualifier in Kunming on March 26. FFA is trying to ascertain as to how tickets are being sold by the CFA for this match. Despite repeated attempts we have not received any information. Should confirmed ticket details be made available to us we will post these on our website www.footballaustralia.com.au

i was by the stadium again yesterday - the ticket office still has no idea :s

FFA here has no idea also

I am very suprised that FIFA could allow CFA to manage the ticket sales like this. I have purchased plane tickets and booked the hotel but am not sure of getting the tickets. We have called all online event ticket agencies in china and none of them are covering this event. I have been in touch with the ticket office and the only way to reserve tickets seems to be sending cash to a person's bank account and have them purchase. I don't need to say this is high risk.

I can't believe they have been allowed to handle it in this fashion. I have been given the official ticket release date as the 20th but you need to be there in person.

shortly after posting on monday, i heard from a friend about tickets being sold for 190 kuai at gate 7 of the stadium

just to reconfirm what's been said-- tix are available at tuodong stadium at Gate 7. Walk up to the Kunming soccer fan club office on the 2nd floor. 100rmb tix are gone and 190rmb tix are almost gone too. There's still 480rmb, 2008rmb for the 'chairman'-level seats and a few price ranges in b/w that I don't remember. They'll give you a card with your ticket area and you need to head back on the 24th or 25th to pick up the actual ticket. And you need to bring your passport...

The entire match allocation of tickets was sold by the CFA to a private company in Beijing for a sum of around 8 million RMB. That company is now selling tickets through various outlets.

The Yunnan FA have some tickets that they're selling out of Tuodong stadium (Gate 7).

Heard from a friend at the Yunnan FA. Tickets available after 20th March.

Not sure what the local situation is Kunming about purchase and availability of tickets, but would be good to hear from someone who's managed to work it all out.
Here in Sydney, we are trying to sort something out with the Chinese Football Association, and hope to have an allocation confirmed soon. There is still no website to buy tickets.

Does anyone know what time the match starts?

My GAP partner and i will be arriving in Kunming tomorrow from Qingdao, and so far havent been able to get any info on ticket sales for the match. We're very keen on coming and supporting our fellow Aussies so if anyone has any info for us, that'd be greeeaat!

to Eshan, the match starts at 2pm local time

to Amanda, we have secured an allocation of tickets from the CFA and pick them up in Kunming when we arrive on 23rd - they are equivalent to A$65 each (cost price) but we are told there is only one category for Aussie fans - if interested post your email address and I'll send you details
cheers, Pablo (in Sydney)

Hey all...
I work in Yunnan (Kunming's province) and i want to get my translator to make some enquiries for me about tickets. Does anyone have a chinese phone number that i can use?
I just can't believe the Socceroos are bloody playing in Kunming... how can you miss it if you're here??!!

Ben, if you need tickets I have three left from my allocation from Chinese Football Association so its a legitimate source (see previous post above) - leave your email address on here if interested.
We will be staying at King World hotel in Kunming.

im after tickets and will be in Kunming on the 23rd and 2 of us are staying at the Camilla hotel. my email is falkna@yahoo.com

Jason, just sent you an email about tics for you - if you take them that leaves only one left for someone else!

Hey Pablo,
I'm heading across to Kunming and arrive on the 25th with two others. Do you have any other tickets or know how to get any more?? My email address is sticksy_monster@hotmail.com.
By the way, were you in Germany for the world cup - we had a couple of beers in Kaiser with a Pablo...

UPDATE:
Have now run out of tickets from modest allocation (see previous posts above), so others will have to try there luck through the ticket office at Stadium or other agencies.

I have 7 tickets remaining for the match from my allocation.