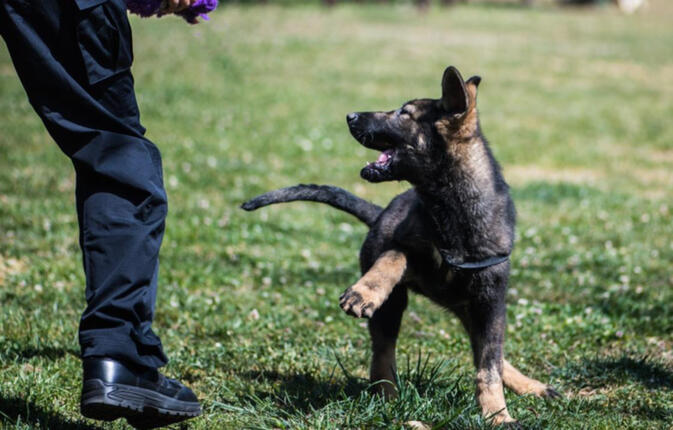 In a biotechnological and law enforcement first in China, scientists in Yunnan have cloned a police dog. The resulting puppy, named Kunxun (昆勋), is now three months old and expected to finish a training course in crime prevention over the next few years. Once put into active service, the dog will become the first of what law enforcement officials in Yunnan, and the rest of China, expect will be many more genetically bred police dogs.

Kunxun was created by a team of geneticists from Yunnan Agricultural University and a private, Beijing-based biotechnology company called Sinogene. The process began by taking skin tissue samples from a seven year-old Kunming wolfdog — a close relative of German shepherds. The research group then created a viable embryo that retains "99.9 percent" of the original dog's DNA, according to numerous Chinese media reports.

The donor is named Huahuangma (化煌马), a decorated member of a canine crime unit in southern Yunnan. She has previously been recognized by the Chinese Ministry of Public Security as a "first-class meritorious police dog" for her work identifying illicit narcotics shipments and aiding in the tracking and arrest of several suspected murderers.

Expectations are high that Kunxun will follow in her DNA original's footsteps. Unlike the gene-edited monkey clones born in a Kunming laboratory five years ago, scientists wanted Kunxun to be an exact copy of the original. The thinking is that by duplicating dogs with proven track records of crime fighting success, clones will be easier and less costly to train.

Kunxun's case is only the beginning, as cloning technology remains extremely cost-prohibitive. However, training a puppy to become a crime fighter takes several years and costs up to 400,000 yuan (US$60,000). Researchers believe cloning will one day save money for Chinese law enforcement bureaus. Sinogene deputy general manager, Zhao Jianping, admitted to reporters that may be some time far in the future, saying, "the cost of cloning remains a bottleneck for mass production".