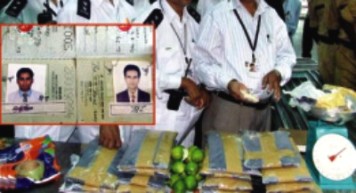 A major shipment of heroin headed for Kunming was discovered in the Bangladeshi capital of Dhaka on Monday, leading the country's customs officials to seek Chinese help in finding the Kunming contact for the smuggling operation, according to Bangladeshi media reports.

Bangladeshi customs at Zia International Airport arrested two Bangladeshi nationals for drug trafficking after finding 23.5 kilograms (51.8 pounds) of heroin hidden in their luggage under lemons, tea and lentils. The bust is the biggest in Bangladesh since 1999, when three Pakistani nationals were arrested with 24 kilograms of heroin.

According to customs officials speaking at a press conference, Ariful Islam Bhuiyan and Mahmud Ali were attempting to smuggle the heroin from Dhaka to Kunming via Beijing. The officials said they suspect that the two men, traveling to China on business visas, are part of an international drug ring, adding that they seek China's help in finding the intended recipient of the shipment in Kunming. As of noon on Wednesday, Chinese news media has yet to cover the story.