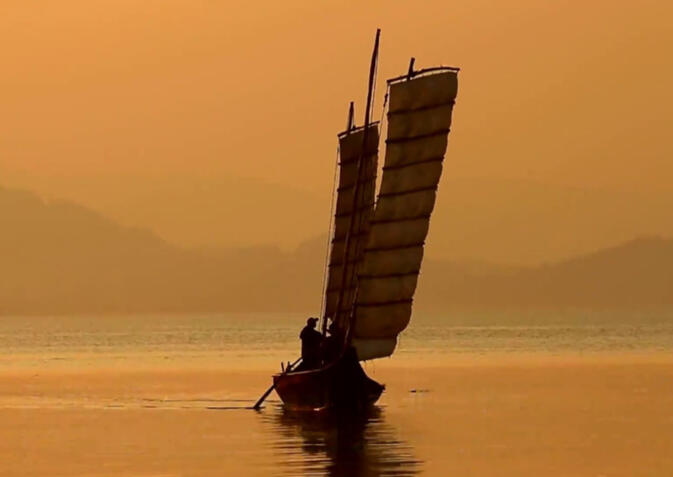 A smiling man struggling to display a huge fish — that was the image splashed across the front page of Kunming's largest daily newspaper on September 25. It is fishing season on Dianchi Lake. Not only is it a time for locals to get in some angling, but also an opportunity for provincial officials to tout their accomplishments concerning the 'rehabilitation' of Yunnan's largest body of water.

Holding up his prized catch on the front page of The Spring City Evening News was recently dubbed the new 'Fish King'. Following a day of commercial fishing, this unidentified man had snared the largest catch of the day — a 20.37 kilogram specimen that appears to come from the carp family.

The Fish King was awarded 1,000 yuan for his accomplishment. At a bustling shoreside market in Jinning (晋宁), the king later sold his champion fish at auction for a whopping 16,800 yuan. The windfall was made possible in part because of large crowds — apparently with deep pockets — drawn to the third annual Dianchi Fishing Season Festival (滇池开渔节).

The festivities began on September 21 and run until October 8. In addition to fishing contests, the event offers hot air balloon rides, a Mid-Autumn Festival banquet and a fish-oriented 'Long Table Feast' modeled on the Hani minority tradition of serving entire villages at single oversized tables that sometimes stretch for a kilometer or more.

But more important than any of the entertainment options is the fact that Dianchi appears to slowly but surely be returning to some semblance of normalcy. For decades, the lake — especially along its shores — has been a fetid mess dyed green by huge blooms of destructive algae.

The unsightly film covering large portions of Dianchi is the direct result of agricultural runoff, industrial tailings and raw sewage all flowing unchecked into the lake. Government efforts to curtail pollution over the past 20 years have been enormous, ranging in scope from building dozens of treatment plants to creating staggeringly costly water diversion projects.

The spending appears to be paying off. So far in 2018, scientists tracking Dianchi's overall water quality have reported one "serious new outbreak of algae", an event which lasted a single day. Compared with previous years, this represents "significant" progress, according to a Xinhua report.

Nevertheless, portions of the lake remain labeled Class IV water, a government-decreed distinction Baidu's online encyclopedia defines as "fit for amusement purposes not involving liquid coming into direct contact with skin". Gone for now are the days when the entirety of Dianchi was considered "unfit even for industrial use". As of this writing, a fleet of 1,500 boats is scouring the depths for fish in a lake that has a long way to go, but appears to have better days ahead.

Editor's note: Thanks to GoKunming user tigertiger for reminding us of fishing season's arrival in the forums.

Good to hear that it's accomplishing something, hope this will continue to improve a wonderful local resource.