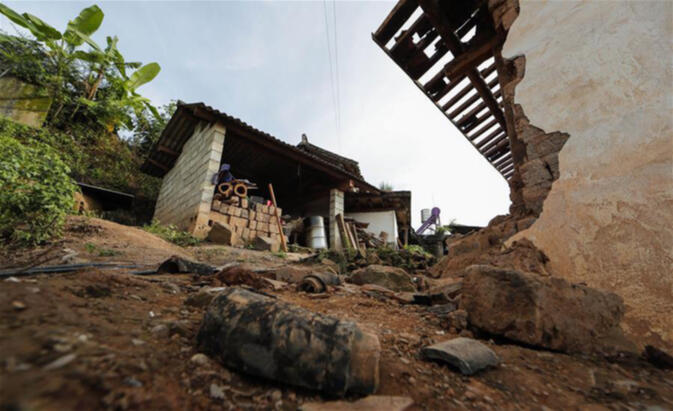 Residents of Mojiang County (墨江县) in southern Yunnan's Pu'er Prefecture continue to dig out and clean up following multiple damaging earthquakes over the weekend. The most intense was a 5.9 magnitude temblor that shook the region on the morning of September 8. Although a few dozen people sustained injuries during the tremors, no one was killed.

The original quake shook products from supermarket shelves, shattered windows and collapsed walls in homes made from mud bricks. Emergency response teams say more than 5,000 people have been relocated as inspectors assess the damage to determine if structures remain inhabitable or need to be reinforced or demolished entirely.

Government relief efforts involving 1,500 specialists and volunteers distributed tents, beds, non-perishable food items and water, concentrating on the towns of Niuku (牛库) and Tongguan (通关), among others. Mojiang is, by Chinese standards at least, a sparsely populated region. The mountainous area is a Hani minority autonomous county where most residents depend on agriculture for their incomes.

Mojiang is also known across China for its annual Twins Festival. Each year for the past 13, tens of thousands of tourists descend on the region at the end of April as roughly 1,000 pairs of twins appear in parades, enormous talent shows and other nationally televised events.

Saturday's earthquake — felt as far away as Yunnan's capital, Kunming, as well as across the border in Laos — was followed by several other sizable tremors. Some of them were nearly as strong as the original. The quakes all occurred at a shallow depth of around 11 kilometers, ripples of the Indian tectonic plate's slow but inexorable collision with the Asian tectonic plate.

Following an earthquake, the Chinese government is typically quick to announce projected economic loss statistics. So far, those numbers have not been made public, perhaps indicating the damage to infrastructure, manufacturing centers and agricultural land was slight. For those homes in Mojiang deemed impossible to save, it would not be surprising if the provincial government began to expand its program of building 'earthquake proof' dwellings pioneered last year in the province's northeast.

Anybody know when the last significant earthquake to hit Kunming was? Are we due one?