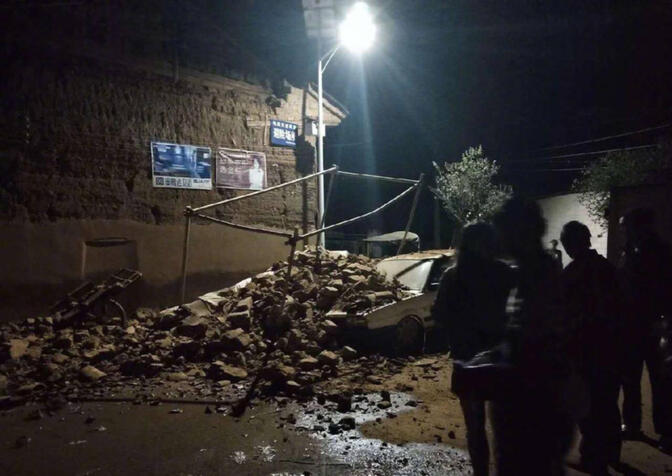 If you live in central Yunnan, you may have been rudely awoken in the early morning hours of Monday, August 13. That's because an earthquake struck east of Yuxi at approximately 1:44am. Authorities report few injuries and no deaths, and are busy assessing peripheral damage to schools and other buildings located near the epicenter.

The United States Geological Survey and the China Earthquake Network both label the quake 5.0 on the Richter Scale. The region directly affected sits in Tonghai County (通海县), on the shores of Qilu Lake (杞麓湖). As of this writing, 18 structures — most of them homes in the town of Sijie (四街镇) — are known to have suffered serious damage.

The nearest large city is Yuxi (玉溪), 25 kilometers northwest of the earthquake epicenter. Although little to no damage was seen in the prefectural level city, the nighttime temblor was definitely felt there. After the tremor hit, microblogging service WeChat filled up with photos of people in both Tonghai County and Yuxi standing outside of apartment blocks in the dark, many of them too wary to go back to bed.

Emergency response crews took five people to local Tonghai hospitals directly after the quake, but none of the injuries were reported to be life-threatening. As day broke, the slow work of cleaning up and assessing the structural integrity of schools, residential complexes, bridges and dams in the affected areas began.

Local authorities issued a "level 3 emergency response", meaning the event was considered small enough not to warrant intervention from the provincial-level government. Nonetheless, the quake was strong enough to be felt 100 kilometers north in Yunnan's capital Kunming, where residents — especially those living on the upper floors of high-rises — felt the quake as they tried to sleep.

Tonghai County has been hit by several aftershocks following the first tremor, although most of them are slight enough not to be felt. For older residents, the experience might have rekindled unwanted memories of 1970, when the same region was leveled by a magnitude 7.8 earthquake that took the lives of more than 15,000 people.

Slept through it, just now learned of it.

We're all relieved to hear your sleep was not disturbed.