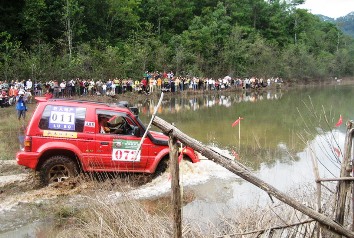 A major component of China's development in the last ten years had been the skyrocketing number of privately owned automobiles throughout the country. There is also growing interest in automobile competitions, most notably the yearly F1 race held in Shanghai. A small, dedicated group of off-road aficionados held a rally last year in the jungles of southern Yunnan which was a trial for this year's China Interational 4x4 Challenge, held earlier this month. GoKunming reader Matt Schiavenza served as a translator at the event and provided us with the following summary of China's first off-road competition.

At first glance, China seems an unlikely choice to host an international off-road competition. Chinese citizens owning their own automobiles - let alone highly specialized four-wheel-drive vehicles - is a rather recent phenomenon. In addition, China's natural landscape has been rapidly depleted in the country's last few decades of development, resulting in a relative paucity of unspoiled countryside. Given these facts, plus the high cost of purchasing and maintaining competition-ready vehicles, one might imagine that pulling off such an event would be difficult.

Yet over the first week of October, the southwest Yunnan city of Jinggu (景谷) hosted the first China International 4x4 Rainforest Challenge, an event featuring more than forty vehicles and drivers from all over China and some foreign countries. Over the course of five days, competitors were required to guide their vehicles over terrain featuring chest-deep water, large boulders, steep hills, and dense foliage. In some cases, the winning car needed five minutes to complete stages less than 300 meters long. Poorly equipped or simply unlucky cars often were unable to finish some stages due to the inhospitable terrain.

Longtime Kunming resident Matti Dubee helped organize the event, and alongside three other foreign residents of Kunming I served as an interpreter for the five marshals brought from the Malaysian Rainforest Challenge to supervise the event. Arriving before the Monday, October 1 start to set up the course, the marshals were asked to turn the Jinggu competition into an event on par with better-established international off-road competitions. They scrutinized the vehicles, trained a group of Jinggu locals to officiate the course and helped resolve the various disputes that inevitably arise during such a competition. 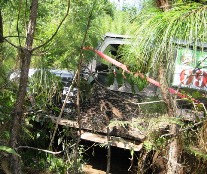 Deep into the forest

Even for the non-mechanically inclined, observing the competition presented a very nice contrast from the usual traffic and tourist clogged National Day travel destinations. For three nights, as the competition moved deeper into the rainforest, we camped beside reservoirs, watching the stars and sipping warm beer sold by a vendor at the campsite. Some of the drivers blasted music from their sound systems. Aside from the familiar sight of men swilling baijiu and playing cards, nothing from the scene resembled a typical holiday in China.

By Friday, the competition had moved back to Jinggu. After the last stage was completed a team consisting of a Hong Kong native driver and a Malaysian co-driver were declared winners. The entire delegation - drivers, marshals, organizers, interpreters and media - were treated by the city of Jinggu to a rousing closing ceremony, complete with local dances from Dai minority villagers dressed in traditional costumes.

The off-road competition certainly had its share of problems, not least being that nearly all of the cars would not have been permitted to compete in a well-established race. Some competitors complained that the course was too easy; others that it was too brutal. But as one of the marshals explained, these kinks can be worked out in the future - the most important thing was giving the sport of off-roading a kick-start in China.

Thanks to Matt for his contribution to GoKunming. If you have a story that you would like to pitch to the GoKunming editorial staff, please send us your ideas or articles via our contact form.

Hi,
My name is Ric Williams I'm the former publisher of Bushdriver Magazine Australia. I'm looking for a Chinese champion 4WD Trial team to join my proposed Jeep team for the 2012 Borneo Safari. Can you supply contacts so I can talk to the right people?
You can reach me on +61430174085 or email: ric.williams2@bigpond.com