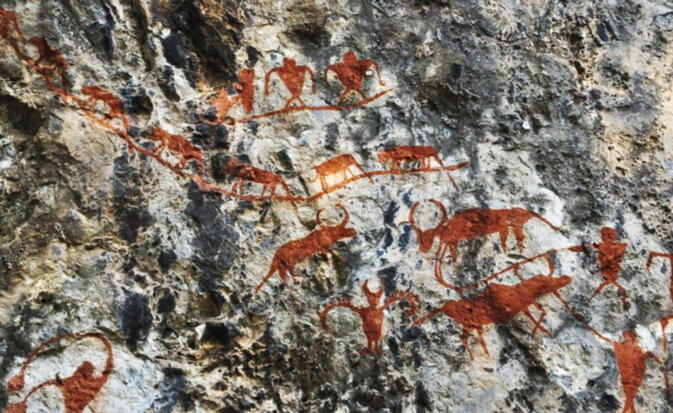 Few have heard of Cangyuan County in Yunnan's Lincang Prefecture. It is a rural place pretty far removed from the typical tourist routes and therefore left largely to its own devices. It is also home to a collection of 3,500 year-old cliff paintings that, up until recently and despite their age, sat mostly unprotected from the elements.

However, Xinhua reports that the provincial government earmarked new funds this month for preservation projects. Seventeen different clusters of paintings dot the crags and escarpments of Cangyuan (沧源). Archeologists recently finished analyzing paint pigments for signs of deterioration and also reviewed moisture levels of the rock faces in an effort to map sections most vulnerable to erosion.

Moves are also being made to shield the rock surfaces from rain and water runoff without damaging the faces upon which they are painted. Yin Yunzhe, a government official overseeing the project, told reporters:

Equipment will be used to monitor temperature, humidity, and sunlight around the [artwork] to avoid the collapse of rocks, as well as [to detect] water and wind erosion. Core parts of the paintings, which have been bothered by rain wash for thousands of years, are expected to be protected from water damage after the drainage work [is complete].

The majority of the 1,063 individual Cangyuan figures were created in vivid red, darker maroon and almost black hues. They depict human activities, including martial scenes, hunting parties and what appear to be farming activities. Animals are also heavily featured, with representations of monkeys, big cats, elephants and cows being the most prevalent.

Little is known about who created the paintings at the dawn of the Bronze Age. But local archeologists attribute the cliff art in Cangyuan to ancestors of the Wa people (佤族), who today live in Yunnan's Lincang and Pu'er prefectures and across the border, mostly in the mountainous regions of Myanmar's Shan State.

Canyyuan County sits in southern Lincang Prefecture on the border with Myanmar. The area where the cliff paintings are situated in tiny Mengnai Township (勐乃乡) is 380 kilometers southwest of the provincial capital, Kunming. At the time of this writing, according to the Xinhua report, only one of the 17 cliff art archeological sites is open to the public.

Like so many prehistoric paintings around the world, those look like really fine ones, as well as being archaeologically important. The Wa culture has been around this area longer than almost any other.

Yes - kilroys have been damaging things like this up for thousands of years. So this project makes plenty of sense.

I went to see these paintings in 2013.
Pretty impressive, and the surrounding region is gorgeous.
There was absolutely no tourism there at all, then.
There was a ticket booth, but there was nobody operating it.
I wonder how things have changed since the opening of Cangyuan Airport last year...

very cool and interesting article. i'm just wondering, where exactly is this mengnai? on a map i've found a menglai (勐来) near cangyuan, is that the same place? i know n and l get mixed up sometimes so was just wondering if one is the local variety of the other, or if its a completely different place. any ideas? thanks and enjoy your weekend :)