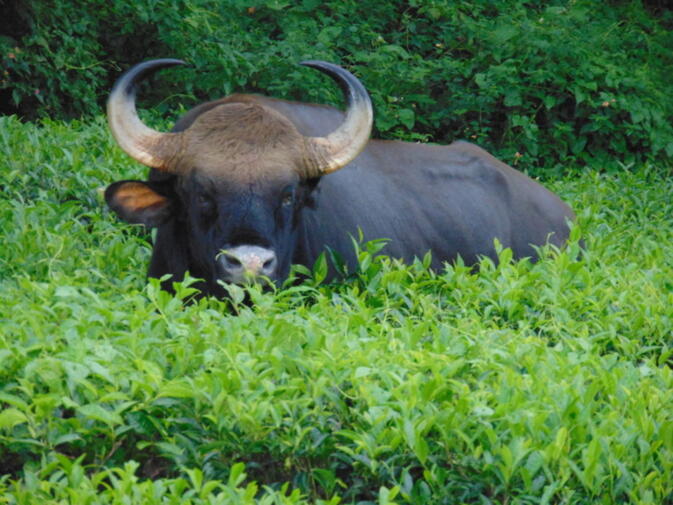 Stock photo of a gaur

The tropical forests of southern Yunnan have suffered mightily over the past 30 years for a variety of reasons. As natural ecosystems in the region shrink, wild animal populations die out or are forced into new areas. But recent conservation efforts are having some positive effect, especially in terms of large animals. One recent example involves gaur, an enormous species of buffalo native to the countries of South and Southeast Asia.

Camera traps placed in the Xishuangbanna National Nature Reserve (XNNR) — which sits about 40 kilometers west of the city of Jinghong (景洪) — captured images of a small herd of ten wild gaur in May. The find has left researchers working in the prefecture cautiously optimistic that once-decimated buffalo populations in Yunnan may be making a comeback.

In the 1980s and 90s, as huge swathes of Xishuangbanna were converted from native forest to banana and rubber plantations, already thin gaur populations plummeted further. The last census focused on the animals — called yindu yeniu (印度野牛) in Chinese — was conducted in the mid-1980s. 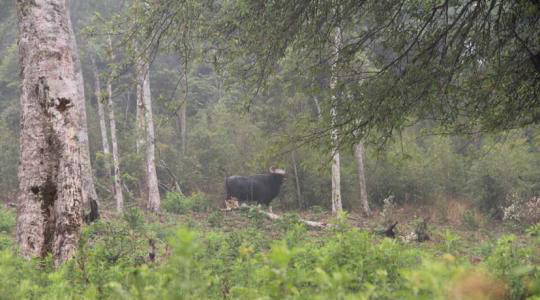 Camera trap photo of a gaur taken in Xishuangbanna May 19

At that time, animal biologists estimated gaur populations in the region had dropped from roughly 650 individuals to fewer than 160. The national government then placed the animals under 'Class-I' protection, the highest conservation status given to wild animals in China. However, until only the past few years, little was done to quantitatively measure whether the animals were actually being saved.

Three years ago, forestry management authorities in Xishuangbanna began a program where one-time farmland bordering forested areas is allowed to regenerate naturally. Plant species variation has since rebounded in some places, allowing wild animals greater opportunities to find forage, as well as larger areas across which they can range.

Gaur are massive creatures and by some estimates eat a larger variety of plants than any of their smaller bovine cousins. Males can grow to more than two meters tall at the shoulder and weigh more than 1,500 kilograms. Due to their massive size, they require enormous amounts of food. Because of these characteristics, deforestation and a subsequent loss of food is a major threat to their survival.

In Yunnan, poaching is also a serious problem. As news of the camera trap photos circulated online, related articles reported that in 2017 alone, forestry police working in XNNR prosecuted 23 criminal cases involving the confiscation of 59 firearms. However, no cumulative statistics are available regarding the prevalence of poaching in the protected natural areas of southern Yunnan.

Unfortunately, in Sub-Saharan Africa such as DR Congo where these great apes are harbored also faces alarming rates of deforestation... among the highest in the world in fact.

Anti-deforestation policies similar to that of Brazil in recent years must be implemented in Yunnan and elsewhere to save our world's tropical forests & many species that reside in them.