This weekend around Kunming

This weekend around Kunming there will be flurry of events catering to a variety of tastes - contemporary dance, classical music, yoga, girl rock and pub crawling plus the beginning of monthly no-car days will be some of the highlights of the next 48 hours.

Beginning this afternoon, Yuansheng Studio in the Loft/Chuangku art compound will be hosting the Crossing Festival, an annual independent festival promoting the development of China's independent contemporary dance and theater, documentary film and experimental video.

Founded by Caochangdi Workstation (草场地工作站) in Beijing in 2005 and co-organized by Borneoco/CultureXpress in the Netherlands, this is the first time for the Crossing Festival to come to Kunming - the only other stops are in Beijing and Shanghai. Two dance performances presented by Chinese choreographers nunu and Eagle Ho will be accompanied by dance films brought by Janine Dijkmeijer, director of the Dutch international dance film festival CineDans.

Kunming is the first city in China to adopt monthly no-car days in which private vehicles are not allowed into the city center. Saturday is the first of the city's monthly no-car days, with only buses, taxis, government vehicles and private vehicles with 17 seats or more and a minimum of 50% occupancy allowed within Huancheng Dong Lu, Huancheng Nan Lu, Xichang Lu and Yieryi Dajie. The downtown car ban starts at 9 am and lasts until 7 pm. 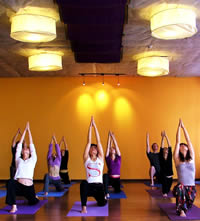 Yutao Yoga, Kunming's oldest yoga studio, will be celebrating its fifth birthday Saturday afternoon with events including a retrospective exhibit on the studio's growth, a yoga performance, afternoon tea and a lucky draw. Festivities begin at 2:30 and end at 6:00. Yutao Yoga is located on the fourth floor of the Tianhao Building at Qingnian Lu and Renmin Zhong Lu.

Starting just after the end of the no-car day at 8:00 Saturday night will be the second Wenlin Jie area Halloween pub crawl. Beginning at the Yunda Sunshine Cafe just outside of the Yunnan University north gate on Yieryi Dajie, the roaming costume party will visit several bars before finishing at Chapter One. All costume-wearing partygoers will receive discounts on beers at each stop and there will be Halloween-themed drinking games.

Following on the heels of last weekend's packed jazz concert, TCG Nordica will host a classical violin concert featuring Li Qi on Saturday night. Admission to the 8:00 show is 40 yuan.

Two local girl bands will play a free show Saturday night at 9:30 at Shelter Bar (防空洞酒吧). One of the bands - No Answer (打死你也不说) - will be playing next month's Kunming Outdoor Music Festival and will be joined at Shelter by Medusa (美杜莎). After the show, DJ Shuangma and DJ Chengcheng will take the stage.

A salsa Halloween - brought to you by Keats