Around Town: Finding solitude in the middle of the city 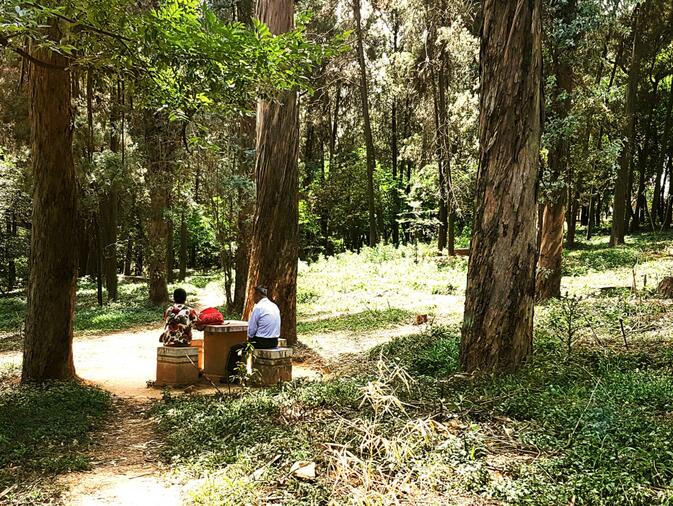 An article published recently by Yunnan Net claims that the Spring City has 10.2 square meters of 'public green space' for every single one of its inhabitants. Is this a lot or a little? The number seemed small. I tried to imagine several million people all occupying their own bedroom-sized patches of grass, failing miserably.

But as someone who has made a point of regularly seeking out Kunming's quiet and less-visited places, I have been pleasantly surprised over the years how easy it can be to find little spots of relative solitude amidst all the honking cars and busyness of modern day Kunming. 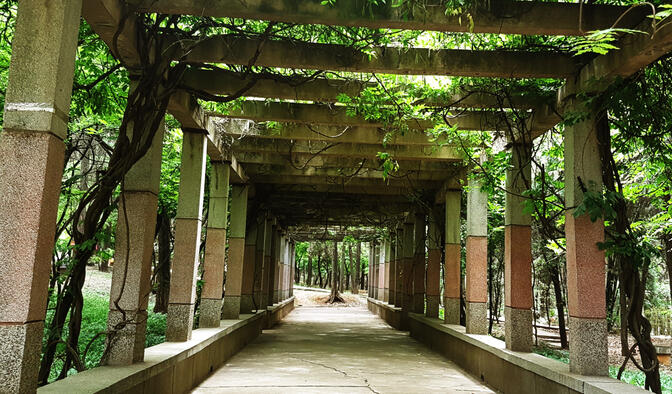 Aside from parks, temples and the older university campuses offering some respite, Changchong Mountain (长虫山) also has its fair share of biking and hiking trails, not to mention a fabulous nunnery with commanding views of the city. For those with a bit more time, heading out north of town to places such as Fumin (富民) can be wonderfully rewarding in this respect. But inside Kunming's second or third ring roads? That is a bit of a tricky proposition.

The first step is limiting one's expectations, at least to a degree. When I first stumbled upon Heye Shan (荷葉山) at the beginning of 2017, for example, I was blown away by my little discovery. By any stretch it is a modest little hill with a few trails and, of course, a brightly painted temple. But at the time I was so starved for greenery that the area — really just hidden in plain sight — was a welcome shock to my system. 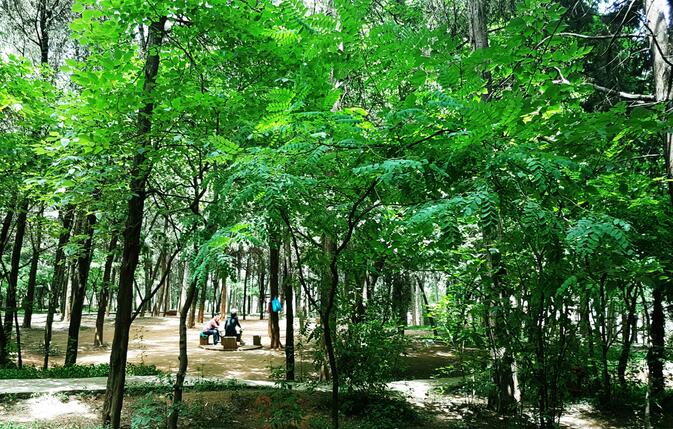 It was with that in mind that I began asking around for other hidden little gems after reading the per capita green space article. There were some leads, but the one I found most intriguing was supposedly near the center of town on Jianshe Lu (建设路), a place I must have passed by obliviously on bike and foot and bus too many times to count.

The little park is indeed located inside the Science and Technology University's Lotus Campus Park (理工大学莲花校区) at the top of the Jianshe Lu hill. I asked the guard at the gate what I should expect and he explained it was mostly housing for graduate and post-graduates working at the university. He kindly ushered me past a security gate to have a look, not batting an eye when my panting dog followed suit. 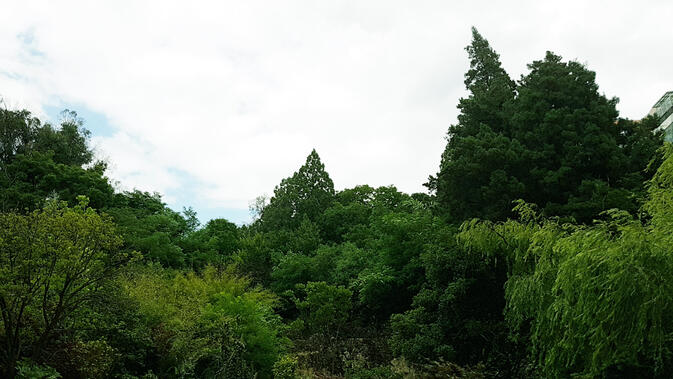 Directly inside the entrance is a large rock garden festooned with all sorts of plants, most of them running wild and growing in every direction. The rocks must have at one point been part of an ambitious water feature, but by the looks of things, the spigot had long ago been turned off. Water still sat in little channels connected to one central pond, but was having trouble maintaining any current of its own.

To one side of the entryway a small road heads south?. It was packed with parked cars, so I turned the other way and followed a pedestrian path north. It became quiet pretty quickly, although a good number of birds could be heard singing away somewhere nearby. Trees, most of them eucalyptus or pine, loomed up straight and tall beside the path. The paved part of the trail looped gently around the park periphery and, instead of following it, I headed up into the trees. 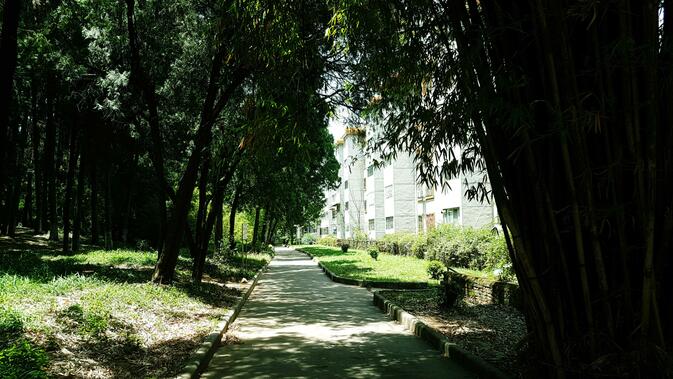 Little dirt trails crisscross one another throughout the area. One led to a dangerous looking jungle gym, while others snaked their way towards old stone benches and tables. From first glance, the park was simple and relaxed. Their were other people around, but most of them seemed to be enjoying the quiet. They spoke in hushed tones while sipping tea or noiselessly moved coin-shaped wooden pieces across Chinese chess boards.

Randomly following different paths, I snaked a criss-crossing route around the area's central hill, now higher, now lower. It was one of those incredibly bright Kunming days where too much time in the sun starts to feel like the inside of an oven. But shade wasn't hard to find. In addition to the general calm, lack of traffic noise and small number of people, the temperature under the spreading eaves of the trees was simply perfect. 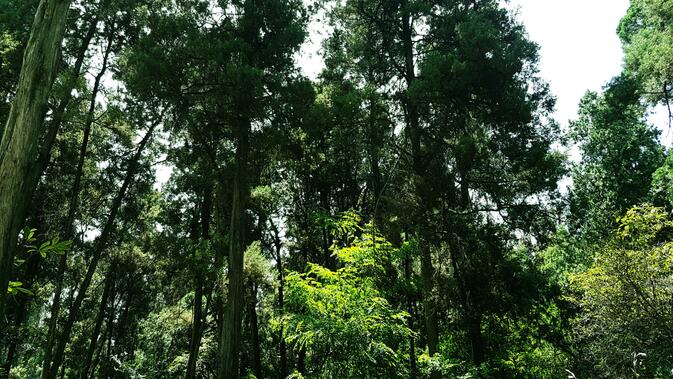 This little outpost of calm is admittedly not particularly large. The driveway and path that diverge from the main entrance form a ring around the park, one that can be traversed in fewer than ten minutes. But the lack of city din, blocked out entirely by the residences encircling the area is undeniably alluring, as are the old trees and general lack of people.

Plus, the park is slightly overgrown and unkempt but someone obviously takes care of the trash. Random features — a tumbledown arched walkway wrapped with vines here and a walled off water tower rising higher than any of the nearby trees there — add to the overall charm. I'll be back soon with a book, dog in tow. 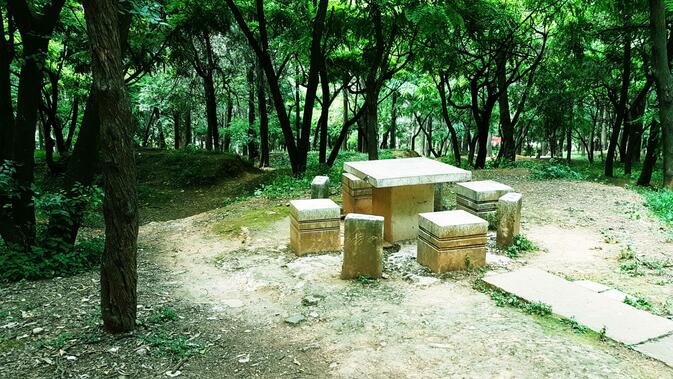 Ladies and gentlemen... cast your votes!

Nice little spot. I've stumbled across a few of these xiaoqu parks, and they do seem to be some kind of uni or pension housing. The pleasure of going from city concrete noise to a peaceful little park is always pure joy.

10m of green space per might be a lot as the total implies at least 70,000,000 sqm of park space. They'd have to included chenggong area parks to hit that number.

if you dont mind the rain and carry an umrella, there is lots of peace to be found right now

Thank you for this post. Early mornings just before break of dawn will always reap quiet solitude in any city. For said morning birds, get the Kunming Zoo (Yuantong Hill) annual pass for just a little over 100RMB, and enjoy peaceful morning walks or jogging (w/ changing elevations) before 7am.