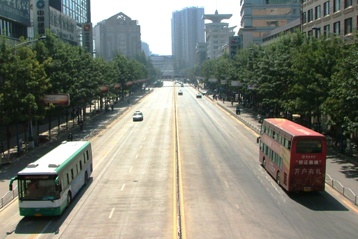 This past Saturday Kunming held its first-ever 'No-car day' in which private cars were not allowed in the city center. The event was the climax of Kunming's 'Urban Public Transport Week', promoting the city's bus system and other alternatives to driving private automobiles to get around town.

With only buses, taxis and bicycles on the road, major thoroughfares including Renmin Lu, Beijing Lu and Dongfeng Lu were surprisingly uncongested. From 7:00 am to 7:00 pm, the air within Kunming's ring road noticeably lacked the smell of exhaust that the city's streets typically carry.

Police, city employees and volunteers were strategically placed on Huancheng Bei Lu, Huancheng Dong Lu, Huancheng Nan Lu, Xichang Lu and Yieryi Da Jie and were successful at keeping the majority of private cars outside of the city center. There were drivers who refused to accept the downtown ban and attempted to enter the area, most of whom were stopped by police and fined. 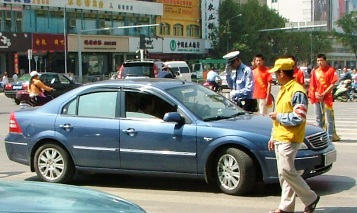 Public reaction to the 12-hour ban on private cars downtown was mixed. Not surprisingly, people who don't own cars tended to view the experiment positively while car owners typically found it inconvenient.

"I understand the motivation behind it [the downtown car ban], but it created a lot of difficulty for many people," 35-year-old car owner Wang Kun said. "I hope this happens once a year at most."

The Kunming government estimated that the ban affected 200,000 private automobiles, or one-fourth of the city's total number of registered motorized vehicles.