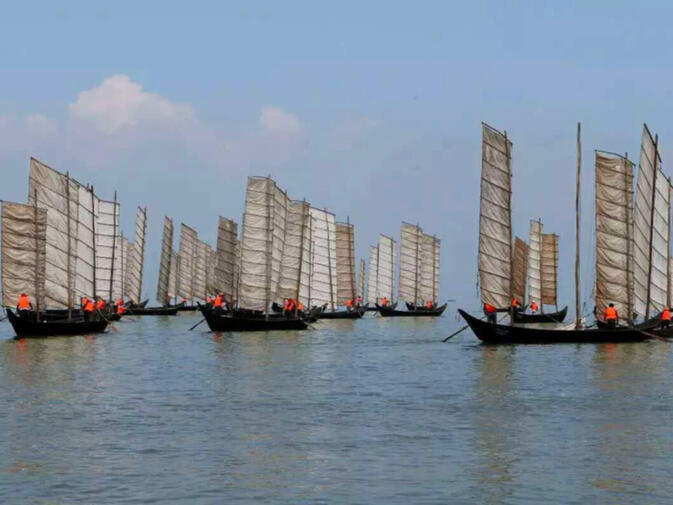 On October 23, after a nearly six weeks of permitted activity, commercial fishing on Yunnan's largest lake came to a close. The government-sanctioned fishing season is a small but important indicator that after years of struggling to repair rampant ecological damage, efforts to "rehabilitate" Dianchi Lake may finally be bearing fruit.

Both angling and netting were allowed over two periods, the first of which spanned September 13-24, while the second, longer interval stretched from September 29 through October 23. Nearly 1,300 boats were granted fishing licenses issued by the Dianchi Management Bureau (滇池管理局), and the vast majority of the vessels sailed from wharves in Jinning (晋宁) at the southern end of the lake.

Allowing commercial fisherman to return once again to the lake proved to be a short but welcome boon for families who once, only a generation ago, depended on Dianchi to make a living. The average boat owner reportedly earned 10,000 yuan (US$1,475) over the recent six-week fishing period, while top earners netted upwards of 80,000 yuan. On the downside, 78 people had their tackle confiscated and were fined between 1,000 and 2,000 yuan for fishing without licenses.

The combined catch totaled 4,090 tons, with more than three-quarters comprised of different species of carp. Freshwater shrimp and baitfish made up the rest of the haul. Although seemingly large, the amount of fish pulled from the waters of Dianchi was only one-third of what authorities would have allowed.

Over the past several years, short fishing seasons have been allowed in spurts by the Dianchi Management Bureau, as administrators and scientists attempt to ascertain the lake's health. Dianchi has suffered for years from a giant blue-green algae bloom resulting from decades of unregulated wastewater disposal and agricultural runoff. However, the lake is thought to be gradually growing cleaner, healthier and more conducive to life.

The turnaround, slow as it may be, is the product of dozens of government policy changes coupled with enormous outlays of money. The largest such project involves siphoning enormous amounts of water from the Yangtze River annually and pumping it 350 kilometers southeast into Dianchi. While the results of this ambitious endeavor have been encouraging, fish stocks in the lake are rising due to a separate but related strategy.

Since 2013, the Dianchi Management Bureau has released some 3,500 tons of juvenile carp into the lake. In order to gain one kilogram of weight, each fish must reportedly consume 1,000 kilograms of algae, thus contributing mightily to reduced levels of the single-celled scourge. An added benefit of the rapidly growing carp populations is the return of fishing to the lake, although questions as to levels of heavy metals and other toxins in the fish remains unremarked upon in the press.

Nonetheless, officials appear happy with the overall progress, at least enough to suggest next year's fishing season will be longer and more profitable than the one just finished. According to a just-issued report by newspaper Difang, Dianchi lake water is cleaner than it has been at any point since the mid-1990s. Fish stocks are reportedly growing, wetland health is improving and long-absent bird species are returning.

The wetland management has included diverting water from one of the small rivers, and running it through a wetland. The wetland is not longer just a fetid black swamp, and there are many more egrets there this year.

Wow, I thought this was a picture of the fake boats in northern Dianchi (shallow part, between Xishan and Daguanlou Gongyuan) but in fact apparently someone manufactured a bunch of these little square-riggers for the south of the lake (晋宁县沙堤村码头), and they are actually in use! I would be super keen to go check them out. Probably it's a good season, since fishing is over, it's still warm before the winter, the boats are idle, so we should be able to have a sail. I've never sailed a square-rigger, they are apparently very difficult to turn. See Wikipedia for background: en.wikipedia.org/wiki/Square_rig

Anyone know the situation at Erhai? I never see boats on it apart from the tour boats of a company that seems to have a monopoly. Old pictures show lots of fishing boats like the ones pictured above.

As far as I can tell, Erhai is getting worse...at least the shoreline, mostly due to tourists throwing garbage into the lake, and lakefront hotels dumping in untreated sewage. I'm super depressed about the environmental situation in Dali, especially the air quality.

Three of us are going down to try to get a sail on Sunday, one more space in the car, PM if interested!

Agree. Air is terrible especially in Xiaguan. The traffic is out of control. I'm sure you're right about the lakeside hotels. Was wondering why the government, having allowed all that to happen, seems to have banned all boats except the tourist company's.

We delayed a week due to bad weather and went down last weekend, though it took us all day to get there.

We found the village named in the linked Chinese article - Shati (沙提) - and indeed there are lots of boats there, but they are all made of metal, not of wood. Currently because it is the end of the season they are all hauled up on land being re-coated. There is quite a lot of pollution as the village burns off its rubbish right next to the lake... even though they fish from it. Some government garbage collection effort is necessary!

Anyway, it should be possible to get a half-day on one of the boats when the season re-opens, according to the locals it runs from about April/May through October.

Nearby villages also have boats, it's not exclusively that one place, but that's where a fairly large fleet of fishing boats is based (upwards of 25 of them).

The easiest way to get there is to get a bus from near Haigeng Gongyuan in the Dianchi Road area of southwest Kunming for 4元. The bus simply goes straight down Huanhu Lu (环湖路), and the very last stop is close to Shati, either you can walk there down the main road (about 15 min) or you can get a cab or local bus from there.

Unfortunately, much of the nearby area to the northeast along the coast has been destroyed and is completely overdeveloped with stupid empty 'resorts', golf courses and ridiculous housing developments. There is an exception though. We also found a natural area a little beforehand, where the severe cliff topography has prevented over-development and there are still some beautiful little villages with some lovely old traditional houses still standing. The locals said that in March or April, when the water is lower, it is possible to walk across the lake and around the cliff. Could be a nice trip!