Sacred forests of the Dai people: Last refuges of biodiversity 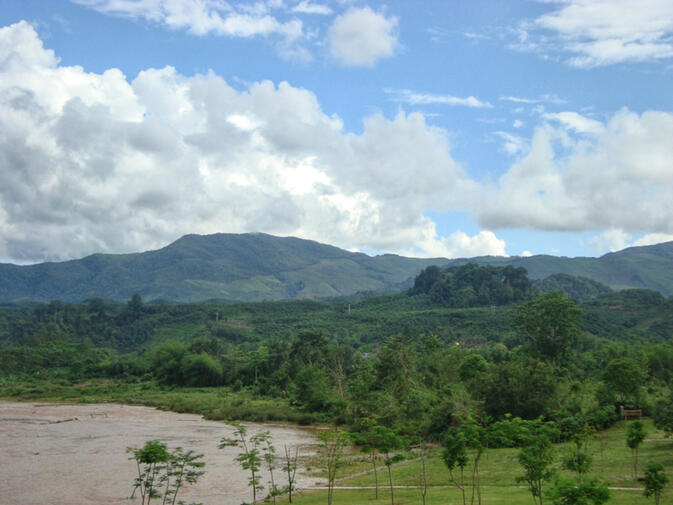 Following the economic reforms of the 1990s and the implementation of new policies allowing for the creation of individual property rights on forestland, the rolling hills of the Dai autonomous prefecture of Xishuangbanna have been transformed into rubber plantations. The carefully planted rows of Hevea brasiliensis have lifted tens of thousands out of poverty, but have also created problems for the people of Xishuangbanna — economic dependency on a single cash crop whose price is fixed by the international market, depletion of ground water supplies and loss of biodiversity.

In eastern Xishuangbanna, below 900 meters elevation — the highest altitude limit for planting rubber trees — the only remnants of primitive forests are state-owned natural reserves and sacred forests. The religion of the Dai people is a blend of Buddhism and polytheism. At the base of Dai polytheism, which pre-dates the introduction of Buddhism to Xishuangbanna, lies the belief in ancestral spirits, or devata, who dwell in forest tracts allocated to them. 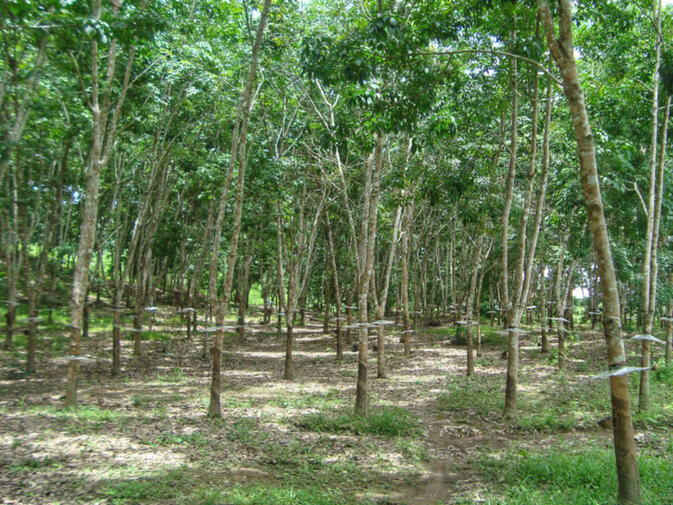 Dai sacred forests, also called 'holy hills', are sacred grounds where it is forbidden to log trees, to pick non-timber forest products and, in some cases, to trespass. Dai people believe that transgression of these rules would anger devata and cause the death of the offender. Through the performance of yearly rituals, devata have the power to protect a given territory from natural catastrophes. They can thus be both malevolent and benevolent spirits. Over the centuries, this belief has contributed to the creation of sacred forests, which, in the long run, have contributed to the conservation of biodiversity.

The Dai sacred forests are complex spaces having social, religious and protective functions. Until the 1950s, Xishuangbanna was a Dai polity on the margins of the Chinese empire, and the Burmese and Thai Kingdoms. Like much of the highlands of continental Southeast Asia, Xishuangbanna was in 'Zomia', and thus beyond the direct control of major empires. The region was a semi-independent kingdom ruled by a king, or zhaopianling (诏片领). 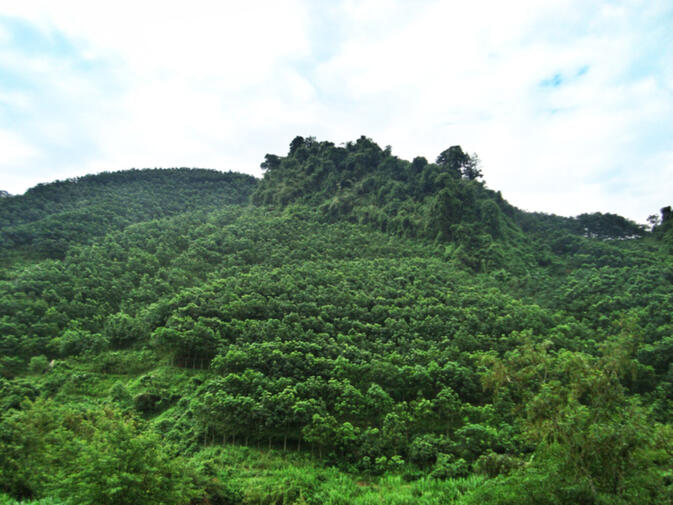 From the capital of Jinghong, the king paid tribute to Burma, Siam and China. From the thirteenth century, after the Mongols were able to anchor Yunnan into the Chinese empire, the native chieftainship system (土司制度) was implemented. The premise of this system was that 'barbarians ruled over barbarians' (以夷制夷) and it was implemented in the ethnically dominated southwest. From a Chinese point of view, Xishuangbanna was indirectly under control of the empire. In fact, the Dai rulers were focusing on their internal affairs.

The territory of Xishuangbanna was divided into areas called meng ( 勐), and further, into villages called ban (曼). Meng were ruled by kin of the zhaopianling, called zhaomeng (诏勐), and villages by a village head. According to Dai beliefs, the deceased rulers — whether it was the king, the zhaomeng, or a village head — upon their death became a devata, who then dwelt in the forests allocated to them. To this hierarchy of territorial administrative divisions and rulers — the zhaopianling, the zhaomeng, and the village head — corresponds a hierarchy of holy hills. There was a sacred forest that was the dwelling place of the zhaopianling, which protected the entire territory of Xishuangbanna. Each meng also had a sacred forest that was home to the spirit of the zhaomeng. The same applied to the territory of the village. 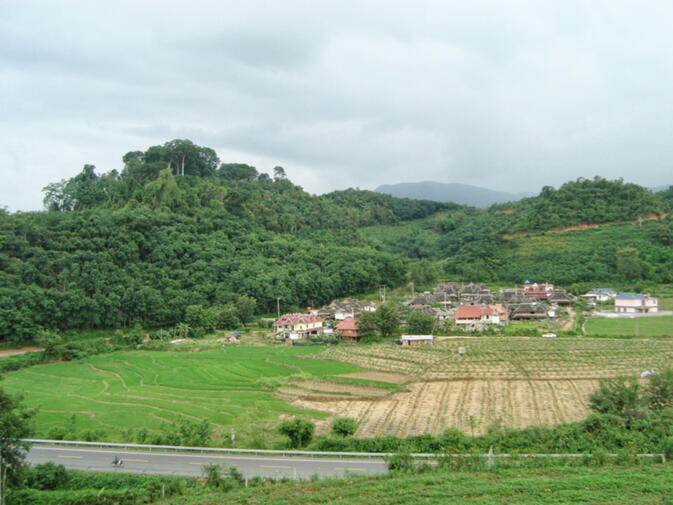 A sacred forest stands above a Dai minority village in Xishuangbanna

Each year, the community had to perform rituals that consecrated the sacred forests and honored the devata. The performing of rituals required the sealing off of the territory, which meant people who did not live there had to leave, and nobody was allowed in. During these rituals, the entire community offered sacrifices and asked the devata for protection.

If the rituals were not performed yearly, the devata would withdraw its protection and plague the community with natural catastrophes. Floods would ruin harvest, epidemics would decimate buffalo herds and fire would destroy villages. In addition to protecting the territory, the rituals also legitimized Dai feudal rule and reminded every one of their places into a highly structured society. This was true whether people were nobles, farmers or slaves. In this sense, Dai sacred forests reified political power. 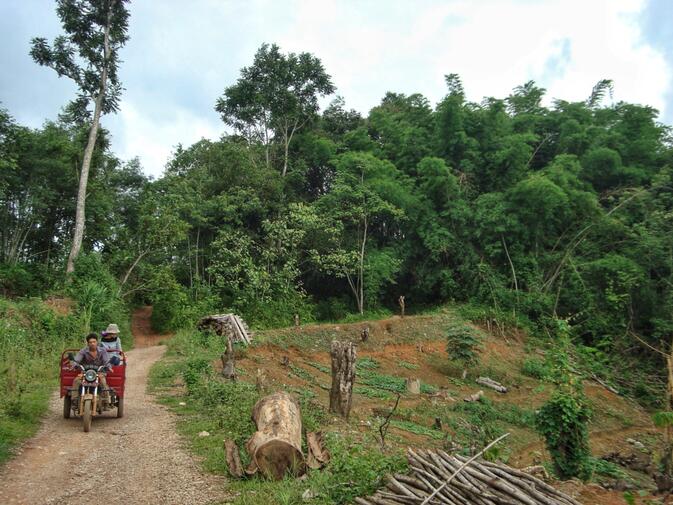 Following the Chinese Revolution in 1949, Xishuangbanna was 'liberated' and the Dai ruling elite abolished. Members of the Dai nobility were killed, forced to start a new life as a peasant or fled to Thailand. In the 1960s, with the advent of the Cultural Revolution, religion was prohibited. Rituals stopped and the Dai sacred forests were burnt either totally or partially.

During the economic reforms of the 1980s, new state policies for property rights and land use were implemented, and ethnic minority people were allowed to plant rubber on forestland. Between the 1950s and the 1980s, ethnic minorities were seen as "backward" and only Han people employed in state-owned farms were allowed to plant rubber. The economic reforms also brought religious freedom. Villages that had lost their holy hill reforested a plot of land and re-created a sacred forest for the devata.

The knowledge of the rituals linked to the holy hills passed on. They were of course re-worked to the new reality, and are still performed every year to ask the devata for protection. They are not as grandiose as they used to be, but the territory of the village is still sealed off during the length of the ritual, during which the community ask the devata to protect rubber trees against winter frost and also pray for higher yields. 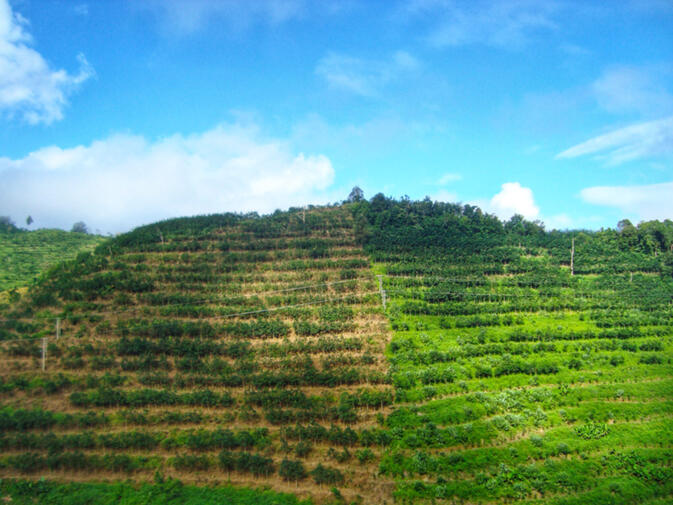 Dai holy hills are complex spaces that are not fixed in time and that can be re-created. Their meanings and functions vary. It just depends on who looks at them. For Dai villagers, the prime function of their respective forests is to protect the community. To others, the holy hills are essential forest fragments, reservoirs of biodiversity in the middle of rubber plantations. More stakeholders may turn to the Dai sacred forest model for clues on how to counterbalance the negative impacts and potential catastrophic consequence rubber is having in Xishuangbanna.

This article was written by Gaetan Reuse, from research gathered in Xishuangbanna over a six-month period while he prepared to write his PhD thesis. Reuse is also owner of Travel Cathay, which specializes in organizing alternative travel itineraries across Yunnan and southwest China. 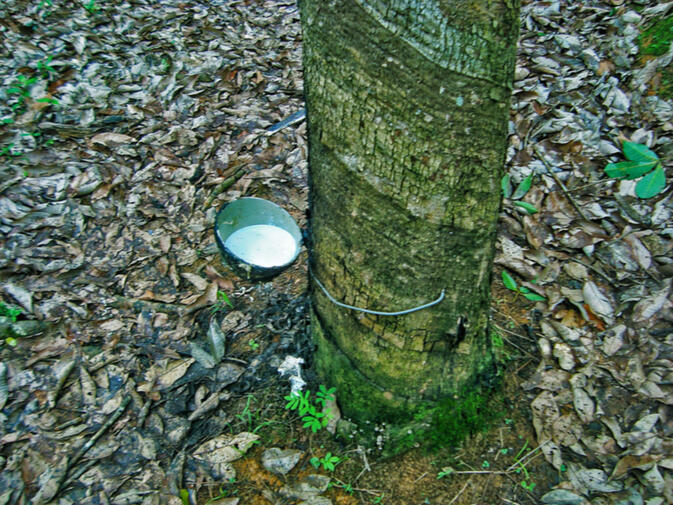 More on sacred forests (this time in Tibetan areas of northwest Yunnan) here.

Interesting stuff. Thanks for the article.

One of my friends was a monk whose father was a traditional Dai shaman or expert at medicinal use of forest products. A very positive thing that the national government did was allocate funds to the preservation of ethnic plant knowledge, and to publish this in a trilingual Chinese-Dai-English tome. Anyone who is interested in local forest biology or the traditional Dai medicinal system (which, similar to the Chinese system is based upon elements and a central notion of restoring healthy balance/equilibrium) would do well to track it down. I believe in their system there is one more, or one less element than the Chinese. I bought my copy at the research institution on Minhang Lu, now possibly moved or closed, but the Dai hospital on the same street should be able to offer advice on obtaining a copy.

Within less than 20 years what was once a beautiful valley of Dai villages, the last gem on the Mekong before it left the country, has become a pathetic icon to utter local government corruption, Han influence and planning failure: a monument to failed policy on one of China's most visible borders. Where less than a generation ago forests stood, out-of-province conglomerates build fake Buddhist features with profit at their heart, and rubber trees have become so dominant that real forest no longer be seen from anywhere in the city, which has become a forest of skyscrapers and neon comparable to Shanghai's Pudong. Where even ten years ago rice fields, tropical plants and nature stood, we find cookie-cutter paved 'parks' in the Han style, extending an dating and ever-ignorant vision of socialist utopia in a voracious zombie-like quest for genericism that is powered by the steady supply of disenfranchised emigres of inner China. I am told that Menghai, once a vast plateau of rice fields and villages, has pretty much developed in the same way, though it was first spared the worst excesses as the Shan State border at Daluo exported most local vice.

Yes, there is still charm left in the area, particularly outside of the cities, and it is certainly worth visiting and seeing for yourself. The smaller villages still offer insight in to traditional language, culture and living practices, there is still great scenery if you are willing to invest the time, and exploring the relationship between the various ethnic groups can be interesting. But for those of us who have watched the changes it is very difficult not to be saddened. On my first trip in 2002, I was amazed to see a musk deer quietly stroll across the forested road. That forest is gone.

Some interesting places still worth visiting are the new prefectural museum in the east of Jinghong, the Jinuoshan Museum on the road to Menghai, Menglun's tropical botanical gardens and - if you have time to head west - the Menglian Tusi Museum showing the life and trappings of a local ruler. Finally, if you head south toward Menglong (through fields of plastic) then you may be able to spot a sneakily established Ashoka pillar harking southwest to India in what I like to interpret as a quiet and peaceful act of cultural defiance. :)

Good article and good comment, Voltaire.
A good book on the subject, though a bit dated (published 2001) is Yin Shaoting's

...like I was saying, his book People and Forests - Yunnan Swidden Agriculture in Human-=Ecological Perspective, published 2001 by Yunnan Education Publishing House, available at Mandarin Books. In English - translated by Magnus Fiskesjo, whose dissertation on the Wa is also very interesting and informative.

Third try right: ok, actually Yi's book is mostly about the people in the hills rather than the Dai, but the whole situation in Banna involves a lot of practices that were ecologically sensible until modern times, and the issue of the rubber plantations is dealt with.