Getting Away: Winter hiking on Yunnan's Laojun Mountain 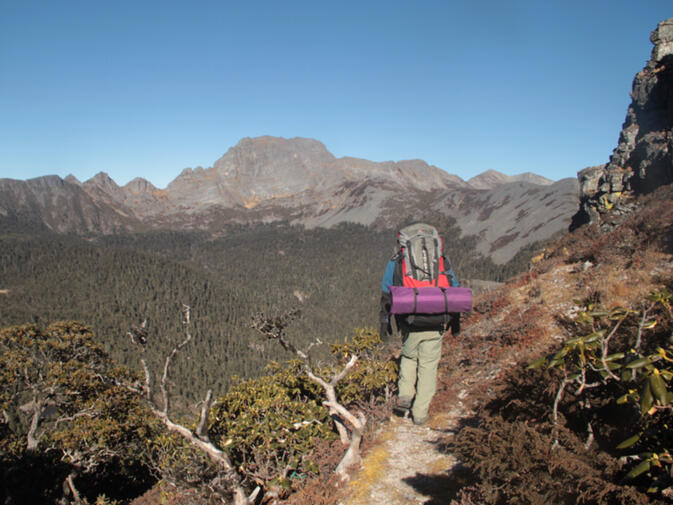 In late December, Yuvi — an outdoor guide based in Dali — two other friends and I, took advantage of the atypically moderate weather to complete a hike in the Laojun Mountains that I had attempted several years earlier. The goal was to complete the 'link-up' between the 99 Dragon Ponds (九十九龙潭) with Liming (黎明), a scenic area famous for its sandstone rock formations. Our route would take us through the heart of Laojunshan National Park (老君山国家公园), a protected area for the endangered Yunnan snub-nosed monkey.

We set out from Dali (大理古城) in the morning, parked at Shigu (石鼓镇), and hired a mianbaoche to take us the rest of the way to the trailhead. While waiting for our driver, I ordered a bowl of 'local coffee' from a local street vendor, which turned out to be a soupy black paste that was apparently brewed from black beans and smelled like rancid tofu. It's not recommended.

Our driver was an outgoing Lisu man, fluent in several of the area's ethnic languages, and with a great knowledge of the area's cultures. As we left the paved road and traveled deeper into the mountains, talk turned to the obvious deforestation taking place around us and the massive piles of firewood stacked in front of villagers' homes. Our driver bristled at our criticisms and, visibly agitated, suggested that we try trading place with these villagers and see how we fared. Point taken. After about an hour, we arrived in the 'town' of Liju (丽菊), a nondescript cluster of houses that offered no indication that it would be the starting point for our hike. Upon exiting the car, Yuvi's first step was to empty the plastic bottle of 'spring water' he had had purchased in Shigu and replace it with water from a small stream flowing down the mountain. 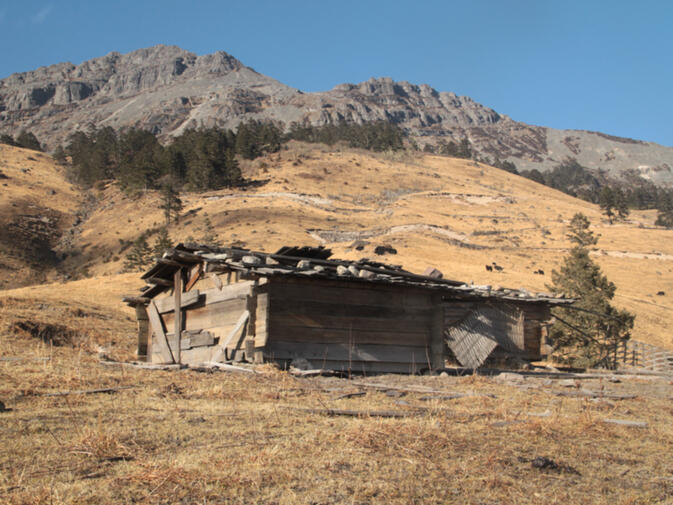 Before departing, I had done some reconnaissance using Google Earth and downloaded some GPS information, so I had a general idea as to which direction we should go. We began plodding up a small tractor track into the mountains, and soon arrived at a small wooden shack. We stopped for a few minutes to make conversation with the old man who lived there by himself, sans electricity and plumbing. He was the last person we would see for the next three days.

After a brief lunch, we continued upward, anxious to reach a suitable campsite before dark. The trail was fairly well-trodden and easy to follow, but also quite steep. It followed a stream up through some pine forest before breaking up onto a nearby ridge. In the late afternoon, we arrived at the first of several large pastures, which had been cleared for animals to graze. It was a bit disconcerting how empty it was — there wasn't a single animal or person in sight and the cabins had evidently been abandoned for the winter. At the very least, we would need to find a potable water source, and yet there wasn't a single logger or forager or hunter or herder or farmer that we could ask to point us towards the inevitable spring that typically would supply them with drinking water.

As the sun set, we began to get nervous, but had no choice but to plod along an unpaved road that probably led to a shuttered quarry high in the mountains. Rounding a bend, we came upon a few streaks of snow decided to make camp there, as it seemed to be our only chance of having access to water that night. We pitched our tents near 4,000 meters of elevation, under a nearly full moon and a cloudless night filled with stars. After a pot of curry, we settled in for a night of fitful sleep. 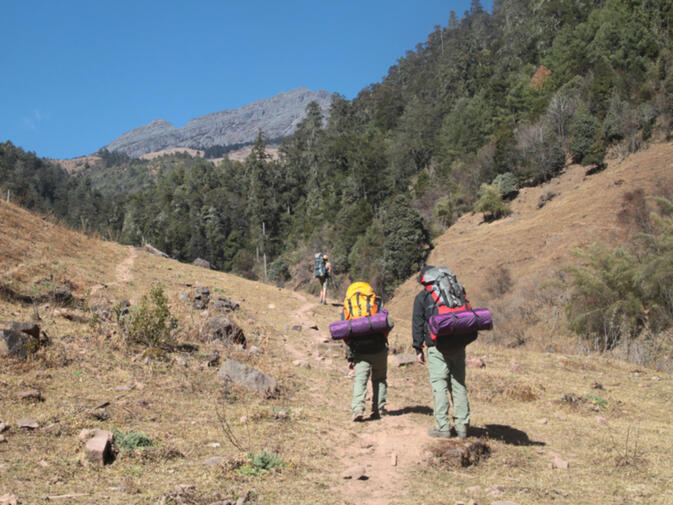 We awoke early the next morning, melted some snow for breakfast and drinking water, packed up camp and continued on our way. We followed the mining road up to its terminus, and after consulting the GPS, turned onto a faint trail up into the forest. After perhaps a further half-hour of climbing, we crested the summit and were treated to an incredible vista featuring a massive couloir replete with alpine lakes and dense evergreen forest. The view was flanked by the main peak of Laojunshan Mountain.

Best of all, there was no sign of human habitation. I'm not sure if it was a product of the area's relative remoteness, or strict enforcement of environmental regulations — as we were technically in the heart of the national park protected area — but this was one of the most pristine alpine areas I'd ever encountered in this part of Yunnan.

We scurried down a scree slope into the basin, and picked our way through the rhododendron forest, meandering around lakes and the occasional empty logging encampment. We stopped for lunch at the base of the main peak, and tried to take shelter from the wind, which was blowing quite violently. The slog up over the final pass was slow, and given the altitude of about 4,300 meters, was not without effort. From there, the trail wound down to another pond, where we stopped to soak our feet in frigid water and make a plan for that evening. 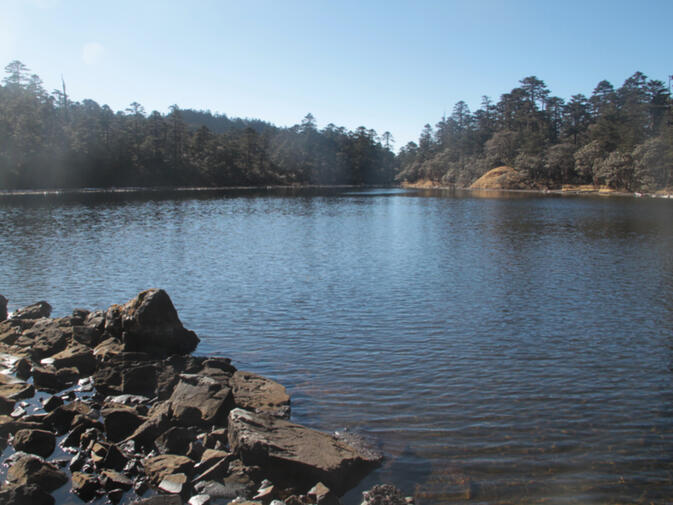 We didn't want to leave ourselves vulnerable to another night away from water, but decided that stopping for the day would leave us with a lot of ground to make up on the following day. I remembered from Google Earth that there were a handful of ponds on the other side of the mountain in the direction that we were heading. We decided to hope for the best and aim to hit one of them before dark.

Several hours later, the sun was beginning to set, and yet each pass was met with disconsolation as the possibility that we had been too ambitious began to set in. With perhaps 30 minutes of daylight left, we rounded a corner, and I heard the sound of running water. We all breathed a sigh of relief, and got busy making camp. By sundown, it was already close to freezing, and after a quick dinner of peanut butter noodles, I nestled into my sleeping bag for another night of fitful, high-altitude sleep.

The third and final day was among the best of the hike. The weather was spectacular, the scenery and views were awesome, and amazingly, there was no sign of other tourists. Alas, there were also no signs of golden-haired monkeys, which I had naively expected to encounter despite there being a confirmed population in the area of perhaps a few dozen.

As we began to descend, we saw increasing amounts of garbage, which suggested that at other times of the year, this trail might receive a bit more traffic. We passed a few enclosures, but these, too, were devoid of people and animals, all of whom had decamped to lower elevations for the winter. We emerged from the forest in the early afternoon, into a small Lisu village, where we were greeted with the usual stares of disbelief from the handful of residents. It was still another ten kilometers or so to Liming, along a dusty unpaved road, and we opted to phone our driver from the first day to come pick us up. Two hours later we were back in Shigu, and two hours after that, back in Dali. 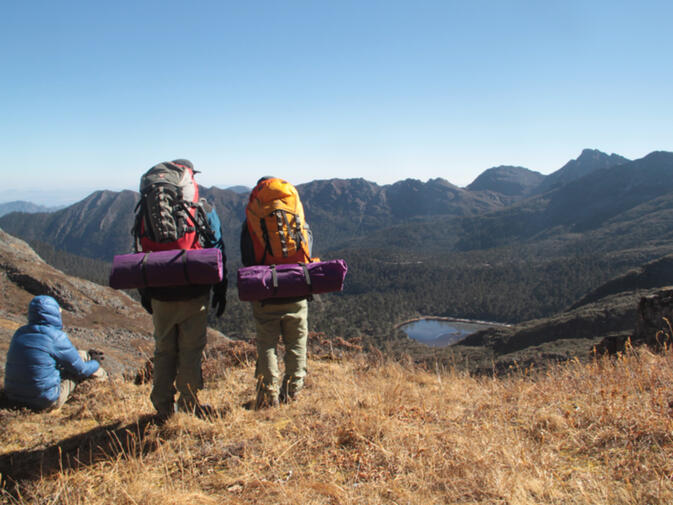 Thanks for the article! I love Laojunshan; it's amazing to see how it changes with the seasons. FYI people who want a base near the core conservation area for Yunnan Snub-nosed Monkeys can stay at a village called 四路子 not too far from 石鼓 (its on the map).

I'm sure the lakc of human habitation is because of the strict park law enforcement. How did you get in? You normally need to obtain a permit.