Yuxi begins experiment as one of China's 'Sponge Cities' 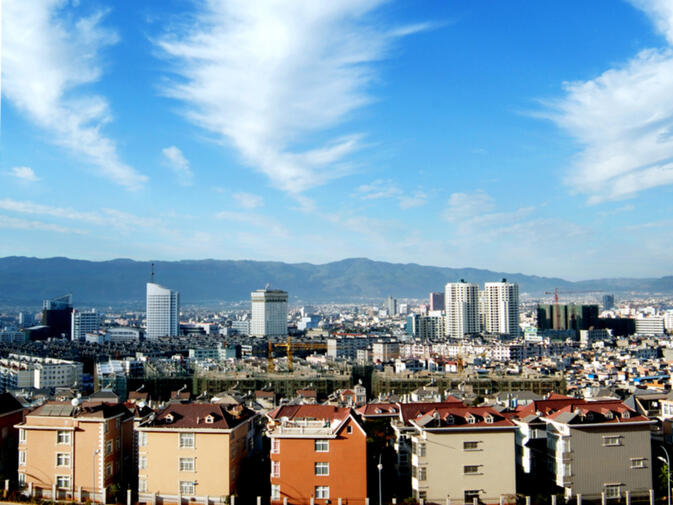 The city of Yuxi (玉溪) in central Yunnan is one of several municipalities across China to implement a green infrastructure pilot program meant to alleviate urban flooding while also curbing future water shortages. The so-called "Sponge Cities" (海绵城市) initiative is a three-year undertaking studying how urban areas can most effectively be redesigned and retrofitted to capture and effectively reuse rainwater.

Yuxi was chosen in 2015 alongside much larger cities including Chongqing, Xiamen and Tianjin. A multidisciplinary panel formed by China's ministries of Finance, Housing and Water Resources carried out the the selection process. Committee members stressed the need for variety in their choices of participating cities, choosing Yuxi because it features a unique set of circumstances. The prefectural level city of 2.4 million sits at a relatively high elevation — 1,600 meters above sea level — and over the past several years has built a series of urban reservoirs meant to stave off drought.

By merit of its selection, Yuxi stands to receive an estimated 1.2 billion yuan (US$180 million) in Sponge City funding over the next three years. The money will be put toward the construction of what the Chinese press is fond of calling "a more ecological civilization".

Such strategies acknowledge the need to make municipal areas far more adaptive in the face of climate change. In the words of Yu Kongjian, dean of Peking University's College of Architecture and Landscape Architecture, "The rate of flooding is a national scandal. We have poured more than enough concrete. It's time to invest in a new type of green infrastructure." What that means specifically covers a huge range of endeavors.

In Yuxi and other pilot program cities, updating rainwater collection systems, and in some cases rebuilding them entirely, will play an enormous and costly role. Much of the water captured during rainstorms will then be funneled toward newly built or existing parks and wetlands. These areas are planned to serve the dual purpose of providing residents with more green space options during dry seasons, while serving as collection points during the summer monsoon months. The parks and wetlands will feature plants that can withstand sporadic flooding, as well as the ability to help filter impurities out of rainwater runoff.

At their most ideal, Sponge Cities can be thought of as a closed system, capturing nearly all rainwater and utilizing it in some manner. In certain instances — such as with the construction of permeable roads and sidewalks — this may simply include mild filtering before runoff soaks into the ground and replenish groundwater supplies. However, the collected water can also be channeled to underground cisterns, used to irrigate rooftop and vertical green spaces, or supplement nearby agriculture areas.

Over the next four years, according to Yuxi mayor Rao Nanhu, urban planners expect to equip 30 percent of the city with drainage upgrades and gray water systems, as well as build new and adaptable green spaces. This percentage is expected to grow to 80 percent by the end of 2030. In 2015, when the Sponge City initiative began to gain national momentum, Qiu Baoxing, former vice-minister of housing and urban-rural development told The Guardian:

A sponge city follows the philosophy of innovation — that a city can solve [its own] water problems instead of creating them. In the long run, sponge cities will reduce carbon emissions and help fight climate change.

Thanks to GoKunming user Voltaire for first bringing the concept of 'Sponge Cities' to our attention in the Comments section of a previous article.

Finally - the beginning of separation of sewage from rainwater. Now - if they could only monetize the system in some manner, so they won't need to raise taxes.

Those are some big names Yuxi got designated with. Sounds like a worthwhile use of funds.

It will also play a major part in flood prevention further downstream. I lived just outside Gloucester, England in the late 1990s. We had floods year after year caused by the large paved areas of the cities in the Midlands, up to 100 km away.
With large paved areas the water cannot soak into the ground and slowly dissipate into the ground water system. Instead the water runs straight into drains and then is piped directly into water courses. This then over flows into rivers.

In the case of Gloucestershire, to protect the large towns downstream of the cities, they basically opened the floodgates knowingly sacrificing the smaller rural towns and villages further downstream.

The idea of a sponge city is beneficial to the city, if water can be saved for later use, prevention of flash flooding in the city itself during heave downpours, and for the areas downstream that get flooded as a result of run-off from paved areas.
This is a phenomenon that has been known for many years, but as cities (especially in China) are getting larger and larger, so are the problems that they cause.