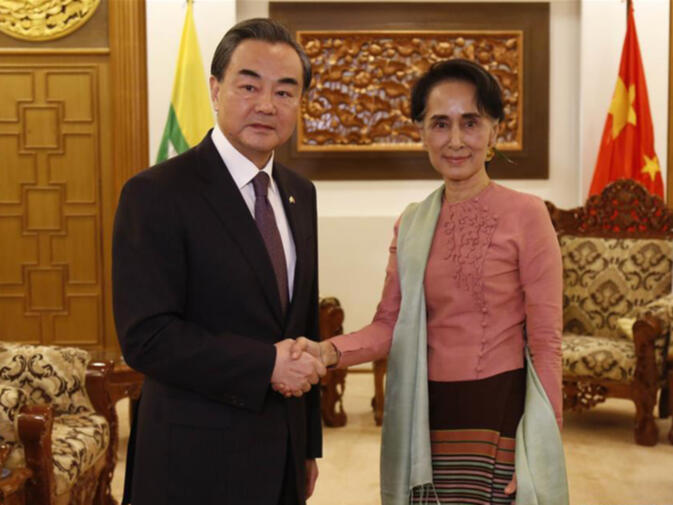 Wang traveled to Myanmar specifically to meet with Aung San Suu Kyi, leader of the National League for Democracy Party, which swept to power during Burmese elections held last fall. Although Suu Kyi is legally barred from becoming president, she nonetheless remains the country's most powerful political figure and de facto leader, as Wang's visit exemplified.

Underscoring her influence, Suu Kyi now holds the office of State Councilor, a position created specifically for her in the new parliament's first act of policy-making. However, her meeting with Wang this week was more official than substantive — an effort by both sides, at least publicly, to mend a relationship that has been on the decline for three years.

At a joint press conference, Suu Kyi called relations between Myanmar and China "very important politically[,] as well as socially and economically". For his part, Wang echoed the State Councilor sentiments, but also briefly touched on impending challenges, saying the two nations must "reinforce high-level exchanges as soon as possible [and] properly tackle issues facing their cooperation".

Those issues are in no way insubstantial, and include Chinese-funded infrastructure development, severe environmental degradation in Myanmar, cross-border drug trafficking and a series of long-standing civil wars fought along the Chinese border. For both sides, China's Yunnan province looms as a major player.

In the future, Wang will no doubt want to discuss the Myitsone Dam, a US$3.6 billion joint venture between the two countries that was suspended indefinitely in 2011 due to public outcry over environmental concerns. Designed to be the fifteenth largest hydroelectric station in the world, the dam's completion would have sent enormous amounts of power east into China via Yunnan.

Also of concern for the Chinese is a US$20 billion railroad that was expected to connect Yunnan's capital city Kunming to deep water ports on Myanmar's Andaman Sea coast. That project was unceremoniously shelved in 2014, although China continues to build its section of the railway toward border town Ruili (瑞丽) in apparent hopes the enterprise can be resurrected.

For the time being, both sides appear to be feeling each other out. The Chinese have for decades been dealing with a military junta, and must now adapt to working with a nascent democracy headed by a one-time political prisoner. Meanwhile, the fledgling Burmese government, guided largely by Suu Kyi, has a steep learning curve ahead. It must learn to weigh its self-interests with the demands of China — it largest trade partner — all while cultivating growing ties to the West.