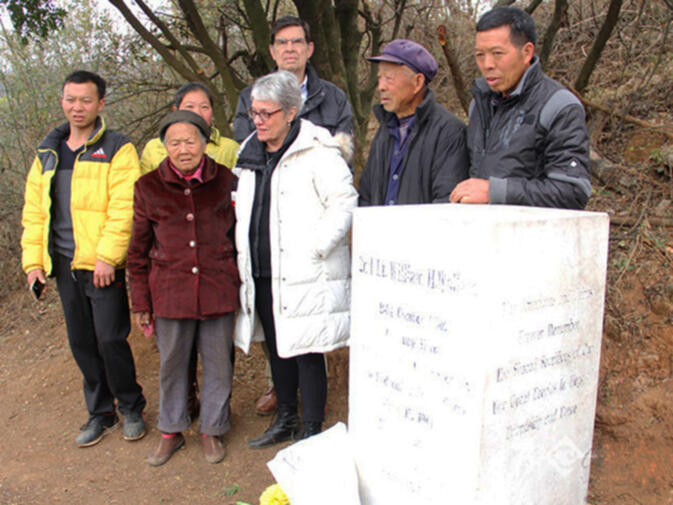 "I am deeply touched. Thank you for everything you did for my father!" said Judy, the daughter of a Flying Tigers lieutenant named William Wallace. On February 22 and 23, Judy, along with her husband, followed her father's footsteps in Yiliang (宜良) and Songming (嵩明) counties.

The monument to William Wallace is about a 30-minute walk from Qingshuitang Village (清水塘村) in Yiliang. When the monument finally appeared before her, Judy, now in her seventies, burst into tears. "I've never seen my father. This is the first time I've gotten so close to him. I grew up in the United States and I've looked up to father as a hero since I was a little girl, but I did not expect that he is also regarded as a hero here in China," said Judy. After a three-minute silence, she placed down a bunch of flowers at the base of the monument. 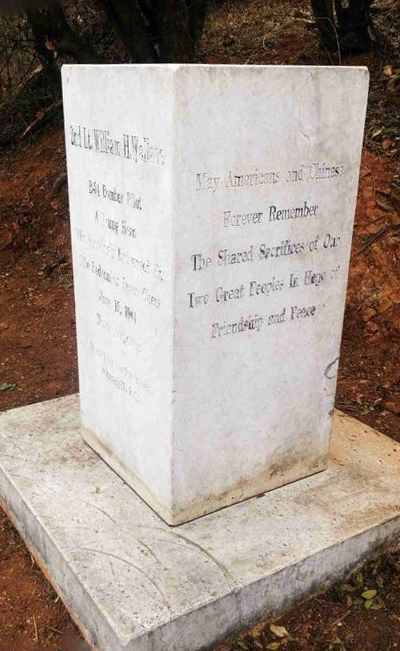 The memorial to William Wallace weighs about one ton. Inscriptions on two sides are in English, while those on the opposite sides are in Chinese. It was erected in February 2006 at the proposal of Patrick Lucas of the United States and Zhou Zuxin from Guizhou province. Both are members of Shared Glories, a non-governmental organization studying Sino-US cooperation during World War II. When Shared Glories got in touch with Judy last September, Lucas began to make arrangements for her to come to China and find her father.

According to Li Junhua, a villager who participated in the monument's erection, Qingshuitang went so far as to give Wallace a Chinese name — Li Shuhua (李树华) — so that he could become a member of the Li family. Li Junhua considers Judy an elder sister, and was happy to see this distant relative who came from afar. "I myself was once an army man, so I know peace and happiness are hard-won," said Li. He hopes that the monument will be protected from generation to generation, and that Judy's family will once again come to the town in the future.

It happened to be Lantern Festival — or the fifteenth day of the first lunar month — when Judy and her husband visited Qingshuitang. The couple joined villagers in their celebration and made a donation to students at the local primary school. Judy only had a cursory understanding of Yunnan before her visit, but now feels attached to this land. "I was an only child at home. Now I'm part of a big family," she said.

Judy and her husband also visited Yangjie Airfield in Songming County, which was in use during World War II. She spoke with still-living airfield construction workers and gave them gifts. "By visiting this place and communicating with the people here, I've developed a clearer and more complete understanding of my father. I'm also deeply touched by the local people's enthusiasm, hospitality and protection of history," she said.

The Flying Tigers, also known as the American Volunteer Group, came to China and participated in the War of Chinese People's Resistance Against Japanese Aggression in July 1941. Wallace was deployed to China in late 1943 as the captain of a bomber. In June 1944, his plane crashed near Qingshuitang, and William Wallace lost his life at the age of 25.

Editor's note: This article was written by Liu Ziyu (刘子语) and originally published by the Yunnan Daily Press Group. It is reprinted here with permission.

The AVG, the original flying Tigers, were a mercenary group of American airmen under the command of Claire Chennault. The AVG was disbanded in July of 1942, but following their disbandment the name was attached to the airmen of the regular US Army Air Corps, who flew out of Kunming, for the most part, until the end of World War II. Some of the original AVG members resented this, but the name pretty much stuck and was used in war propaganda. William Wallace must have been a member of the US Army Air Force (Corps?), to judge by the dates of his participation in the war effort and of his death.
Both the AVG and the air force played very significant parts in providing air cover for ground operations and shooting down Japanese airplanes.