By Jordan Steinberg in Travel on February 3, 2016 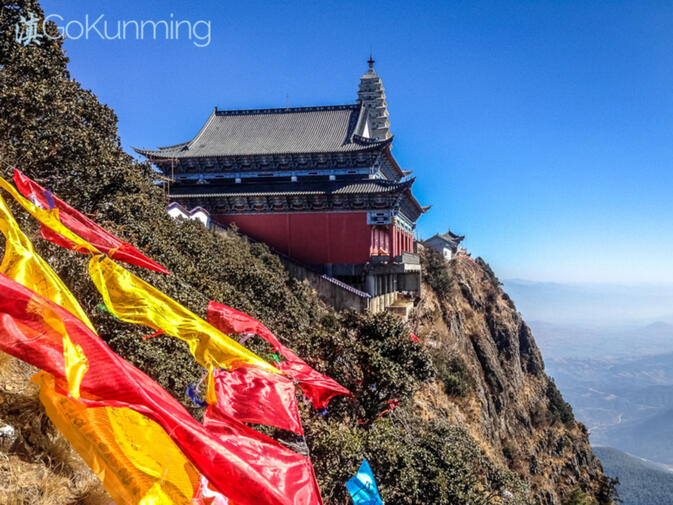 Just outside of Dali (大理), a ninety-minute drive away, lie some of the greatest and most accessible views on offer in Yunnan. Rising to a height of 3,240 meters, Jizu Mountain (鸡足山) — literally Chicken Foot Mountain — towers above all of its surroundings. It is no ordinary peak, as it is home to several temples and a dizzying amount of history. 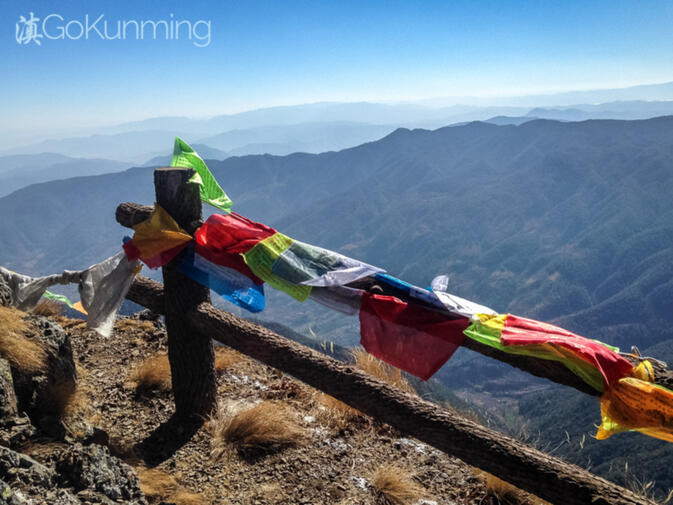 A bit of background

Jizu Mountain's religious story stretches back nearly 1,000 years. Beginning during the Three Kingdoms period, several nunneries were built upon its slopes. But it was not until the time of the Tang Dynasty, four hundred years later, that the first known Buddhist temple was completed. Throughout the following centuries, construction on many other shrines and sanctuaries continued. By the the late seventeenth century, during the Qing Dynasty, Jizu Mountain's religious importance reach its zenith. At that point, according to official historical accounts, there were 42 temples and monasteries, 65 separate nunneries and more than 5,000 religous devotees residing on the mountain. 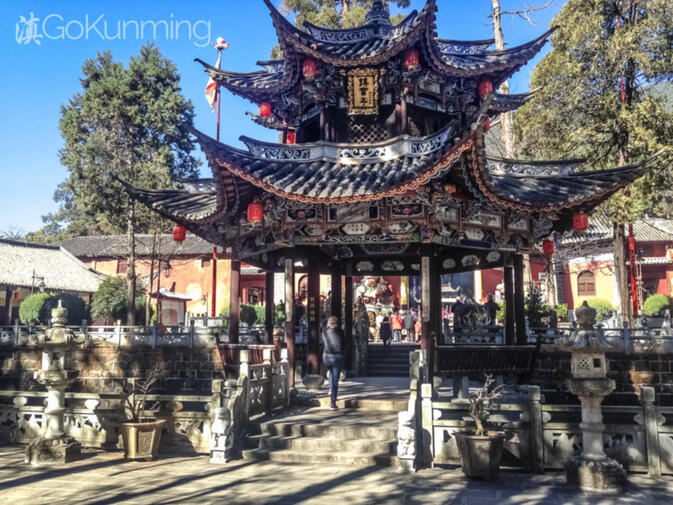 Today, however, not much remains of those ancient structures. In the midst of the Cultural Revolution, most were destroyed. At the mountain's summit, only two temples and a gate remain, and these structures needed serious updating following the 1960s and 70s. While a group of monks still call Jizu home, their numbers are now a far cry from the 5,000 of old.

The small number 'relics' that still exist atop Jizu Mountain often reflect modern-day China rather than ancient dynasties or once-powerful regional kingdoms. Jinding Temple (金顶寺), the main attraction of the mountain, has food vendors — complete with hot dogs and cold noodles — up and down the final path leading to the entrance. There are even a couple of restaurants and a hotel. The temple itself is gorgeous, and appears as old as one would expect. However, along with the familiar sounds of construction, there are plenty of indications even these holy places may soon succumb to further forms of 'touristification'. 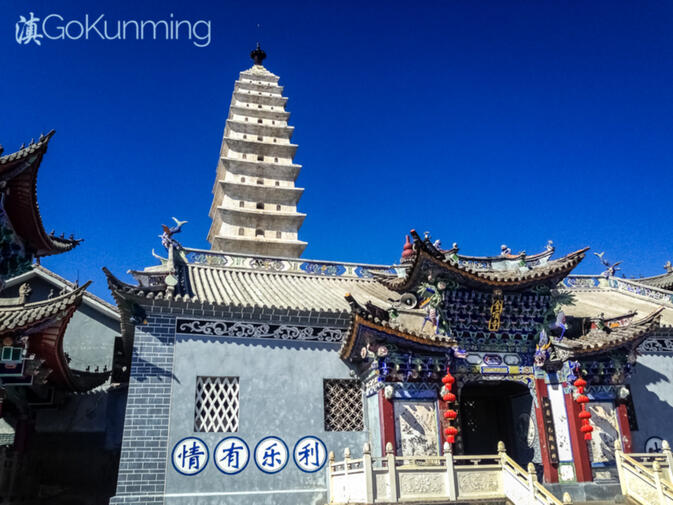 Getting up the mountain

As it currently exists, there are three means of reaching the summit. The first, and by far the easiest, is the cable car, which will get you there in five minutes. The second are the ancient stone stairs, which snake up the mountain face, and take approximately two hours of climbing. The last, and certainly the most difficult and time consuming, involves hiking over a ridge and up the back of the mountain. With the latter, one should expect a two or three day trek, depending on level of fitness.

I have had the opportunity to experience all three of these options across two separate occasions. Naturally, I did them in reverse order. In 2013, during my first visit to Yunnan province, I embarked on a four day trek — option three — from Xiaguan (下关) to Jizu. The hike took me from the city to Wase Village (挖色镇), and then on to Niutou Mountain (牛头山). On the third day, we finally crossed the Shushen Gorges (舒沈三峡), eventually setting foot on Jizu Mountain, where I stayed the night at the summit. On the final day of this hike, I trekked down the stairs — option two — to the base, where I caught a ride to Dali. 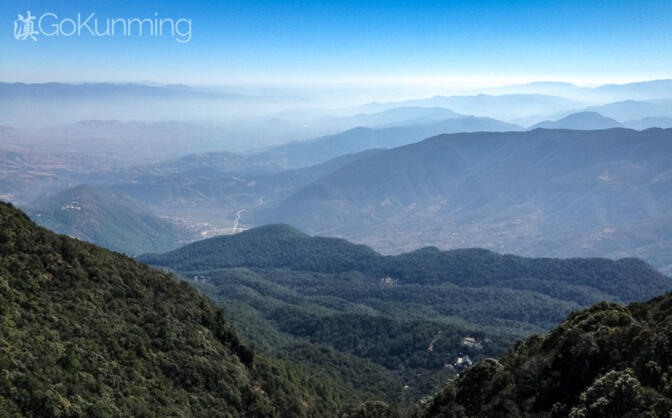 It was not until earlier this month that I took the easy way up — option one. Before arriving, I had assumed that it would take mere minutes to get from the car to the top of the world. I was wrong. First, there was the matter of gaining entry to the park. A 15-minute drive from the entrance led me to a terminal, where I had to catch a bus to reach the cable car station. After another 15-minute ride, I was finally at the base of Jizu Mountain.

Riding the cable car is nothing short of worth it. For five minutes, I had gorgeous views of the valley below, complete with the snow-capped mountains in the distance. Just over the ridge, I knew, was Erhai Lake (洱海). Looking directly below, I saw the stairs I had trekked down years earlier. 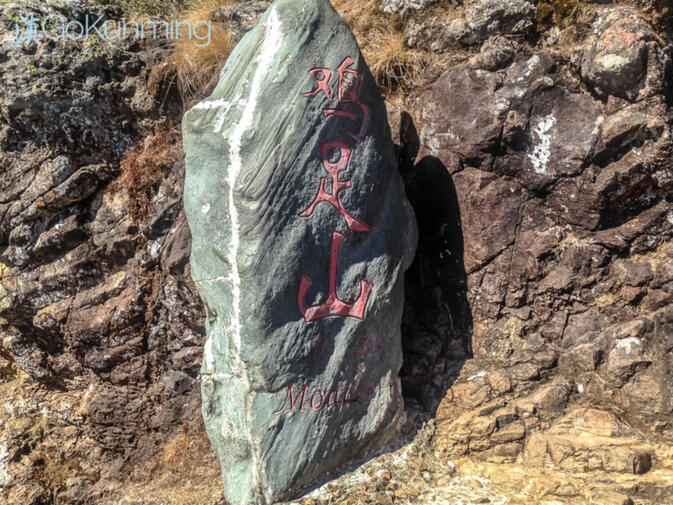 Once at the top, there are a couple different paths to get from the cable car to Jinding Temple. The first is a straight shot to the summit, while the other is slightly more meandering. The latter is definitely the way to go, as it provides stunning views of the surrounding mountains and of the valley floor. Regardless of the chosen path, visitors will inevitably end up at the temple. With a spire-like white tower jutting out of the center, and prayer flags present everywhere, this citadel-esque structure is both unique and unmissable.

When I visited in 2013, there was a building housing the monk's quarters just outside of the temple. At the time, one could give a donation, and in return receive a meal with the monks. Now, unfortunately, it appeared that the bunkhouse had been torn down to either be renovated, or to provide space for an extension of the new hotel next door. 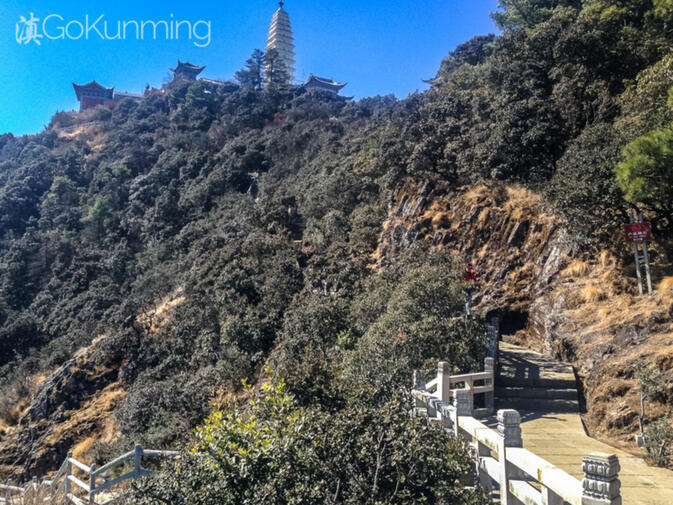 Jizu Mountain is a pilgrimage site for Buddhists from all over the region, so Jinding Temple is pretty much their terminus. It can get crowded. However, going just past the temple and hotel, leads to the most authentic and least trafficked part of the complex. Quite quickly, you arrive at a cliffside clearing. It is likely that very few people will be anywhere beyond the temple, so that makes this area special unto itself. The views and temple are well worth the effort, but for those seeking a bit more, this detour is a nice addition.

Granted, it does not initially look like much, unless you know what you are looking at. There are two small relics on the side of the path that seem to perhaps be the only pieces of true history left on the mountain. The first looks like nothing more than a rubble pile, but close examination reveals that each of rocks are inscribed with Tibetan script. The second attraction is a white 'Buddha eyes' stupa that looks as if it was taken straight from Nepal. 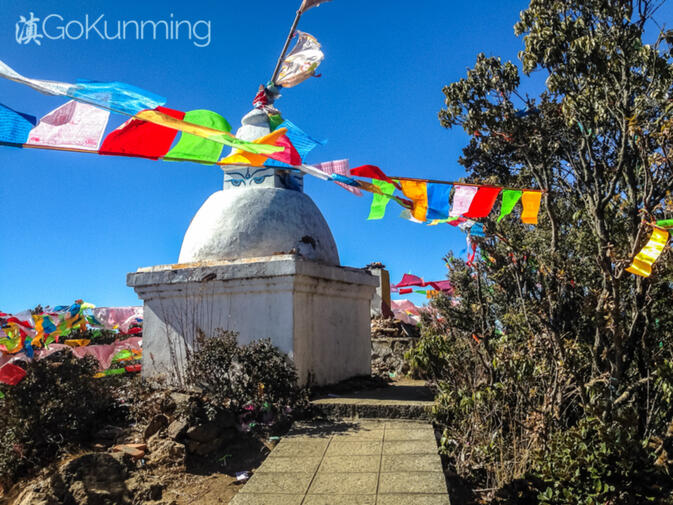 As ancient and unchanging as Jizu Mountain may appear from the valley, its man-made structures have been through a lot, and continue to change today. In 2011, there was no cable car option. In 2013, there were no food options beyond instant noodles at the hotel, unless you wanted to dine with the monks. It is entirely likely that things will change again by 2017. To that end, ensure that you can make a visit to Jizu Mountain as soon as possible, as I certainly plan to do. 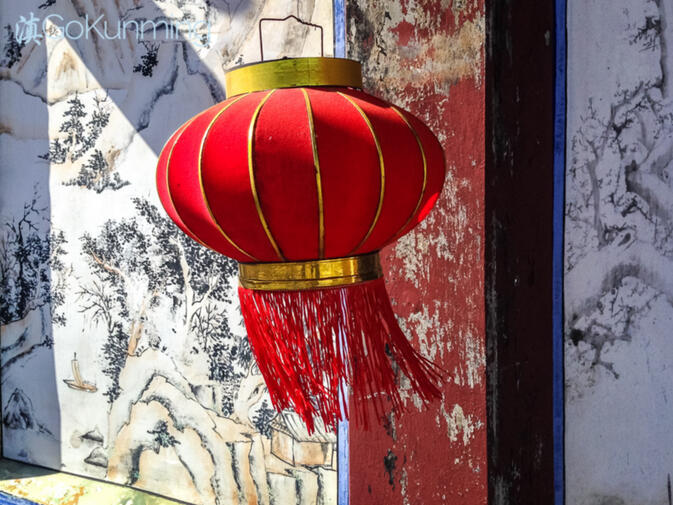 Jizu Mountain is 64 kilometers northeast of Xiaguan. Entry to the park is 80 yuan per person and a roundtrip ticket on the cable car costs an additional 75 yuan. A shuttlebus ticket between the two is yet another 20 yuan. If you have a car or driver, it costs ten yuan for parking. Buses to Jizu Mountain leave from Xiaguan's Xingsheng Road Bus Station (兴盛路客运站), and tickets for the 90-minute ride run 25 yuan per person. Of course, for the adventurous traveller, these costs can be largely mitigated if you possess the time and energy to walk there on your own.

If you are interested in visiting Jizu Mountain, or traveling into or out of anywhere in Yunnan, we strongly recommend contacting the good people at Wonders of Yunnan Travel. They customize individual and group adventures to all points on the map, and specialize in making your trip South of the Clouds extraordinary. 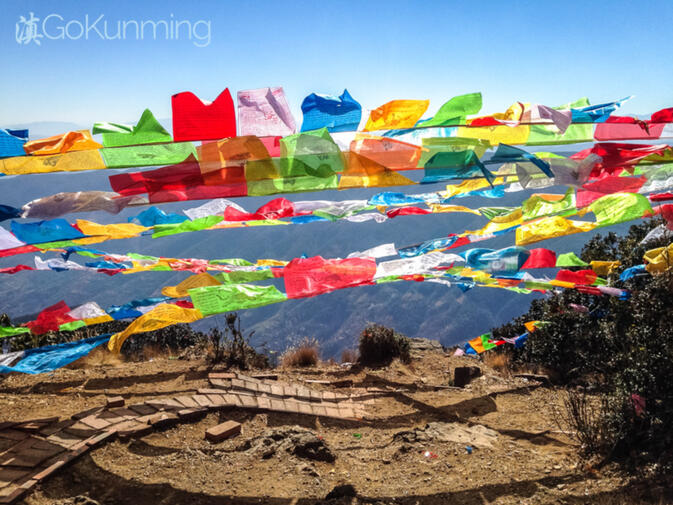 The original and "real" Jizu Mountain is actually in India - not too far from Bodhgaya. Long ago Dali built up a "fake" (sort of) Buddhist kingdom and Jizu Mt, and its legend, became part of this. Interestingly also ultra-pious Tibetans picked this up somehow - or at least - Jizu is part of their holy mountains in a way or another. Cangshan used to be called Vulture Peak, also adopted from India and so on. And who knows what else, there are legends of Buddhas tooth in Dali too. Not too much is known about this all anyway, as much was destroyed, but to add to the article, it may be interesting to know that the original Jizu is in India.

Someone else can comment on the Tang dynasty thing :)

I have a map of the place from the republican period which is interesting to compare to the current situation. Basically, today nothing there is ancient at all except for the tower at the top, whose majesty is destroyed by cookie-cutter temple crap that has been dotted about. The original temples up the mountain have been turned in to government-run Mahayana Pure Land temples with fake monks, instead of real working temples with a Vajrayana bent.

You can stay at the top. Originally you could stay part way up, but the government has stomped on that with the installation of the cable-car.

You can do the whole thing in a day trip from Dali. Get up early and bus to Xiaguan. From Xiaguan bus to Jizushan. Walk up the mountain, cable-car back down, bus back toward Xiaguan (may need to change buses once), then bus back to old town Dali.

It's a very underrated day out, but a bit sad to look at how important it was historically, how natural the place must have been, and what it has been turned in to.

Many Tibetans still visit, it is good to see.

It's interesting that Cangshan used to be named Vulture peak .
I occasionally see vultures in winter while flying on the Cangshan range.
Vultures are curious which brings them close to my wing for further inspection.
photos.smugmug.com/[...]