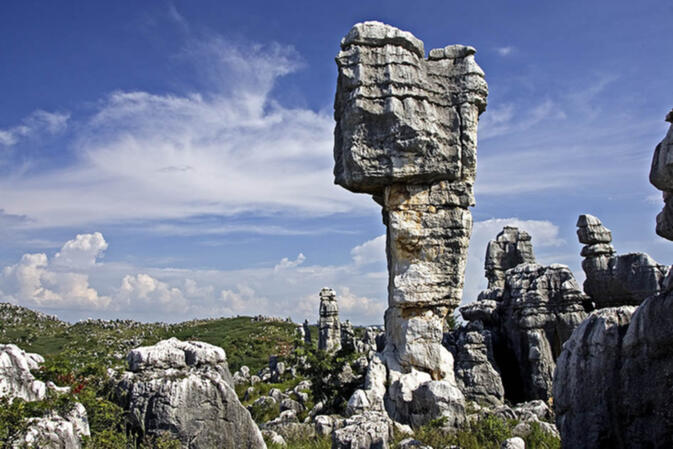 On the final day of 2015, one of Yunnan's iconic scenic areas passed a milestone. The four millionth visitor of the year entered the Stone Forest. She was presented with a golden key and commemorative sash while park employees hoisted her onto their shoulders.

The large rise in tourist numbers last year has been attributed to wholesale "renovations and upgrades to tourist facilities" overseen by scenic area management. Coinciding with the improvements, Stone Forest administrators sent eight public relations teams across China over the past two years in an attempt to popularize the UNESCO World Heritage Karst formations domestically.

'Renovation' may be the wrong word, as many of the improvements to the sprawling tourist attraction involved demolishing old, outdated buildings. This was done because several maintanance structures "marred or blocked entirely" some of the more popular sights. The largest project involved moving an entire Yi minority village — called Five Trees — to a new location. Editor's note: This article is based on a press release published on social media outlet Weixin.

4m reasons not to go

This place is so boring. BORING.

I really enjoyed the visits I made there in the past, but that was before it got so expensive and crowded. Not sure I'd ever go back now. Same with LiJiang.

Went there once and found it interesting just to wander around the surrounding area on my own - plenty of interesting limestone outside the designated area, & people you meet are neither tourists nor people trying to sell you tourist experiences. And of course it's free.

lamest stupidest most boring tourist attraction in all of china. **** this place