Around Town: Exploring a forgotten corner of old Kunming 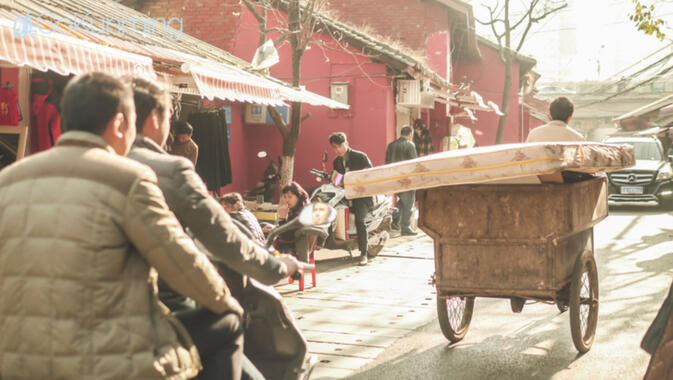 Mrs Tang knows her way around her little street. Situated right underneath the large bridge on Yuantong Jie crossing the Panlong River (盘龙江) and mimicking the shape of Hong Kong's Tsing Ma Gate, albeit much smaller, lies a little treasure trove of a bygone time.

The old alleys of Kunming are rare and hard to find these days because of an intense modernization effort that began back in the 1990s. But the Lingguang Jie (灵光街) area near Yuantong Mountain remains much the same as it has for decades. The characters roaming the street appear nonchalant about the hustle and bustle in nearby commercial neighborhoods, finding respite just beside the river. But no one knows how much longer this way of life will continue.

Today, like Mrs Tang, most of the vendors sell clothes, shoes, antiques and various knick-knacks.

Inside the neighborhood's vividly painted brick buildings, you may find the compressed Pu'er tea cakes so popular in Yunnan — packed tight to conserve freshness, as well as for the convenience of bringing them back to family members in faraway villages. You may also find massive smoking pipes, an assortment of odd Chinese pharmaceutical products, Vietnamese coffee and Buddhist paraphernalia. On one end of the road, there are food stalls that get increasingly busy in the evening selling famous grilled tofus, while on the other end, sit noodle shops serving ersi (饵丝) and mixian (米线). 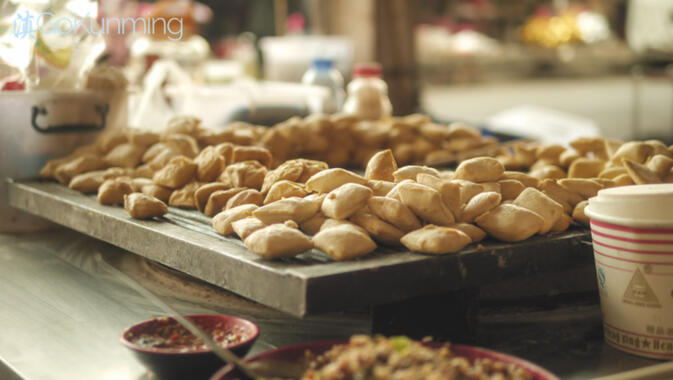 "The street has at least 300 years of history," said Mrs. Tang, sitting next to an array of her bargain shoes. Walking down the entirety of Lingguang Jie takes you no more than five minutes, yet one gets the impression of traveling back in time to another era. The surrounding modern area seems like a sexier and swankier older brother who traded his traditional Mao suit for a sleek leather jacket. 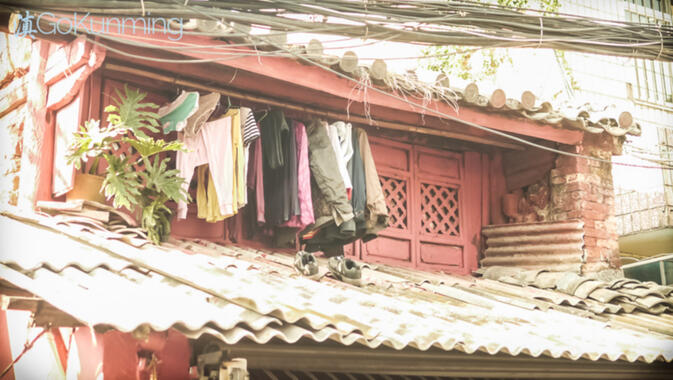 Between 2007 and 2011, then Party secretary of Kunming, Qiu He (仇和), launched an aggressive campaign to modernize the city. His development policies for the urban core of Kunming were seen as largely successful, particularly in constructing a relatively sophisticated transport infrastructure. But Qiu ended up being mostly remembered for demolishing the dilapidated quarters of the city called chengzhongcun (城中村), which where old and poorly built 'urban villages' razed to make way for large-scale real estate projects. 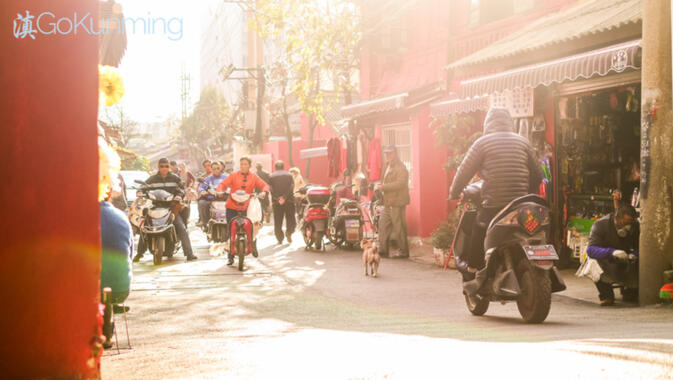 My gaze straying from the cold skyline to the vibrant old alley before me — like a child opening a box of chocolates — I poked around in all the different shops, exploring the various drawers with jade bracelets, old coins from Indochina, Tibetan-style bags, and Maca root powder products.

That was when I stumbled upon a nondescript little shop, into which I could barely see through the steel-barred windows from the outside. It piqued my interest. I stepped inside, and asked the owner numerous questions about the area, but she seemed reluctant to answer, eyeing me with a suspicious look on her face. Then, I asked her about a toothpaste brand that I had never seen before, the box indicating it was made in Kunming and called Sanqi Toothpaste (三七牙膏).

"So this is a herbal toothpaste? Do a lot of people use it here?" I inquired. She looked at my camera, with the lens unattached. "Are you a reporter? Get out if you are here to ask me questions and take photos. Get out. You won't buy anything anyway," she chided. Not at all trying to mask her growing annoyance, she shuffled me out of the shop.

I could not help but feel bad for her, so I bought the five-yuan toothpaste and thanked her before leaving. She appeared appeased but I could tell that her frustration was resonant with a lot of the other shopkeepers. They see tourists waltz into their neighborhood, take a bunch of photos, but not stop to spend a penny. The disruption is tolerated and life goes on. 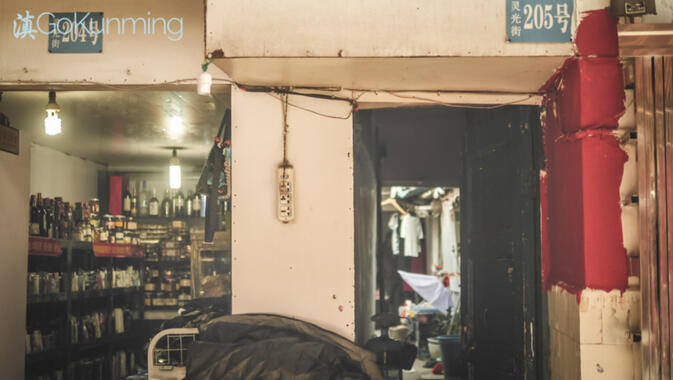 "There are tourists who come here, but we depend on old customers who come back here to keep buying the goods we sell," Mrs Tang confided. Later on I found out the street has been covered extensively in local media, and is admired by many Chinese travelers who visit Kunming. The discussions in online forums point to one conclusion — people do not want Lingguang Jie to disappear. 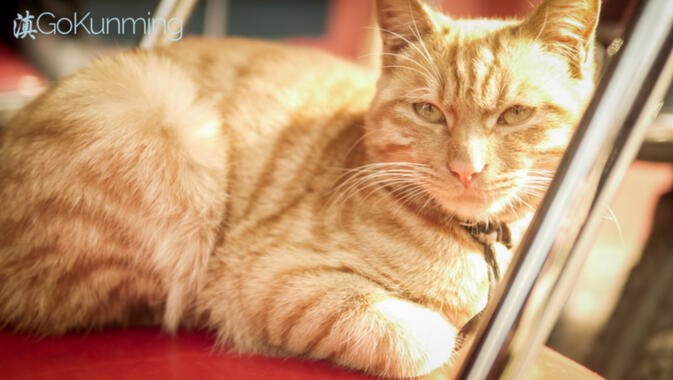 Having said that, the underlying issue is a double-edged sword, pitting the city's drive for modernization and desire for preservation simultaneously. It occurred to me that the locals did revamp these old buildings not so long ago, as I could see a veneer of fresh red paint concealing the mud brick walls behind. 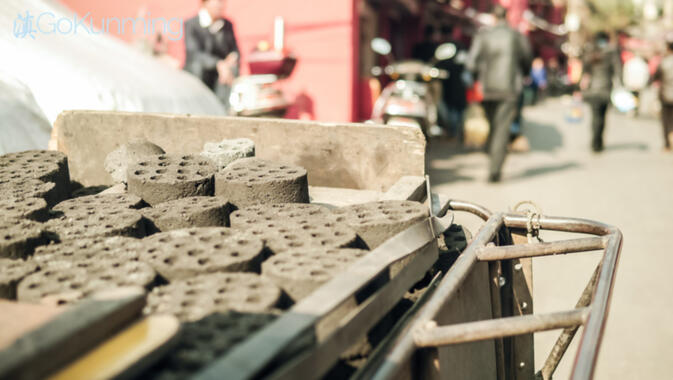 But as reflected by the reactions of many locals, this corner of Panlong District is also at risk of becoming an antiquated area. The inhabitants are anxious for a faster pace and rising standard of living. They are concerned with access to clean water, more electricity and high-speed internet, as they realize that keeping the old structures may result in remaining apart from the rest of the city grid. Such concerns are exemplified by the obviously outdated sewage system evident on Lingguang Jie.

These concerns were palpable, but since it was a bright sunny afternoon, everybody was in a merry mood. My stomach began to grumble at this point. But the rumbling noise was muffled by a melodic tune coming from a man fiddling with a mandolin. In a nice coincidence, the shop behind the street musician was serving all sorts of noodles. I hurriedly entered and ordered a bowl of ersi, a kind of chewy rice noodle served in soup with minced meat and vegetables. 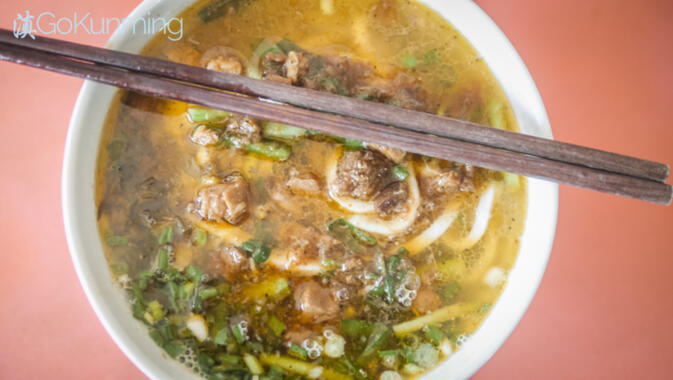 "How do you call this instrument in Chinese?" I asked the enigmatic performer, while waiting for my food. "We call it wenziling [蚊子铃]," he replied. 'Wenziling' literally translates to 'mosquito bell' and, come to think of it, the high-pitched tones did remind me of the buzzing sounds mosquitoes make. 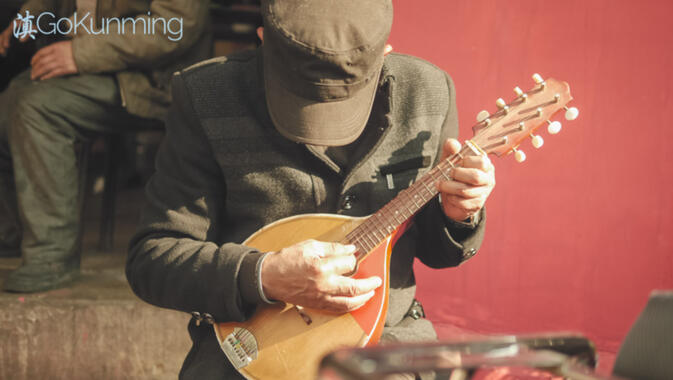 "He is always here, can't kick him out," the owner said as she brought my bowl of hot noodles over. Another man walked past and commented, "You already played this 70-80 times!" The old musician ignored him and kept playing. 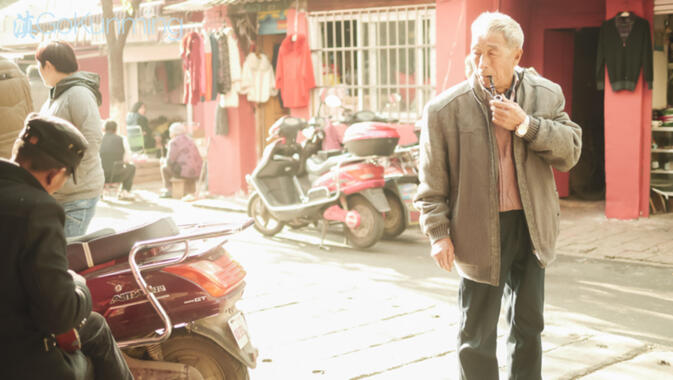 So, the afternoon ended with a bowl of ersi and some cathartic strumming, with the cries of children and growls of zooming motorbikes. Last but not least, there is still a tube of old Kunming herbal toothpaste in my bag as a souvenir. 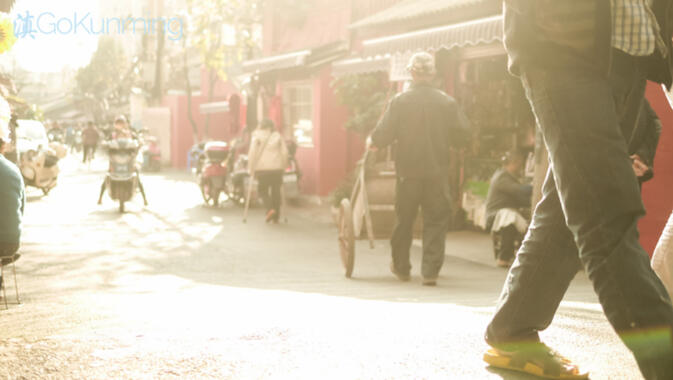 In future Chinese people can travel to Europe to see old buildings and villages. Not the fake old, but real old villages. Maybe will be nice journey to see stone houses, old wooden houses, countryside, etc.

Brush your teeth with sanqi and go back for more. Then you'll win some trust over time.

I went here based on this article and all I can say the lily was a bit gilded. A little street about 100 yards long, painted all red and reminded me the town Largo in High Plains Drifter. The shops, and that's all they were, sold cell phone covers and pricey trinkets. Not a total waste of time, but nothing authentic or traditional to be found here. If you go a little further, under the bridge, there are some interesting alleyways and street markets to the left, and panlongjiang river to right.