By Patrick Scally in Features on November 6, 2015 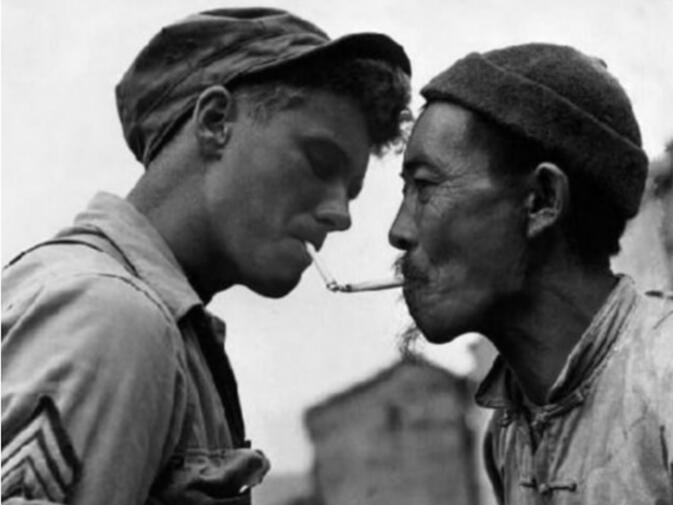 Yunnan was one of the last bastions of hope for China over the last three years of World War II. Japanese forces had choked off nearly every other corner of the country and were threatening to engulf all of neighboring Burma as well. The defense of Yunnan became the focus of an intense international mobilization spanning India, Southeast Asia and southern China.

Tens of thousands of civilians and military personnel perished in the province, with even more dying across the border in Burma. Even during the war, the Allied campaign in what is today called Myanmar was referred to as the 'Forgotten Front'. Remembering the fallen properly is an ongoing task in China even today, one that provincial and national historians are more openly embracing as Yunnan grows in wealth and regional prominence.

Reflecting this sentiment, a newly unveiled memorial plan is taking shape in western Yunnan's Shidian County (施甸县). When complete, it will preserve a 70-year old battlefield, see the construction of a World War II history museum and the establishment of a sprawling cemetery envisioned to hold the repatriated remains of up to 50,000 slain Chinese soldiers.

The concept details, according to Ed Knapp — founder of Vintage International Design and lead consultant for the project — have not been fully decided upon, but are quickly coming together.

The official we are dealing with is very impressed with the layout and overall feel of the park and gardens making up Arlington National Cemetery in Washington DC. Of course this project won't be exactly the same. Arlington is a reference point, and we will incorporate a range of Chinese influences, including fengshui, into the design.

All of the memorial planning is focused around the Huitong Bridge (惠通桥), a span across the Nujiang River (怒江) fought over by Chinese and Japanese forces for the better part of three years. From 1942 through 1944, both sides dug in on opposite shores of the waterway, shelled and dropped bombs on one another and died in their thousands. The Japanese were intent on cutting off overland supplies and controlling the Burma Road, while the Chinese were desperate to keep this vital conduit open.

The centerpiece of the memorial is Haipo Mountain (孩婆山), where the Chinese Expeditionary Force bivouacked in order to defend the Huitong crossing. Today it is a forested hill which will soon become the setting for battlefield restoration work, including the preservation of bunkers and still-existing hand dug trenches and foxholes. Ringing the mountain and leading to the soon-to-be-built museum, is the old Burma Road, still paved with its original flagstones. 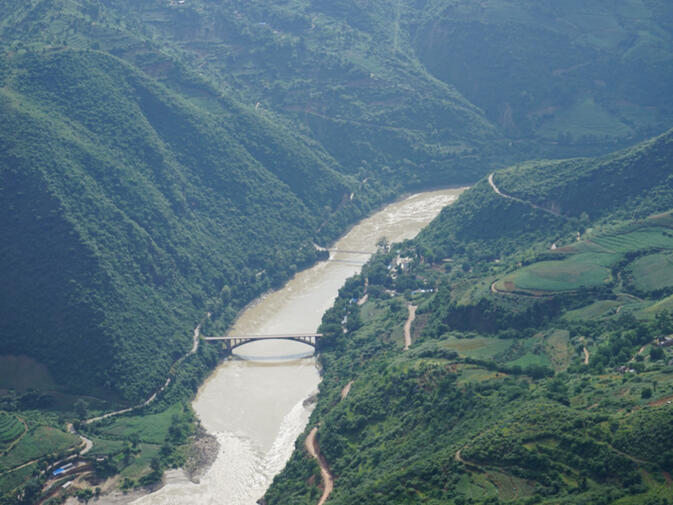 The old and new Huitong bridges. The original is in the background and the new museum will be built on the bluff to the right

The museum will overlook the old Huitong Bridge and feature, says Knapp, "a multimedia interactive space focusing on statuary, murals, and a restored Curtiss P-40 Warhawk. The bridge span still stands just downriver of the planned museum, although today only as a monument. It features the wooden planks used when the roadway was rebuilt after Chinese and American troops blew it up to prevent a large-scale Japanese advance in 1944.

Much more recently, while China celebrated the seventieth anniversary of Japan's World War II surrender, the bridge played host to a unique event. Seventy surviving veterans — both American and Chinese and most in their 90s — from the American Volunteer Group, Flying Tigers and the United States Air Force visited the bridge they once fought to protect.

Now, in a more somber vein, the repatriated remains of soldiers have begun to trickle across Yunnan's border from Burmese burial sites. As Chinese soldiers were killed in World War II combat, their compatriots did as best they could to bury them. Today, with painstaking care, many graves are being disinterred in Myanmar. The contents of each burial site are catalogued, DNA tested when possible, and packed into ceremonial urns. Funding for this delicate work has largely been provided by the Shenzhen-based Longyue Charitable Foundation (深圳市龙越慈善基金会).

The first repatriation shipment included the 'souls' of 347 soldiers and arrived at the Chinese border on November 5. The urns will slowly make their way by convoy through Tengchong and later be stored nearby Haipo Mountain at an estate once commandeered by Guomindang general Song Xilian (宋希濂). There the remains — and the thousands of others expected to join them over the next few years — will wait at least until the end of 2016 as the memorial is designed, agreed upon and finally built. 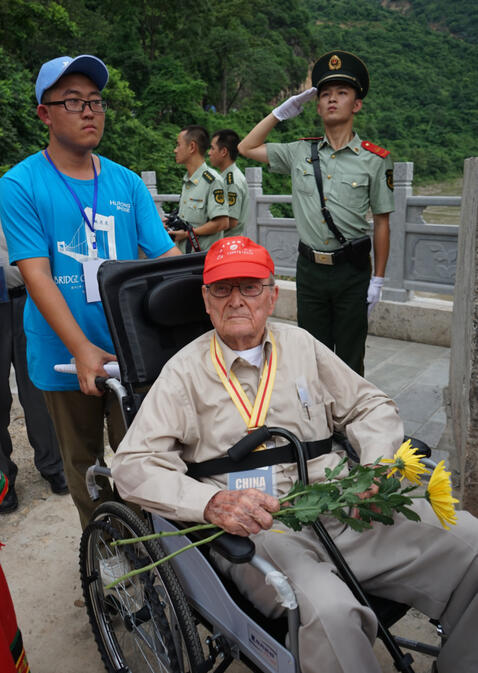 Veteran of the 'Hump over the Himalayas', Frank Losonsky, visits Huitong Bridge on September 7, 2015, 70 years to the day World War II ended in Asia

Lookin at that first photo, a comment here. Just from curiosity.

Chinese ppl - lets say in general - are/were not too obsessed by being cool and lookin like James Dean or Marlon Brando. Even less the farmer, so. They are way more practical.

Lets make this assumption theres this US camera guy showing the farmer on tjat photo, how to grimace like an angry James Dean. Taking fifty shots and several smokes, finally one comes out.

Just as Auguste Francois and Joseph Rocks photos - and these are the most famous from Yunnan - are also partly setups, so are others.

Its not that bad anyway, its quite allrote, but Chinese farmers do not look like James Deans.