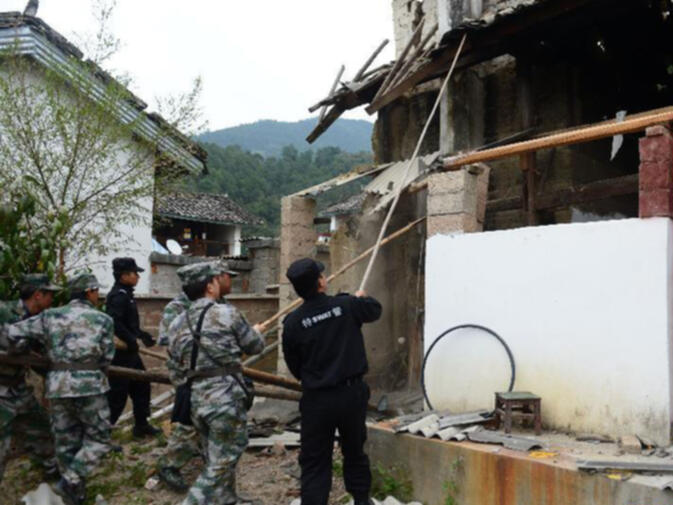 A moderately powerful earthquake hit a mountainous and largely rural part of western Yunnan on the evening of October 31. The 5.1 magnitude temblor struck Changning County (昌宁县) at 7:26pm, damaging thousands of buildings and houses but fortunately causing no casualties. Relief work in the rugged and isolated area is ongoing.

Official reports compiled over the weekend estimate 12,000 structures suffered damage during the quake, most of them houses. The majority of the wreckage was centered around the town of Datianba (大田坝), where, according to the official Changning County website, the land is "97 percent mountainous, with 80 percent of the population living in rural hamlets". The majority of buildings in the area are single-story, mud-brick affairs.

Government officials say 168 houses collapsed completely, while an additional 9,000 have been deemed uninhabitable. A 20-person inspection crew was dispatched from Kunming to further inspect residences in far-flung villages, as well as to coordinate relief efforts from near the quake's epicenter.

Some 800 students attending schools in or near Datianba went to class today outside on basketball courts, while relief efforts were coordinated out of a preschool classroom amidst children's toys. In total, 200 people — most of them local firemen and police — are working as coordinators, ensuring people in need have access to tents, food, water and other necessities.

The provincial government dispatched 400 tents to the area, although it appears most displaced residents are living under makeshift tarpaulins or cramming into stable buildings overnight. Electricity and telecommunication services were temporarily knocked out on Friday, but have since been restored.

The quake epicenter was pinpointed roughly 85 kilometers south of the prefectural capital, Baoshan (保山). The region where it hit is predominately poor and agrarian, with most of local income generated on small family farms or tea plantations. The majority residents are Han Chinese, with small concentrations of people from the Bai, Bulang, Dai, Hui, Miao and Yi minorities.

Remote places such as Changning County are the focus of current provincial efforts to better connect distant locales across Yunnan with more prosperous urban centers. The strategy is, to a great extent, based on infrastructure projects hoped to increase the flow of commerce into detached rural areas. The ultimate goal is to eliminate 'absolute poverty' by 2020.

In fact, Yunnan Party Secretary Li Jiheng (李纪恒) was in the earthquake-hit region only two months ago promoting such initiatives. It appears he may need to return soon to both oversee and inspect the rebuilding efforts that inevitably follow natural disasters in Yunnan. Luckily, this time he will not have to console grieving families as he did following a 2014 earthquake in the province's northeast Ludian County (鲁甸县) that killed more than 600 people.