This week saw auspicious news emerge from the Yunnan Wild Animal Park (云南野生动物园), as five healthy white tiger cubs were born without complications. This is the second time in five years the zoo has overseen the birth of tiger quintuplets.

Handlers at the zoo reported on October 24 that a pregnant white Bengal tiger had become restless and irritable, pacing her enclosure continuously. Less than a day later, following a two-hour labor, she was caring for five newborn cubs, all of them white. Zookeepers and veterinarians are now observing the newborns and their mother carefully to ensure continued health. 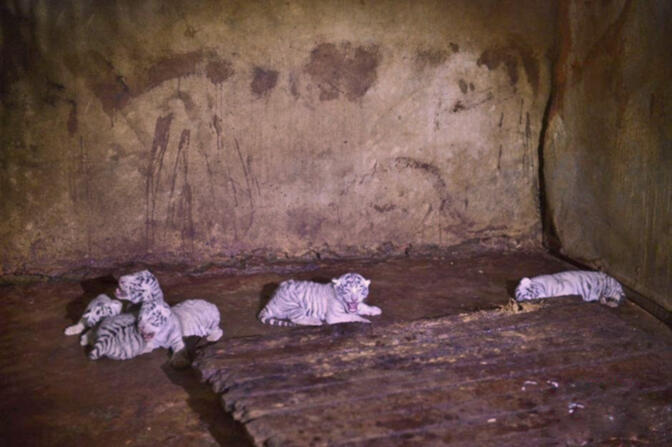 Although all five cubs were deemed healthy, their handlers do have concerns regarding rearing. Female Bengals have only four nipples, meaning the weakest of the cubs could be forced to wait to nurse — or possibly starve — if its brother and sisters prove aggressive. Veterinarians are reportedly working around the clock to step in if such a situation were to arise.

The head breeder at the Yunnan Wild Animal Park told reporters tigers kept at the zoo are typically fed a diet of raw beef and chicken. However, as the pregnant tiger neared labor, she was confined to a specially built, two-room enclosure and is now being given a supplementary selection of eggs, liver and purpose-bred pheasants to augment her health.

The mother — who oddly enough does not appear to have a name — is a six year-old Bengal tiger who has successfully given birth twice in the past. She is one of the zoo's 32 adult tigers. Wild white Bengal tigers are believed to be nearly extinct, although roughly 200 captive animals are kept in zoos around the world. The births this week tie a captive record for cubs first set at the Yunnan Wild Animal Park in 2010.

Bengal tigers once ranged across Bhutan, India, Bangladesh and Nepal, but are now concentrated in small protected pockets of the latter three countries. Currently, 2,500 of the endangered animals are estimated to live in the wild. Bengal tigers grow to between two-and-a-half and three meters long, and weigh anywhere from 180 to 250 kilograms. White Bengal tigers — whose appearance is caused by their conspicuous lack of a gene associated with fur pigment — typically grow to be slightly larger than their orange cousins.

The births are seen as a boon for the Yunnan Park. White tigers are not only a rare sight, but hold special significance in Chinese mythology. In Daoism for instance, the cardinal direction 'West' is represented by a white tiger, who also symbolizes autumn. That the five cubs in Kunming are not only white, but were also born in October, is no doubt an propitious public relations bonanza for the zoo where they are kept. 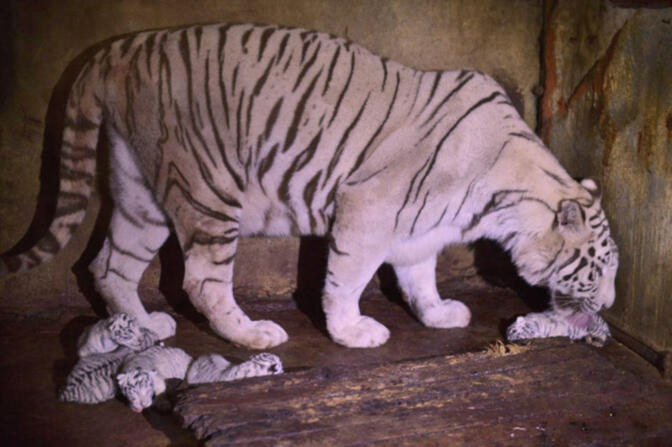