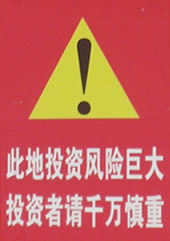 Tenants of the dining and shopping development known as 'Kunming Foreigner Street' have had enough, it seems.

A dozen of the tenants in the new development located inside popular dining and shopping alley Wenhua Xiang (or 'Culture Alley' in Chinese) are displaying bright red signs which state: "Investing here is extremely risky; investors please be extremely cautious."

This is but the latest twist in the Kunming Foreigner Street saga. The plot of land was once a vibrant - albeit rundown - collection of homes, stores, bars and restaurants, including the first Pizza da Rocco. In 2005 the plot was razed and work began on the development, which was named after the popular Foreigner Street in Dali.

During its construction, the plot was surrounded by a wall of advertisements for the development featuring laughable English misspellings plus photos of beautiful Chinese women, well-dressed and inebriated foreigners and high-end developments including Shanghai's Xintiandi. Nearly a year later, a bright yellow and brownish-red behemoth was unveiled to an unimpressed public.

Many area residents were already upset with the development because of the tendency for noisy construction and deliveries of gravel, bricks, rebar and cement to take place as late as 3am. Rumors of loud nightclubs and karaoke bars moving in had also created a general wariness of what was to come.

Restaurants and shops began moving into Kunming Foreigner Street early this year, but more construction was necessary, as all the spaces were unfinished. This meant more noise for locals as tenants worked on finishing and adding onto the concrete boxes they were provided.

Once the majority of tenants had begun commercial operations, restaurants began offering sidewalk seating and also put carts selling foods including smoked meats and ice cream out on the sidewalk. The development was not equipped with any garbage disposal system, so tenants were left to dump their trash in the street, or more popularly, in front of the existing businesses closer to Wenlin Jie that had made Wenhua Xiang one of Kunming's more popular streets.

In late spring, more than 100 retired professors from Yunnan Normal University who live in a residential area behind Kunming Foreigner Street filed a petition with the local government asking for the development to be cleaned up. Shortly afterward, all outdoor seating was banned, and a trash removal system in the form of a man on a three-wheeled cart with a snow shovel were introduced.

The outdoor seating ban stung Kunming Foreigner Street's restaurants, many of whom were getting much of their business through sidewalk dining. Many tenants have cited Wuxin Realty's promise of outdoor seating rights as one of the main reasons they decided to gamble on what is some of the city's most expensive commercial real estate.

Now, feeling cheated and trapped, Kunming Foreigner Street's restaurants and shops are giving potential tenants dire warnings of the risks involved in the development. This episode is a good example of the palpable tensions between developers, tenants, area residents and the local government. We're not property experts, but it seems passing some rational zoning laws plus strengthening and enforcing sanitation regulations would go a long way in this town.

For more on this story in Chinese, read here.

I am very sad that a petition by 100 former teachers, or whomever, could end the wonderful outdoor seating in front of restaurants on Foreign Street.
It was a great place to relax and enjoy Kunming. It was a great place to meet people.
Most cities in the world welcome street cafes and encourage them. It is really odd that this policy would be so quickly adopted without much discussion and debate in a city such as Kunming -- with all the publicity and promotion in trying to make it a tourist and foreigner-friendly place to visit, study, work, do business and live.
I suggest the owners of establishments on Foreign Street start immediately in gathering signatures for petitions to submit to counter this recent policy.
I believe things can be reasoned and worked out. Certainly there are many local people, business people, students, teachers and tourists who wish a retraction of this new policy which bans outdoor seating and dining.

yes i agree it makes sense

Interesting to read this & compare with the mess the street is now. The zoning laws must be goofy, or avoided for a price, if indeed they exist at all.

It is sad is a facility is lost, but I think the fault lies with the developer, don't be too quick to blame the 100 local residents.
The business owners also seem to be placing the blame squarely at the door of the developer.

The residents were quite used to the usual antics of Wenhua Xiang. It is the new development that has changed things. It seems like things are outside of the law.

In Chenggong you can not put a sign out on the street or the Chengguan will confiscate it and levy a fine. Even though there is a street market.

I have seem the same thing happen in other cities. An area is developed and the developer does not get certain planning permissions for activities on the sidewalk. In Zhengzhou there was a place with a 15m wide sidewalk, and the street was full of restaurants that had outside tables, and still there was room for car to drive up and down the sidewalk. It was soon stopped.

Same happened to areas of Shanghai.

I don't know any of the local residents on Wenhuaxiang, but I'd be very surprised if they like the current situation.

If you think wenhuaxiang is busy at night - try the night markets in Taipei, HK, & Kowloon!

is it a matter of busynoise? doubt it. and do those taiwan hk night markets generate the trash and discarded food, and just dump it on neighboring areas? taipai and hk ers wouldnt even dream of doing that.

would hk and taipai allow food tables on the street except in desibnated areas? would a hk taipei developer get away with lieing to investors about basic stuff like legal constents?

Try other night market areas in Kunming, the one on Wenhuaxiang has gotten...weird, over the last 4-5 years. I have a feeling many of the folks who go there, mostly in their 20s & 30s, to 'shop', think of it as somehow a 'fashionable' place.