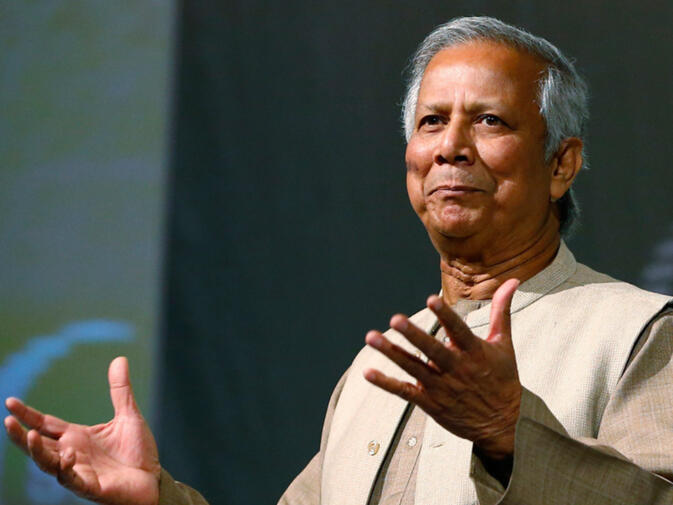 "Today, the Grameen Bank has 8.5 million borrowers, and such a large bank originated simply from lending money to villagers out of my own pocket. From a small village to the whole country, we give loans to the poor so that they can start and gradually expand their own businesses. In turn, these borrowers eventually became shareholders in the bank," said Muhammad Yunus, the famous economist, winner of the Nobel Peace Prize and founder of the Grameen Bank in Bangladesh.

He shared his life experiences with students and teachers recently at the Southwest Associated University Forum held at Yunnan Normal University (YNU). His speech centered around the theme of "creating a world free of poverty and unemployment".

Muhammad Yunus is the third Nobel Prize winner to speak at the Southwest Associated University Forum. After the speech, he was appointed Professor Emeritus at YNU and also set up the Yunus Social Enterprise and Microfinance Center at the university. marking the beginning of cooperation between both sides. Professor Yunus said, "We will not only set up such platforms and provide opportunities in China, but will also be committed to spreading such cooperation to the entire world."

Professor Yunus says the bank he started does not belong to any one individual, but instead belongs to the community. It mainly aims to solve social problems rather than make money. During this process, the Grameen Bank has also grown. Yunus believes that everyone has an altruistic self. When this part of human nature is introduced into business operations, the bank was created. He hopes to enable more people to play their part in future economic growth.

Professor Yunus wants to build a different system so that all people can use their own resources and creativity to solve problems. "I believe that China and many other countries are making such attempts, and I also hope more universities can join us. That's why I have set up the Social Enterprise and Microfinance Center at Yunnan Normal University. I hope more people will join in its studies, constantly promote its development, and bring benefits to more people."

In his speech, Professor Yunus shared his overarching dreams. He hopes that Bangladesh will achieve zero extreme poverty by 2030, and the world will be free of poverty in the future. He also hopes that the world can one day achieve full employment and everybody will have the chance to become a job-creator. Yunus also envisions a time when the environment is more properly balanced and people set an example for future generations by minimizing greenhouse gas and carbon emissions.

The Nobel Laureate believes that some economic theories are distorting human nature because they assume human beings are selfish and always striving to make money. At the Grameen Bank, he has seen many young people who are passionate and willing to change the world, so he is willing to make similar efforts of his own. Additionally, Professor Yunus reminded students attending his speech not to be confined by the framework of simply seeking work, because "looking for jobs" has become outdated and students should strive to create work for themselves.

Editor's note: This article was written by journalist Li Sijia (李思家) and first published on website Yunnan Express. It is republished here with permission.

Yunnis did a fine thing with Grameen Bank, but the contradictions between capital and labor remain, and grow, both locally and globally.