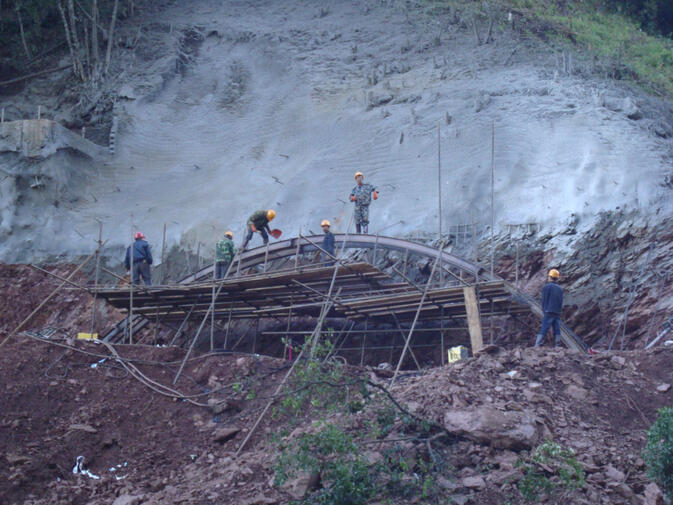 Work continues on the Darui Railroad in western Yunnan

Hundreds of highway and railroad projects are facing delays or otherwise running far behind originally envisioned construction timetables. This, according to a report issued by China's National Audit Office, is a result of local governments improperly managing infrastructure funds — actions thought to have a direct effect on the country's stalling economy.

In total, the audit of projects nationwide looked into 815 infrastructure programs across the country. More than 20 percent — 193 in total — were found "to be experiencing significant implementation lags due to a lack of funds or poor initial planning." Together, the behind-schedule ventures represent government investment of 287 billion yuan (US$45.2 billion).

The architects of China's economy have traditionally relied heavily on state-funded building projects as a means to revitalize the financial system in times of decline. Therefore, those lagging behind schedule due to mismanagement or misuse are seen as harming the economy in two ways, according to the audit. Not only are funds not being spent as quickly as they are authorized, but the benefits to localities through which new infrastructure projects pass must wait idly for any expected economic uplift.

In Yunnan, this is especially true in the province's west. A railroad from Dali — traveling through Yongping, Baoshan, Mangshi and terminating at Ruili on the Burmese border — was originally expected to be completed in 2014. It will provide some of the most populated regions in western Yunnan direct rail access to Kunming for the first time ever. However, due to cost over-runs and awkward mountainous terrain, the line is now expected to open as late as 2019.

In an effort to speed up construction along the single-track Darui Railroad (大瑞铁路), Beijing injected a further five billion yuan (US$788 million) in annual funding for the endeavor beginning in 2012. The 335 kilometer railway is 75 percent tunnels and bridges, making for difficult surveys and slow progress, especially in places where engineers must dig under the Gaoligong Mountains.

The railway was first conceived of in 1938 as a way to connect Kunming with the British colony of Burma. The outbreak of World War II scuttled those plans. However, they have since been resurrected as one part of the massive BCIM trade corridor, which Beijing hopes will one day provide an overland link between Kunming and seaports on the Indian coast some 2,800 kilometers away.

If anyone's interested in the British project referenced in the article, I wrote the Wikipedia article on it (and took the photo while on a cycling trip years ago) over here: en.wikipedia.org/wiki/Yunnan%E2%80%93Burma_Railway

Possibly linked, but read between the lines about some being hesitant to move. www.theguardian.com/[...]

Actually, fantasies about rail connections to Burma go back to the 1870s.

"a result of local governments improperly managing infrastructure funds — actions thought to have a direct effect on the country's stalling economy."

In the past, high profit margin projects were easy to manage, but now with tighteneing margins they need to adapt which i dont think they can.
China is a very disorganized country(other than the top 10%).

I'ts going to be a long road ahead for them.

"China is a very disorganized country" - well, it's all comparative.