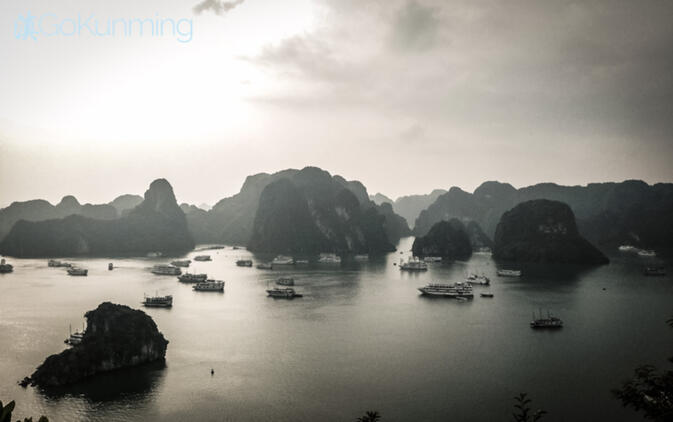 Geographically speaking, Vietnam is one of Yunnan's closest international neighbors. Although only six hours away by train, it might as well be an entire world of separation for all its differences. Crossing the Red River from Yunnan into Vietnam's Lao Cai Province, many traces of Chinese culture disappear. Gone are mixian and dumplings, replaced with fresh-baked bread and pho.

Most notable amongst the differences is the presence of the ocean. Being landlocked, Yunnan's biggest natural attractions are its mountains and valleys. The nearest major Chinese beach spots are in Guangxi and Hainan, both a flight away from Kunming for the hasty. In Vietnam, the Gulf of Tonkin — Hạ Long Bay in particular — drives a level of beach-going tourism that Yunnan will never compete with.

In discussing Hạ Long Bay, two things need to be clear. One, it is incredibly commercialized; and two, its natural beauty makes it entirely worth excusing that fact. In many first-timers' experiences, they take pre-arranged tours, so the attractions are relatively uniform. 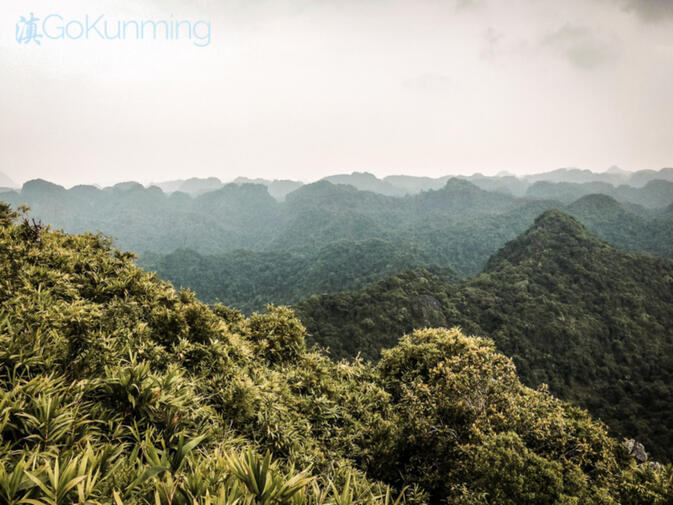 From Hanoi to Hạ Long

The bus arrived at my Hanoi hotel at 8am. It was filled with a handful of sleepy tourists and one entirely-too-chipper tour guide. Her name was Nana, she was 21, started every sentence with the word "yeah", and clearly dealt with Westerners on a regular basis. We drove through Hanoi's old town, picking up the remaining tour participants, before starting on the three-and-a-half hour drive to Hạ Long Bay.

Just about everyone in the group, with the exception of the two guys from India, was taking the three-day, two-night tour. Despite this, or perhaps because of it, Nana made bizarre attempts to foster temporary group unity. This was a recurring element throughout the next couple days.

About halfway to the bay, we stopped at a laughably obvious tourist trap. Pitched to us as a "happy room" — read "bathroom" — break, we had to walk past young people weaving, and then through several shops, in order to reach the café and the restroom. For thirty minutes, our group waited awkwardly on the far side of the action until our guide realized we were not going to buy anything. 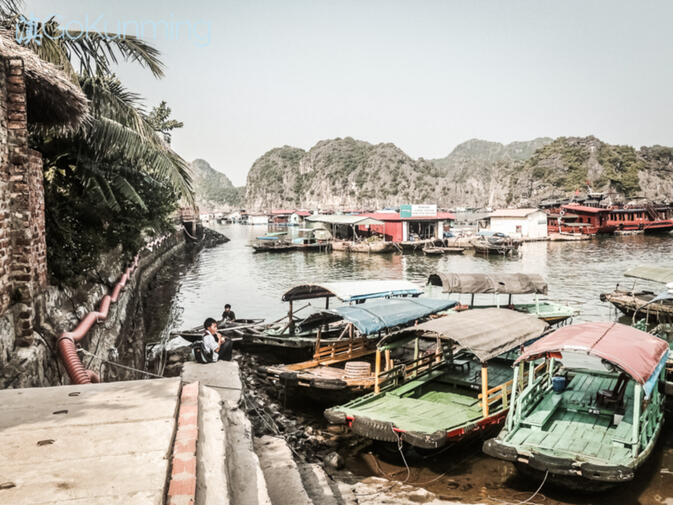 After reaching the bay, our group was immediately spirited onto a ferry to take us to our actual boat. For what was likely insurance reasons, we all had to wear lifejackets for the 150-second boat ride. Once we made it to our ship, a junk called the Fantasea, we were ready to go.

Forty-five minutes later, we were surrounded by a maze of islands. Big and small, they were present as far as could be seen. This is what millions flock to the bay in order to see, and it was worth it! With a mix of small fishing boats, and large junks throughout, it could have been the nineteenth century, let alone the twenty-first, for how timeless the vista appeared.

Our first real stop was 'Surprise Cave', which was ironically the most mundane of our destinations. The designated activity was comprised of hiking up into a 'surprisingly' large cave complex, exploring it and following the path back down to the boat. The real downside here was that it appeared every single tour going on that day was there at the exact same moment. It was crowded, and had places to buy water every ten feet, so the cave's grandeur was somewhat diminished. 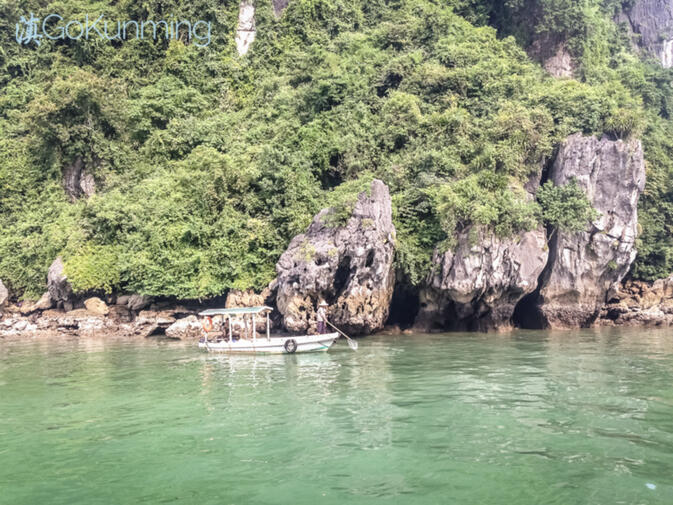 At every point in the three days, there were shops and stands everywhere, with incredibly inflated prices. Some locals obviously knew this, and saw an opportunity to profit. It was a highlight of a few of the stops to see enterprising Vietnamese, in boats filled with discounted food and drinks, undercut the official vendors.

The second stop of the day was to give us an opportunity to kayak. This time, there was only one other group in the area, and the experience felt much more unique. In the hour or so we were allotted, we kayaked through a cave, into an isolated cove, and onto a small beach. This time, no commerciality was felt.

After that, our ship anchored for the night in that same cove. After dinner, Nana made more awkward attempts to make us all bond. First, she tried convincing us that karaoke between ten complete strangers was a brilliant idea. When that didn't work, she tried magic tricks. Eventually, she gave up, and we all bought a couple of drinks and talked on the deck. 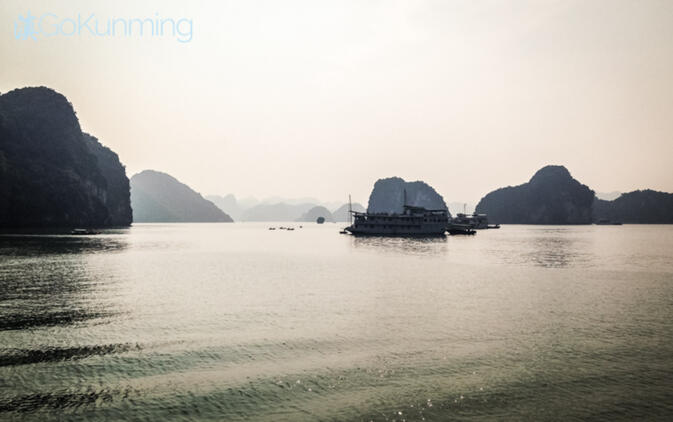 On the second day, our first stop was Ti Top Island. Apparently of importance to the Russians at some point, judging by a large statue of a man at the base, the island features a large staircase up to a lookout. We were given 45 minutes to climb up, climb down, and hang out at the small beach at the bottom. It may have been rushed, but the view was amazing! It was nothing compared to what we would see later, but still.

Our next stop on the tour took us to Cát Bà Island, the main locale of Hạ Long Bay. This is where we disembarked the boat, and parted ways with the Indian men who had only signed up for one night. We were then taken to Cát Bà Island National Park. It was a 45 minute climb, but the views at the top were absolutely incredible. I could see literal waves of mountains in every direction. On the way there, we walked past farms, through a rain forest, and hiked up what seemed like thousands of stairs. It was hard, but a definite high point of the experience.

After the descent back to the base of the park, a friend and I were separated from the rest of the group to spend a night on Monkey Island. When we were signing up for the trip, we were given the option of either staying the night at a hotel on Cát Bà, or at a bungalow on the beach. As it turned out, we were the only ones to choose the latter. 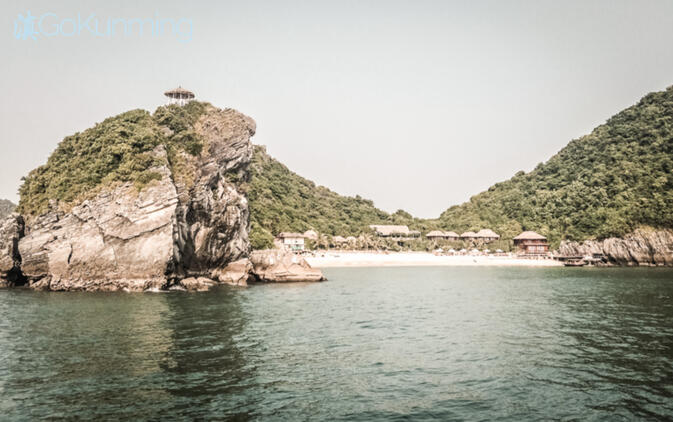 While the town of Cát Bà looked like a nice to place to spend some time, we definitely made the right choice. As our boat made its way to the island, we passed several other beach spots and tourist locations, each nicer than the last. When we finally came to our destination, it was thrilling. Monkey island was clearly privately owned, and had only eight small bungalows for its guests. It was beautiful, and we had it to ourselves. After a day of moderate tourist ridiculousness, and a few months of city life, a few hours on a white sand beach was the greatest relief.

The next morning, it was sadly time to leave our brief seclusion and head back to civilization. Put on a ferry back to Cát Bà, we were given our own shuttle back to the dock where Nana and the original group were supposedly waiting for us. They weren't, but the ride was fascinating anyway. Since our driver only had us as passengers, he used the ride to fulfill a couple personal errands, which included picking up his family, some groceries, and then dropping them off at his home. Not only that, but we got to see the entirety of the island at a leisurely pace. Once we arrived back at Cát Bà harbor, we got back onto our original boat to get back to the mainland, and to Hanoi. 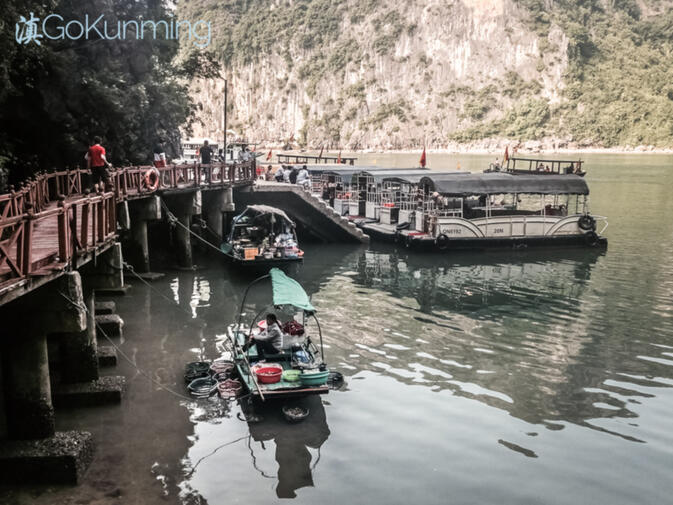 There's no electricity on the island - they run a generator from 6-8 pm and so most tourists stay away. There are a few small hotels and restaurants, though, and you have most of the island for yourself: beaches, mangroves and dunes. But the best of it all is that, for a fraction of the price of a junk cruise, you tour through the exact same rock formations of Ha Long Bay.

There's also a ferry to and from Cam Pha.

I second the recommendation for Quan Lan ... see Wikitravel at wikitravel.org/en/Cai_Rong

If you:
1. Are an experienced kayaker/boaty
2. Are adventurous and in good shape (actively exercise, have stamina)
3. Would like a more free exploring experience

4. Have a decent phone with GPS that you can put markers on, know how to use and can waterproof

Then I recommend the following:

Catch the ferry to Cat Ba.

Stay on Cat Ba island in pretty much luxury
Go to the back of Cat Ba island early morning with a packed lunch and other energy goodies.
Rent a sea kayak (they have pretty decent ones for rent and rent for a whole day).
Go forth and explore.

You can see so much, up close and personal and can decide where you want to go and when. I spent 2 days doing this, going through caves to hidden grottoes, landing on amazing beaches, looking around the local water peoples villages... was gobsmackingly amazing and didn't have any tourist shite. Seriously recommend.

Sounds awesome blobbles. I have two modern carbon fiber sailing trimarans, if you're up for the adventure we could ship them down there and go for a longer distance trip. You can get about 250kg (more if you wish) of passengers + luggage on each boat, and I have two. They're pretty wet boats, though, so we'd need to pick a good season.