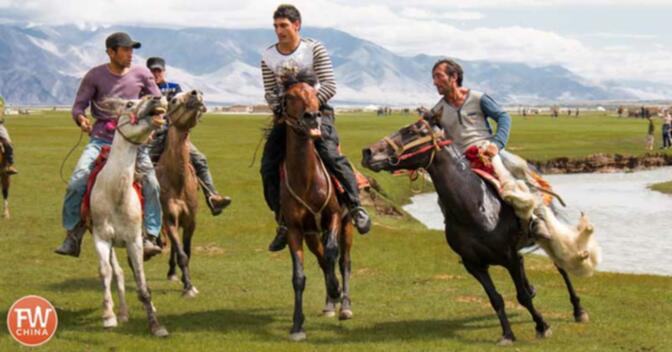 It's a popular Central Asian game that has been around for centuries and yet surprisingly few people in the West have ever heard of it.

It's a traditional game on horseback where a headless goat carcass is the ball and both players and spectators are at risk of serious injury. This is Buzkashi (pronounced "booz-ka-shee"), one of the most fascinating sports you'll ever witness.

During this leg in our bike journey down the Karakoram Highway, we stopped in the small town of Tashkorgan near the border of Pakistan and China to enjoy a couple games of Buzkashi. During that time I was not only able to capture some excellent footage of the game for you to see, we were also able to get a good understanding of the rules and traditions surrounding this somewhat mysterious game.

The game of Buzkashi seems to have originated in Afghanistan, where it is still the country's national sport.

Legend has it that the game was first invented centuries ago when Afghan tribes would gallup up on horseback to steal rival tribe goats from their flock. Both defensive and offensive strategies were utilized, which developed into a formalized game whose rules are still to this day a bit mysterious.

• The 'Ball': ln most cases it's a headless goat carcass but some groups also use a calf or a sheep carcass.
• The Transportation: Most games are played on horseback but it can also be played on yak back.
• The Field: While in some cases Buzkashi can be played on an officially marked field, often it is played on an open field with no boundaries.
• The Team: In some countries it's two teams against each other; in others it's every man for himself
• The Objective: For some games the objective is to get the goat carcass in a hole, others in a basket. Some ethnic groups need to get the goat around a flag or into a designated area.

As you can see, there's a lot that changes from country to country with the game. For this reason it's difficult to define the "rules of Buzkashi"...but for some reason I'm going to be foolish enough to try. 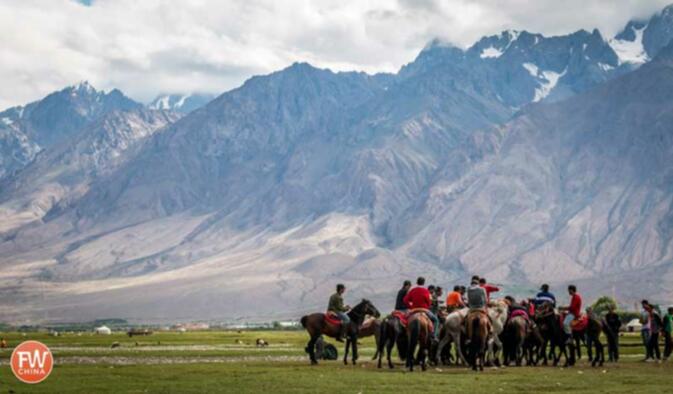 Buzkashi: Rules of the game

No matter which version of Buzkashi you find yourself watching, the basic gist of the game remains the same: players on horseback (or yak) are struggling to take control of a headless goat carcass in an attempt to drag it to a designated hole/flag/zone.

That's it. The number of points needed to win or the number of games played in a match isn't set (something I'll go into more detail in the next section).

While most games throughout the plains of Central Asia aren't governed by a referee, there are still a few rules that players expect others to abide by:

• Players cannot attach the goat carcass to their saddle; all 100+ lbs must be held by hand or wrapped by the leg.
• Players must remain on their horse/yak at all times to be eligible for play.
• Players may whip their own horses and those of their opponents, but they cannot hit other opponents in an attempt to knock the carcass out of the grip of their hand or leg.

Other than that, it seems that most anything seems to go. Players and horses often walk away from games bloodied or worse (think broken bones, dislocated shoulders, etc.). For this reason, it has been said that "this is what polo would look like if played in prison". 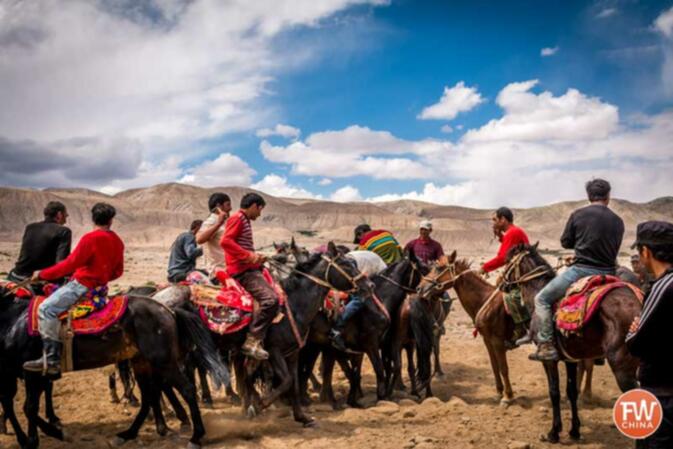 Different ethnic traditions govern the playing of Buzkashi throughout Central Asia. In some countries like Afghanistan, the games are very formal and often involve the sponsorship of teams or individual players by a wealthy benefactor.

In countries like Tajikistan or among the Tajik people of Tashkorgan in China's Xinjiang region, the games are more often associated with a wedding. As part of the festivities, the father of the bride is often expected to sponsor games of Buzkashi.

The games that I personally witnessed were part of a local wedding. The father had put up about 5,000 yuan (US$850) per game, with each point being worth 500 yuan (US$85). Each player who scored a point was awarded this monetary prize and whichever team scored the most points was awarded a larger prize such as a TV, refrigerator or washing machine.

In this way, the number of points needed to win or the number of games being played is all dependent upon how much money the game's benefactor — be that a bride's father or wealthy member of society — is willing to donate. 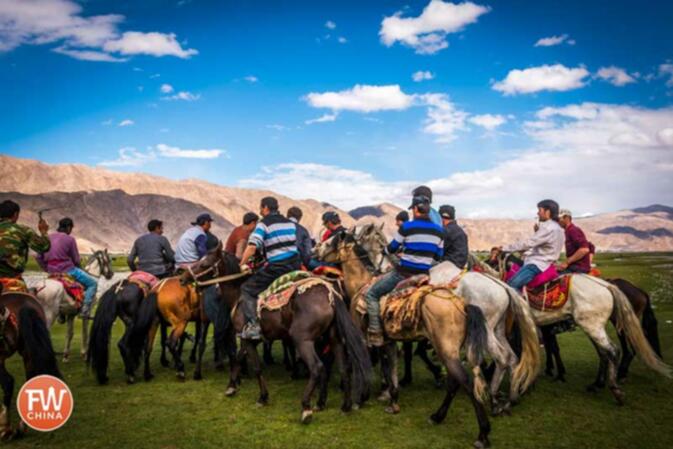 The game of Buzkashi isn't very well known in general, but there is some fun trivia surrounding the game that I think you'll find interesting. This includes:

• The name 'Buzkashi' literally means 'goat grabbing' when translated into English.
• Buzkashi was featured in Rambo III (1988) when Sylvester Stallone was actually seen playing the game.
• When the Taliban came to power in Afghanistan, they banned the game of Buzkashi.
• In the 1940s, a group of men in Cleveland, Ohio introduced a version of the game in the United States. They called the game 'Kav Kaz'. Unfortunately, this lasted for less than a decade.
• Before the game, the goat carcass is often soaked in water for 24 hours in order to toughen the skin and make it harder to tear when players pull in opposing directions.
• In some places, a Buzkashi match can last for days.
• The horses are more valuable in a game of Buzkashi than the player himself. In some cases, a horse may be trained for up to five years before playing its first game. 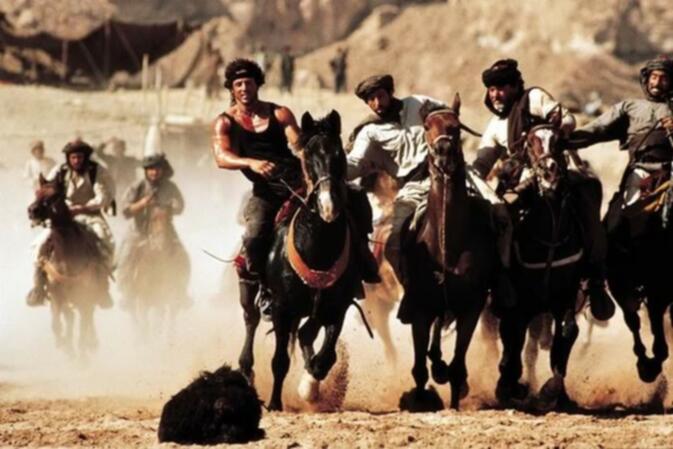 If you have a chance to experience Buzkashi on your own, I definitely recommend you seize the opportunity! It's not only fun to see the game being played, it's also great to be a part of the group of spectators that gather for the games.

For us in Tashkorgan, it was the perfect blend of gorgeous natural scenery (grasslands and mountains), fascinating culture (Xinjiang Tajik) and the traditional game of Buzkashi.

Editor's note: This article was written by Josh Summers and originally published on his website Far West China. It is reposted here with permission.

The game involves some of the most incredibly-trained horses you will ever see. There can be any number of players - scores of payers - and it could never be played unless the horses, in leaping meles of a dozen or more in which riders sometimes fall off, were not trained to avoid stepping on anything on the ground.

In Afghanistan it is played mostly by the Uzbeks, in the north, where a famous chapandoz, or buzkashi player, is regarded by ordinary folk as virtually a legendary hero. This is a guy with enormous charisma and status, a cut above everybody else, and he'll get on his horse and ride 100 meters to buy a pack of cigarettes rather than walk. He is probably over 40 years old and may be over 50. Yet the saying there is, "Better a good horse rather than a good rider". His horse will probably be between 5 & 10 years old.
You watch these guys playing buzkashi and you begin to understand part of the reason that Central Asians have, time & time again, been able to conquer the settled populations south of the great swath of territory that occupies the center of Asia.
Incomparable.