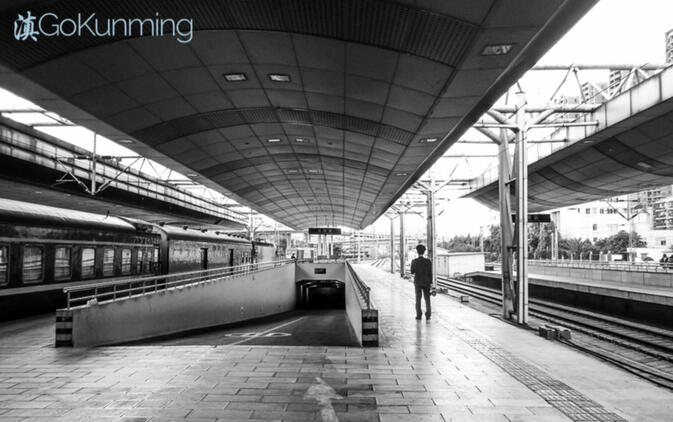 Working my way through the security line recently at the Kunming Train Station, I became a bit nostalgic. The feeling was initially sparked by longings for simpler times when automatic weapons were not mandatory kit for the railway police and train travel in much of China barely required any baggage screening at all.

I'm simplifying and romanticizing a bit, but time has a tendency to do that to people. My first trip on a Chinese train began in Kunming and ended a seeming eternity later in Chengdu. I remember it in startling detail — and oddly enough with fondness — because for a young backpacker it was a surreally thorough introduction to the realities of southwest China, even if I didn't know it then.

The trip hadn't registered in my thoughts for years, but as I walked to the departure platform in Kunming several weeks back, the memories started to return. This time, I was headed south to Hekou (河口), completely in the opposite direction of Chengdu, but the station looked and smelled pretty much how I remembered it from 16 years ago.

Back then, nothing I was doing was routine. China was all new experiences, shocks and in general, tended to be utterly baffling. This Hekou trip, by comparison, was just part of a familiar errand. I boarded the train, found my hard-sleeper berth and settled in amidst eerily familiar surroundings. The train was painted the same institutional greens and browns as in my memories, and I once again marveled at the utilitarian genius of each train car's design. Reassuringly, the bathroom was marked with one of my all-time favorite signs, which reads, now as then, "No occupying while stabling". 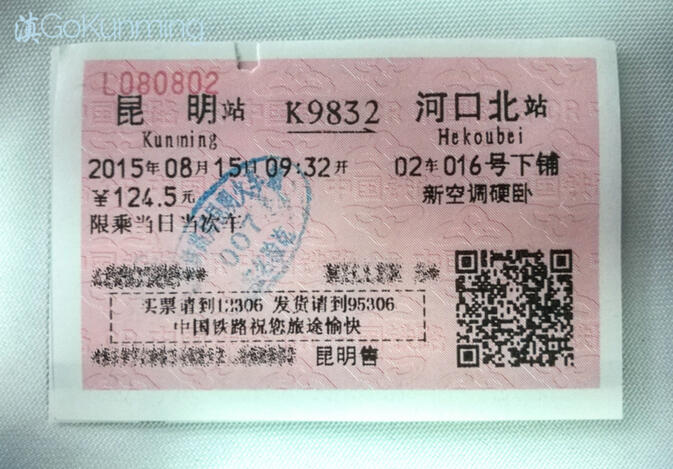 From the view inside, the train could have been exactly the same one I rode so many years ago out of Yunnan and into Sichuan, except this time I had a comfortable bed in an air conditioned car for a trip of only a few hours. The Chengdu journey — and it certainly was one — was via a slow-moving, coal-burning train during the heat of summer. Back then, I purchased a cheap hard seat ticket for a ride that would last 27 hours.

As the train pulled out of Kunming toward Hekou, the gentle rocking motion and familiar creaks and bangs forced the memories of my Sichuan trip to coalesce. I glimpsed snippets of the past while outside the window Kunming's sprawl faded into farmland. By the time we reached Yuxi (玉溪), less than halfway through the trip, my nostalgia had kicked into high gear.

The ride to Hekou is not a particularly beautiful one, largely because much of it is spent in the blackness of tunnels. But it was this darkness — and not a little boredom — that spurred thoughts of the past into the forefront of my mind. My first train ride to Chengdu was a never-ending series of tunnels. We would stop in them to let faster trains pass, while the locomotive engine continued to belch a steady stream of steam and soot.

The windows of the train were all flung wide so we passengers wouldn't stifle in the summer heat and humidity. It was a completely reasonable solution, until we stopped in one of those damn tunnels and the cars filled almost completely with ash and smoke and soot. Already covered in sweat, those of us sat three abreast whiling away our time in the hard seat carriage were tinted an ever-darkening shade of black. 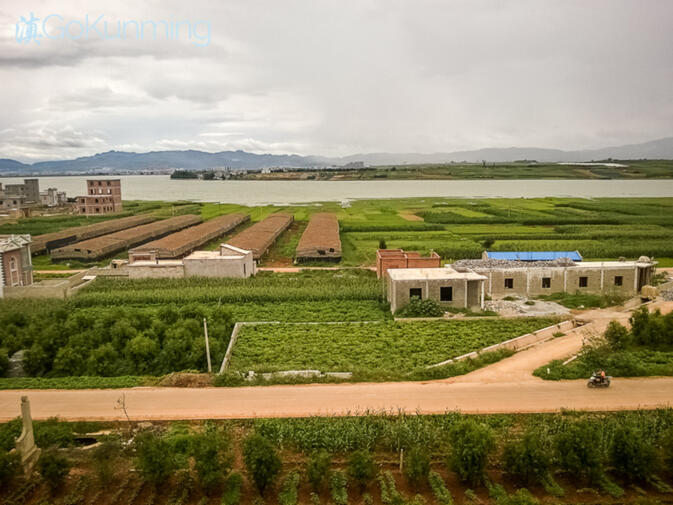 I had not thought to bring much food or water of my own and subsisted on fantastic mangos given to me by other passengers and supplemented with bottled water from a trolley that seemingly came through once every other day. It was, in my extremely limited experience, the most uncomfortable I had ever been.

At first, my reaction to the general discomfort was grumpiness, which quickly enough bled into anger. Getting upset had little effect on my actual situation, so the next and final phase of the emotional rollercoaster was complete and utter submission. It got dark, and I yearned for the escape of sleep. Sitting bolt upright on a wooden plank didn't suffice for a bed.

Eventually — and my travel partner first pleaded and then cursed me for this — I slumped off my seat and settled onto the floor underneath. I could almost stretch my legs. Bliss! I woke up a few hours later, slightly rested but also covered nearly head-to-toe with all manner of garbage. Sunflower seed shells, tea leaves, cigarette butts, the remnants of sticky congealed drinks and god knows what else matted my hair. Someone was using my back as a footrest.

Struggling to my feet, I stumbled to the bathroom to try and clean up and, fortunately for me, I was one of the last people in the train car to use the sink. The water had run out. The immediate implications for the communal toilet were dire. The ignominies piled on and on, capped off by an attendant calmly collecting the dozens and dozens of styrofoam containers used to serve breakfast into an enormous trash bag. When finished, he strode to the rearmost window of our car and unceremoniously dumped the contents into the lush green forest outside. 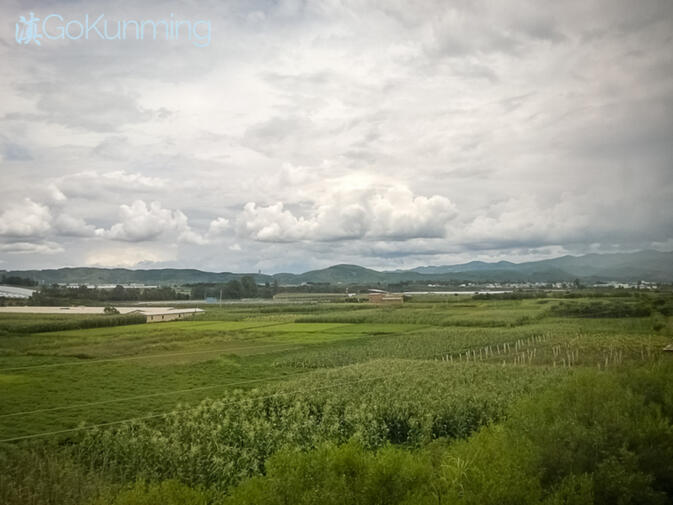 It was all too much. When we pulled into the Chengdu Train Station hours later I was a complete mess mentally, and vowed to punch anyone with the temerity to approach me — helpfully or otherwise — in the face. Of course this didn't happen when a young woman with passable English walked up to me and my friend and asked if we needed a hostel for the night. My bluster and anger evaporated and I forgot I was a sweat-soaked, soot-black shambles with garbage in my hair. We followed this angel silently to a cab, happy our ordeal had come to an end.

All of these memories came back to me with shocking and crystal-clear alacrity as the train headed toward Hekou and the border with Vietnam. So too did other memories from that woe-begotten trip — the vast majority of them positive. The hard seat to Chengdu was the first time I ever remember being ok with strangers unapologetically staring at me one moment and offering me food the next.

I learned that spoken language was, for the most part, not a necessity for getting to know people. I grew comfortable not understanding what anyone was saying and not worrying whether they were talking about me because I was different from them, and them from me. And, perhaps more striking than anything else on that ridiculous trip, I witnessed the absolute calm patience possessed by many elderly Chinese. I fell in love with the beauty of it, and with the train that opened my eyes to a world I now can't leave. 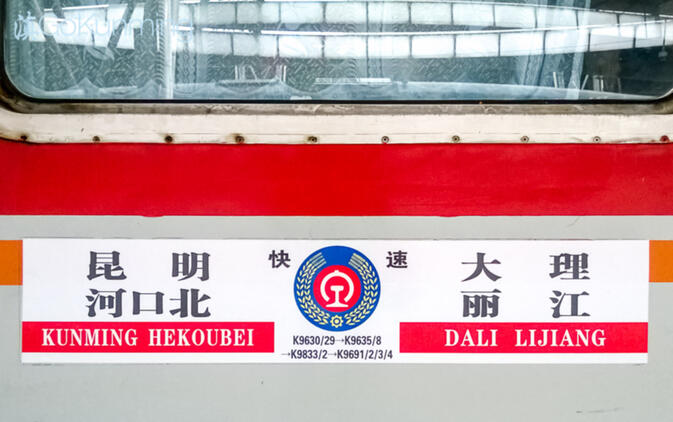 I remember Beijing-Guangzhou hard seat 30 years ago, I slept where you did - not the best of my memories, and it's still a bad idea to do more than about 6 hours hard seat on a train, in my opinion - considerably easier on a bus, harder and more inane on an airplane - anyway, train hard sleeper for anything overnight works fine for me, considerably better than a sleeper bus.