By Patrick Scally in Features on September 3, 2015 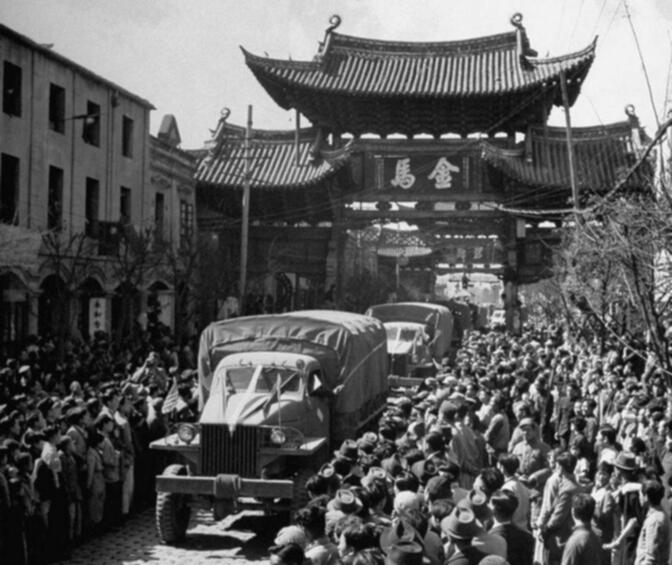 The streets of Beijing are abuzz with patriotism, filled with goose-stepping soldiers, gleaming new military hardware and bedecked with five-star red flags. It is the seventieth anniversary of Japan's formal surrender in 1945, an act that brought the cataclysm of the Second World War to its official end.

While the capital celebrates and hundreds of millions watch the Beijing parade on television, Yunnan residents quietly reflect on their province's stand in what is officially called the 'Chinese People's War of Resistance Against Japanese Aggression'. Although no parades will be held this year in Kunming commemorating those who fought and died, Yunnan's stature as one of China's last bastions of hope remains undiminished, if often a bit misunderstood.

The vicissitudes of history — especially in a war fought on as many fronts as World War Two — leave thousands, if not millions, of stories untold. In Yunnan, the general narrative has by now been boiled down to three major fronts, all of which effected one another. They include the development of Kunming as China's last ditch air base, a months-long engagement in the mountains of western Yunnan and the opening of the Stilwell Road. Although those three events do not comprise the entirety of the war effort carried out South of the Clouds, they go a long way toward creating a general overview. 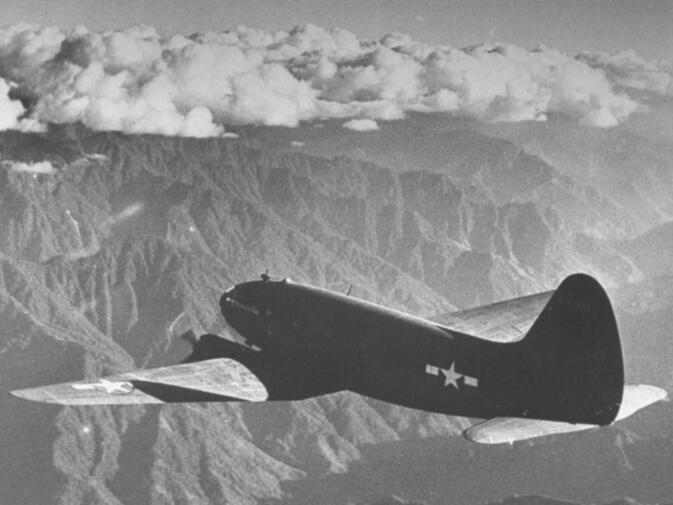 The China National Aviation Corporation, The Flying Tigers and The Hump

Few know that the foundation of the province's current airport network was laid more than 70 years ago by Americans and Chinese working for an often-misunderstood Chinese/American-owned commercial airline known as China National Aviation Corporation, or CNAC. Founded in 1929 by aircraft manufacturer Curtiss-Wright, CNAC ran into difficulties dealing with Chiang Kai-shek's Nationalist government and was sold to Pan American Airways in 1933.

CNAC fared better in China under Pan Am management and began to service routes linking the United States, Pan American's Pacific network, and China's major urban centers, first flying into Kunming in 1935. Runways were hard to come by in China at the time, and CNAC had a competitive advantage with its river planes, which often made water landings on the Yangtze and other waterways.

War was to quickly alter the fate of CNAC. By the end of 1941, CNAC was making evacuation flights as well as carrying out the dangerous supply runs between India and Kunming for which it would late become famous. When the American Volunteer Group — now more commonly referred to as The Flying Tigers (飞虎队) and credited with bringing down as many as 300 Japanese aircraft during its brief tenure — disbanded in July of 1942, many of its pilots joined CNAC rather than return to the US military. This blurred the lines between CNAC and the Flying Tigers, as the 'original' Tigers were now seen in CNAC civilian uniforms.

As Japanese forces gained ground in southern China and Burma, Yunnan and Kunming became a critical nexus for material shipments and air support sorties. Kunming remained un-captured throughout the war, not only due to CNAC and The Flying Tigers, but also because thousands of local civilians turned out to build and repair airstrips, work as makeshift mechanics and otherwise support Allied troops. 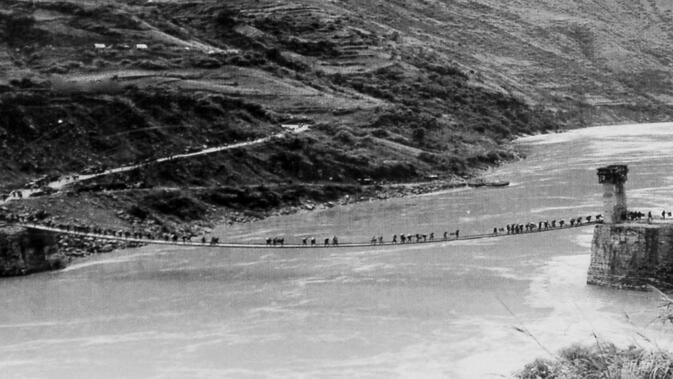 The Huitong Bridge and Ledo Road

During World War II the western part of Yunnan was occupied by Japanese forces. They had effectively cut off the Burma Road that once supplied Yunnan and Sichuan, while simultaneously attempting to stop cargo planes flying The Hump transport route. The planned goal was to march on Kunming and then Chongqing.

The Japanese army could only be stopped from further penetration by blowing up the Burma Road bridge at Huitong (惠通桥), where it crossed the Nu River — then known to the world outside China by its Burmese name, the Salween. General Joseph "Vinegar Joe" Stilwell, Allied commander of the China-Burma-India Theater, worked hard to reopen the Burma Road because he saw it as the only way of getting in enough supplies and heavy equipment to fight the war further east into China.

Under his command, American engineering battalions began to cut a road through the north of Burma from the Indian railhead town of Ledo, planning eventually to link up with the original Burma Road at the Chinese border. To recapture the ground through which the supply line needed to travel, Stilwell launched the Salween Campaign. He used the Chinese Expeditionary Army, first established and trained in India, as a vanguard.

This force was made up of Chinese army units cut off from the mainland by Japanese attacks on the Burma Road, as well as other reinforcements flown in on empty Hump return flights to India. These men were known as the X-Force, while the American-trained and supplied Y-Force operated from Yunnan. 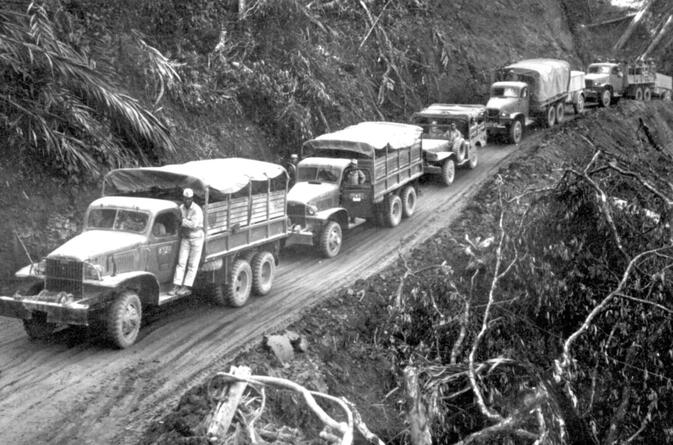 The Y-Force, with the assistance of American supplies, technicians and tactical advisers, forded the Nu River beginning on May 11, 1944. On the first day some 40,000 troops crossed the river with the help of 398 American rubber boats and countless bamboo rafts. In the days that followed, 60,000 more troops and thousands of pack animals carrying supplies crossed the river. The Japanese had not expected an army of this size capable of crossing the rain-swollen river, and were taken by surprise. However, they were able to hold up the enormous force because they retained control of the passes along the Gaoligong Mountains.

The Japanese base at Songshan controlled the Huitong Bridge across the Nu River. The stronghold — referred to as "Gibraltar on the Burma Road" — proved extremely difficult to capture. First, the Chinese tried to storm it en masse but were forced back again and again, each time with heavy losses. Next, the Chinese started to construct trenches up the mountain, but in the end this did not work either. Finally they undermined Japanese command and supply bunkers by digging long tunnels though the mountain. Using tons of US-supplied TNT, the force blew up the mountaintop on August 20, 1944.

Even then there was stiff resistance and the mountain stronghold was only captured on September 7, following more than three months of heavy fighting. The victory was secured at a cost of 7,600 Chinese lives and those of some 3,000 Japanese defenders.

On January 12, 1945 the first convoy left India and followed the recently captured and repaired road. It arrived on February 4 in Kunming, over a twisting thoroughfare by then named the Stilwell Road. The vital supply line combined the original Burma Road — its 900-kilometer Chinese section built by an estimated 200,000 civilians in only eight months — and the US$150 million American-constructed Ledo Road.

The Yunnan front was an incredibly crucial one, for the Allies in general, and China specifically. The once sleepy and forgotten province awoke to the misery and destruction of war and responded more than admirably. Following the war, Yunnan and it's people attempted to return to a normality that included a newfound pride of place that remains with many to the present day.

A really fascinating period, and Pat has written a fine summary - but there is more. These events, which occurred in what the overall Allied Command considered the least important military front, but were crucial to the Chinese war, which really began with the Japanese taking of Beijing in 1937, are full of good stories and fascinating characters. A new museum to be built in Baoshan will cover the frontier war with the Japanese who came up through Burma, hopefully without intentional distortions.

The museum is nothing than theatre for the masses, manufactured everywhere & distributed worldwide. Disneyland uber alles.

I hope the new museum in Baoshan will mourn the dead, especially the civilians and commemorate the courage of everybody who had to put up with the war and/or fight in it. But it should also point out that it's all in the past and learn about all its causes so we won't ever feel we have to do what they did - on all sides, and between all sides. Even less helpful is if it paints the Japanese in a bad light.

tonyaod, beautifully said. something I am missing in the mainland. War museum here usually means, hate-generator. Not helpful for getting over the past.

Nowhere does the state want to get over the past, especially the one that the state chooses for the purpose of enhancing its own present and future.